I did go to the HOA meeting last night and kept my trap shut and it was fine. I learned several things I did not know and would not have known had I not been there. Communications is not this board's strong suit.

The most important thing I learned is that when they start handing out fobs, I need to wait and get mine in one of the evening sessions. The building manager is going to be handing them out from his office during the day. Then the HOA president and another board member are going to be doing the same in the lobby in the evenings. I will save myself a whole lotta grief by going in the evening and dealing with the HOA president directly. I don't know what the exact rules are (since communications is not this board's strong suit) but I want one, one as a backup and one for the house cleaner. I'm sure the building manager has been instructed to hand out one per person and will certainly not deviate from that for me.

Just as the meeting was wrapping up, some guy came in to say that a garage door had crashed into his car. We have 6 garage doors leading to 6 isolated areas of the garage. Dude with a tall vehicle with a boat rack on top, waited too long after hitting the door open button. His car was too tall to allow the door enough room to sense and retreat from going down. CRASH! And broke off a piece of the garage door.

We got a note from management that that the garage door was broken and the door company had been called. My car, of course, was in that section. The note did not give any clue if they door company was going to come last night or today or when (communications is not this board's strong suit). So... would I be able to swim this morning? WHO the fuck knows. Guess I'll find out at 4 fucking 30. I did find out that the bus from my house to the gym does not start til 5:30. There were no Car2Go's. I have not activated a Lime car account yet so I could not see if there were any available. Lyft is $7. Ordinarily, I'd just say fuck it but it's the last week!

I had a hard time going to sleep of course. Then I had two very involved, very vivid and very disconcerting dreams. And one dream where some friend of mine (never saw her before) swore that if you took one week off every six month, a gel manicure would not hurt your fingernails at all. It was a busy busy night.

This morning I checked the email and found out a note saying the garage door was fixed. I had a lovely swim.

This morning I've been busily deleting people from my twitter and instagram feeds. I'd really like to eliminate instagram totally but there are just too many good sewing/knitting/crochet entries plus a lot of good local stuff and food. Still there's a lot in my feed now that is just clogging the pipes. And twitter is just drama central.

Speaking of drama central, there are two black furry actors busy as ever this morning.

Big news, though. Biggie is finally big enough to hop onto the bathroom counter! It took a couple of tries this morning but he made it. He nosed around stuff and then just sat my the sink looking so proud of his accomplishment. The Smalls was pretty sad. He'll get there. Meanwhile I found a lovely tray with a lip that is about an inch and a half. All my stuff (pills, toothpaste, inhaler, hairbrush) went into the tray. All the better, I hope, to thwart all the stuff on the counter landing on the floor.

My quilt batting is out for delivery. I so hope it makes the morning run. I'd like to get that test done!

Otherwise, it looks like a regular day. Taking my walk early yesterday was great, temperature wise. So I guess I'll give that a repeat. But, I should get dressed first.

I did, indeed, go out for a walk and it was so nice and cool, I walked up to the park and around - about 2.5 times longer than normal. I also picked up lunch. And checked on the viaduct. It's gone in many spots - most spots actually. But, at two intersections here in my neighborhood, from my street, it looks like it always has.

This is what it looks like closest to my house: 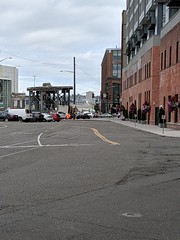 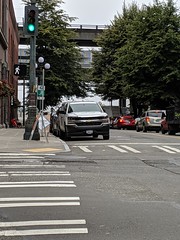 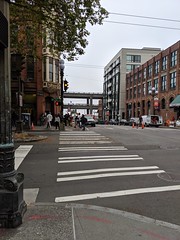 Those last two intersections are where the road is perilously close to buildings (in some cases less than 10 feet). They are going really slowly in those sections.

When I got back from my walk, both cats were sitting on the credenza by the front door... just waiting.

So I told them we could have some quality Stickie time. Only, I couldn't find Sitckie!! Anywhere. So I got out Stickie 2. They played gamely but you could tell their heart wasn't in it. They went to drink water.

So I went to do a little sewing. When I finished and came back to the living room Stickie had returned!!!! A miracle! So we had some quality Stickie time after all.

Here's a shot of Stickie and Sticke 2. Also I love the shadow of The Smalls watching on in this picture. 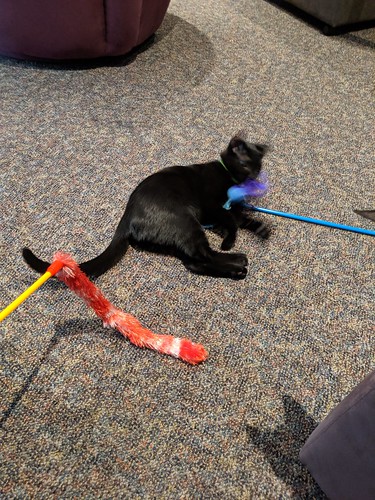 They teach you that if you ever want to see your stuff again, put it away. Not in a little bit, right this very minute.

They show you that when you think you've put everything away, you actually haven't. They will come behind you dragging whatever it is you left out.

They teach you that the thing you wanted to do right now? You really didn't. Not so much. And don't forget to put it away. You can get it out again later when they are sleeping.

Anyone ever grab some toilet paper, blow your nose, and then toss it into the toilet and not flush? Well, you won't do that twice around here. They literally fish that toilet paper out of the bowl and then play with it leaving little bits everywhere so you can see their good work.

And, p.s. Don't measure anything. If you use a flat tape measure, they will chew the ends to shreds. That metal stopper?? So mis-named. And the retracting tape measure? You mean the cat toy with the inches marked on it? Yeah, don't use that to measure either. Kitty nap time is aka measure time.

They make me sooooo smart.
Collapse