I want my cats to have no needle claws. So they need to be perfectly fine with routine trimming. This is best done with early and often mani/pedis's. Last night, Biggie let me trim almost all of his nails without a fight. He lost interested towards the end and two of his back paws escaped the clippers but over all, he gets an A+. I thought he was going to be the hold out but nope. He also digs the rewards - treats.

The Smalls, however, is not one single tiny bit interested in treats. He is interested in snuggling and will happily jump up into my arms for nuzzling. So, when he does, I press his paws to expose his nails. He's not happy with this but he's getting used to it. I also let him chew on the clippers. His front paws are fine for now but his back ones are needing a trim. We'll get there

Their new carrier arrived yesterday. This is the one on wheels that I got 'used' from Amazon Warehouse. The description said 'significant cosmetic flaws' but I sure can't find them. Basically, I just got a perfectly fine carrier for $15 off! 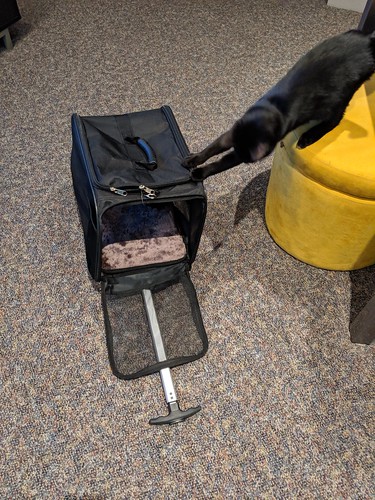 It folds down into a flat pancake for storage which is great. And it's plenty big enough for both of them with room to grow. In the photo above, The Smalls is inside already. The carrier part has a strap in addition to the handle and can be completely detached from the wheels. I thought I'd gotten a large but turns out it is a medium. I think a large would have been too cumbersome. This will be easy to roll and fit on the seat in the car. Nice.

PLUS! When I went to Costco.com to see if I could enter the number and ditch the card (no can do, btw), I discovered that you can now use your phone as your Costco card!!! ABOUT TIME! It won't work for gas or car wash but that's ok. I can keep the card in the glove compartment. I never have my Costco card when I need it. Now I will for sure. Whew.

Today starts Inside Week. There are no clouds to speak of in the forecast for the next nearly 7 days. And full sun. So hot and sweaty. I am too old for hot and sweaty.

I do have a Kindle library book to finish and another one just dropped. And I started a new series on Acorn that has 10 episodes and season 2 is starting in a week so yeah.

This building is trading in keys for key fobs. It's a project that's been talked about for years and promised for last year. They have been doing the install work for several months and have done a very crude looking job of it. Today the newsletter - often full of incorrect and incomplete information - said that they would hand out fobs next Wednesday-Friday and will hand out one per person. Most people need spares for family/houseguests/housecleaners and currently have spare keys. The last time they re-keyed the building there was a massive bruhaha when they tried to limit the number of keys.

Seems like the idiot building manager who writes the newsletter is trying to stir shit up again. He said the details would follow in an email. He did not even need to include that one fob per person shit. What a bozo.

Also, apparently, they picked the fat round fob option instead of the small, slim slip in your wallet kind. My car key is already massive. Buggers.

I took a walk down in the garage - cool and a breeze - and ran into the HOA president we had a lovely chat about stuff including my kittens. I asked her about the one per and she indicated that I'd get my normal key and spare and one for the house cleaner. So whew. I could actually get by without a spare so not a killer for me either way actually.

We've had a lovely quiet day. I made 10 breakfast burritos for the freezer. We played with Stickie a lot. And then just TV and reading. and keeping cool. 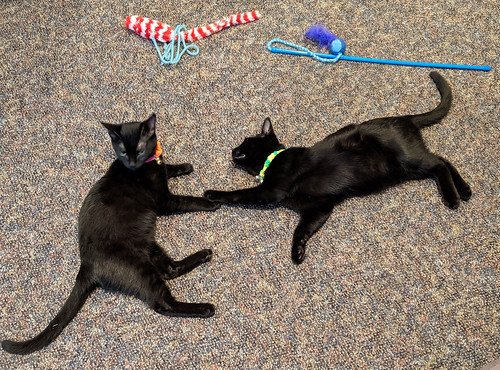 Baseball at 5. But, we're playing Houston who is currently playing amazing baseball so I expect we'll get hammered early and badly. Oh well.

The Smalls enjoyed liking the scrambled egg bowl. It was a great distraction from his 'helping' in the burrito building process. 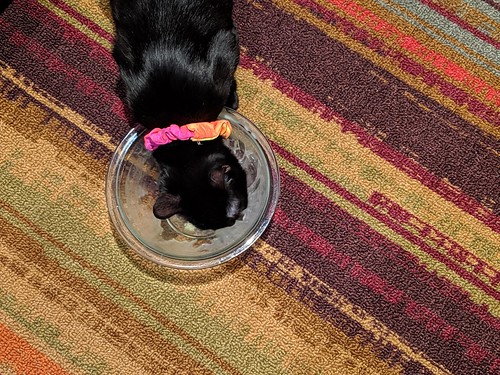