Not me, the cats. They spent 30 plus minutes this morning madly dashing about, fighting over a sheet of paper towel, knocking anything that can find off of anywhere and then chasing each other for no good reason. The Smalls is here on the chair stretched out next to me. Biggie landed elsewhere. They are wild and crazy cats.

I am running out of my beloved hand cream. Ecoya Coconut and Elderflower hand cream is the hand cream of the gods. My friends from New Zealand brought it to me the last time they visited and I was instantly hooked. But, it's only available in New Zealand and Australia. And, even there, not always. They sent me some for my birthday and that's the tube that I'm now parceling out so carefully.

msconduct bought me another tube and will bring it with her when she makes her trip in October. So at least I know where and when my next hit is coming!

My only big plans for today is the Mariner game tonight. It will be a fun one regardless. There's a special pre-game deal for the US Women's Soccer Team and then fireworks after the game. Should be neat.

It's promising to turn into a really hot day so I think the first order of business will be The Walk and then I'll be my air conditioner's BFF for the rest of the day. I have a sewing project that I might work on and crocheting. The usual stuff done surrounded by kitty mayhem.

You've been able to see my living room via webcam for about 20 years now. Initially, I set up cheap little PC attached webcams and streamed them via little Windows programs on my computer. I did it originally to see if I could get a live stream onto a web page.

Then my mother got wind of it and she was hooked. At one point I think I had four or 5 cams going for her alone. "I need to see what you are watching on TV." So, yeah, she used to get on her computer at the 'home' in South Carolina and watch the Mariner game with me.

My brother found the Axis cam first. He had one in his shop. And he got me a deal on one. This was an IP camera that worked off my home network. Quite nicely. That was probably 15 years ago. I did upgrade at some point. But the Axis cam has always been rock solid. Until lately. At some point recently, they put a governor on the system and now it chokes whenever more than 2 or 3 people try to access at a time. Which sucks.

The reality is that today's webcams are made for private viewing. The concept is, you get the cam, then the app and you log into your very private account to see what is on the web cam. In some cases, you can stream to web pages. But, unless you go for the big boy cameras like the kind cities use, everything is private by design.

The Axis was one of the last that let you set it up with no password needed.

The other one is Nest. You can still set up a Nest cam so that anyone can see the stream with a simple URL. It's a whole lot easier to set up and use than Axis actually but I will miss the old cam.

The Axis cam needed an ethernet cable so I snaked one up making art along the way. Here's a photo of it. (Hi, Zoey! miss you!) 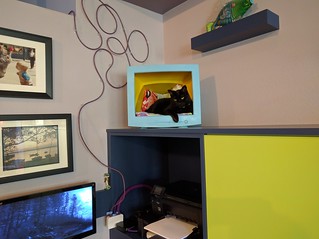 Today I took that all down and patch painted the wall.

I ordered a refurb Nest cam to replace the Axis. It just needs a plug. So simple. But still... then end of an era.
Collapse