The Smalls is The Mess. He now scampers out into the hallway whenever the door is opened and, instead of running back in the minute he realizes what he's done like every other self respecting cat, he just walks down the hallway until he realizes I'm coming for him and then he scampers. Last night, he even went into a guy's unit at the end of the hall. The guy was only marginally gracious about it.

This morning, he climbed up and knocked the minute hand off my Echo Clock. Then he somehow turned on my toilet seat bidet ... I was sitting on the toilet which was fortuitous... I took the lid off that toilet a couple of years ago. I may have to put it back.

Now he's resting up and/or scheming about his next maneuver. Meanwhile Biggie is pretty much the enabler. He's never far away when these shenanigans happen.

Last night's ballgame was a 5 at best. The food was good and the company was fun - Julie and Erica who sit next to me - were there and there was a nice guy in the casino seat on the other side of me. And for several innings the game was fun. And we were ahead 2-0 Then Erica said 'wow this game is going fast'. The end. The game slowed down to a crawl. The Angels tied it up. And the last 5 innings were excruciatingly boring. Erica and Julie left at the 7th inning stretch. Everyone else left in the top of 9th inning when the Angels scored 4 runs.

I have tickets to next Tuesday's game and next Friday's. Hopefully they will be way better.

On one of The Small's escapes yesterday, I got to formerly meet the neighbors across the hallway. We've exchanged emails. They are the ones who wanted to know about my house cleaner. Turns out she was just there yesterday and told them about the kittens. They have a twin to The Smalls only The Smalls was born in Arizona and theirs was born in Hawaii! All were adopted from Seattle Humane. Anyway, they hired Amira to come clean their house after she finishes mine every two weeks. Nice.

After yesterday's biscuit breakfast, I decided to do a taste test. There's a very popular biscuit restaurant chain-ette that has one not far from here. I drove (because it is not far but totally up hill and free parking on Sundays) and didn't even park. The line was out the door. The other two locations are always busy but this one is in the middle of the city government/judicial buildings and left to crackheads and whores on weekends. I was shocked at the line. I came home and made myself a delicious breakfast.

It reminded me of the definition of irony... "No one ever goes there any more because the lines are too long."

Ooops the trouble makers are awake. I need to go clean up the kitchen before they double the job.

I bought a new computer. I have no use for it. No need for it. No reason at all. Well, it was on sale... but, still. Ridiculous. And, of course, I can't wait. I ordered one when they were first announced. The Pixel Slate. But it was just too much money. So I canceled the order. Then Google announced they were not going to make any more tablets and no more Pixel Slates.

Then, today, they reduced the price AND threw in the $300 keyboard for free and they got me. I can still send it back if I come to my senses after I see it/feel it.

It's a million degrees out in full sun. I'm inside with the blinds down and the air conditioner on but watching this baseball game is making me hot. I am so glad my game plan did not include this game. It must be so miserable out there.

My parking place is in the basement. It's a nice, wide, easy in/easy out space and the basement is always a very cool comfortable temperature. But there are stairs and sometimes they are just hard to get up and down. And, one day, they may well be the reason I can't live here any more or be forced to live here without a car.

My neighbor next door has a parking space on the ground level. It's not as nice a space but it does require zero steps to get to the car. He lives in Arizona and rents out the condo. I wrote to him today and asked if he'd be interested in swapping spaces - temporarily or permanently. I'd be happy to pay a couple of thou for a trade but I don't know if he is even remotely interested. It sure would be nice. I keep thinking someone is going to move in but crickets so far. No one has been in for cleaning after the last guys moved out. It's not for sale. No telling what he's planning.

I have a plush monkey that laughs like crazy when it sense movement near its face. Like this one. My brother and his wife left it for me once when they were here for a visit. I love it to bits. I never get tired of the laughing. It's been on the shelf for a while.

This afternoon, I was cleaning up stuff and clearing out stuff and filling up the Goodwill hamper. And I pulled the monkey out and turned it on and left it in the middle of the floor.

Biggie found it first. Sniffed around its butt. And then The Smalls found it and finally one of them went in front of its face but no giggle. So battery dead. But, before I could even get to it to fix the problem, they were both all over it. They have a new best friend! If I turned the giggle on now, it would freak them out. Later. But, for now. Monkey has two loves. 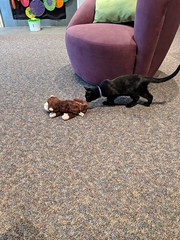 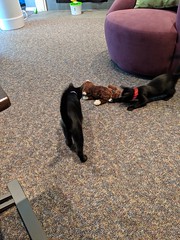 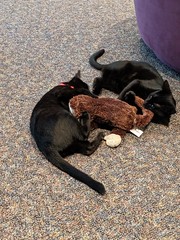