It's house cleaner day. She will be so excited about the kittens. I am going to save her from kitten dodging by using the time to take them to the vet. Their first visit and at least one shot. I think it's too soon for their rabies shot. This is the first time I've ever had a cat when I knew exactly how old it was. These two were born on March 10. It's always been a guess before.

I'm not easily intimidated by much really. I really never was but now that I'm old, I'm like fuck it. Who cares... except the vet. For some reason, vets have always made me anxious. The vet I go to now is the least intimidating of them all but still... and especially with two 'special needs' kittens. My goal is to have him or her tell me that the kittens are very healthy and don't need anything special. Then give me an idea of what's ahead in terms of care. I'm sure that's exactly what will happen but still...

It's very cool out - 65 on my terrace - with a strong breeze and drizzle. I have the door open and both kittens have been out there. The Smalls went out on the ledge and got rained on much to his surprise.

Biggie is pretty much mute. If you step on him, he'll yelp but day to day, hour to hour, he has nothing to say. The Smalls, however, is a catterbug. He's got opinions on everything. In the mornings, when I get up, I first go pee. While I'm sitting on the toilet, he's at my feet just chatting me up a storm. I'm guessing he's either telling me what he dreamed last night or tattle telling on what Biggie did while I was asleep.

About once a day now, Biggie will be in the room with me, napping or watching or just sitting and The Smalls will be in another room. And we hear The Smalls meow. If I didn't know better I would go and check on him, but I know he's just chit chatting to himself back there. Biggie has not learned this yet. At the first sound from The Smalls, he's up and gone to find him and make sure he's ok. It gives me an awwwwwww every time.

At the shelter, they were each up for adoption. There was not even a request that they be taken together but everyone there was delighted that they were not going to be separated. I think they'd be fine cats on their own but together, they are FINE +.

They have both found long lost cat toys and spread others all over the house. I could spend all day every day picking up cat toys and I would not be able to stay ahead of them.

The fountain is still a winner. They both stop there frequently. This means I can deep six the water bowl on the counter and use the real estate for better food dish arrangement. 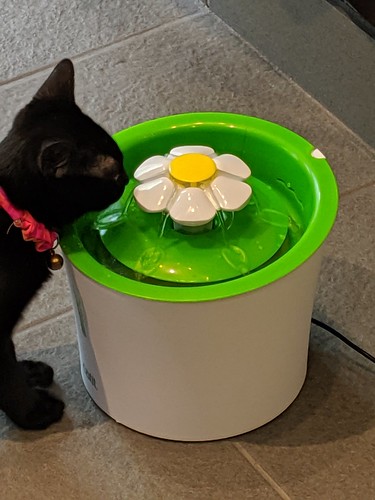 The Mariners - hapless in a good year - are trying to out hapless themselves. They not only have not won a game since the All Star Break, they have not even looked like they understand that winning is the point. Today's game is at noon. And they are off tomorrow... again. Friday I have a Diamond Club ticket so they better have it figured out by then.

I have been thinking about signing up for Showtime. There are a couple of shows and a movie or two that I want to see. But, $11 is just over my ok line. Today, however, Amazon starts a Showtime special of $5.50 per month for 3 months. I'd rather not have to go through Amazon to get there but for $5.50 a month, I'll suffer. I'm sure I can see all I want in 3 months.

They did great. I think they thought it was kitty amusement park. Not a peep out of either one of them to or from and they had a great time examining the exam room. 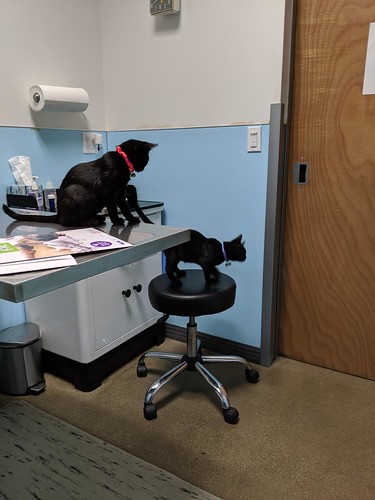 They got shots and their nails trimmed. The doctor said that she thought there was a very good chance they did not have leukemia. She said to bring them back in 3 months for a test. But, she was not that optimistic if they do. She said the chances were good they would get some kind of critical illness in the first year or two if they really are infected. So... fingers crossed.

The are now back up in their scratching post perch giving each other a bath. 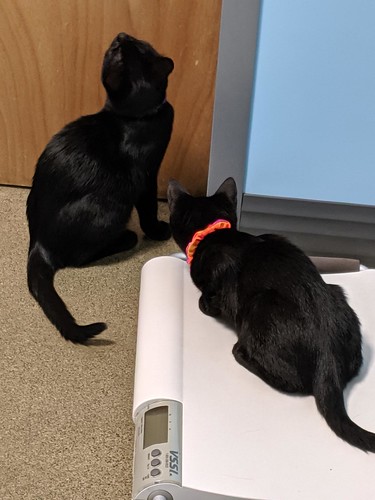 The shelter gave me a certificate thing for a free first visit to one of about 6 vets in the area. My vet wasn't on the list so, no thanks. The bill for both of them was $155 which kind of surprised me. I figured it would be $200 easily. I had them email me the invoice and when I got home, I saw that they marked the $55 first exam as 'complimentary' and didn't charge me for either kitten! I love my vet.

Plus on the way home, I have to go right by the really excellent poke place. And there was a parking spot right out in front! This is the poke place who's 'regular' serving is enough for me for two meals. So. lunch and dinner done!

Turns out the whole experience exhausted them. I'm supposed to watch them carefully for 2 hours. That wasn't hard. Then they got up. Biggie went behind the printer paper shelf (his new favorite spot). The Smalls stayed in the bowl.

Then I got busy and was enjoying the kitten-less time to get stuff done. At one point, I walked into the bedroom to put the carrier away. I had put it on the bed to unzip it and let them out and just left it.

I grabbed the handle and The Smalls, from inside, gave me a very shrill kitty equivalent of WHAT THE FUCK???

So they don't hate the carrier... that's nice.

They follow the vacuum cleaner around and practically laugh at it. They don't even flinch when the garbage drivers bang the dumpsters upside down onto their trucks over and over again.

But, you know what sent them both scampering?

The Sounders (soccer team) Marching Band! They march down the street outside my terrace before every game. These two had better get used to it.

They have been asleep mostly since we got back from the vets. I'm dreading tonight. They will be ready to party just as I am ready to fall asleep.
Collapse