It's coincidence really. And not the only one. I had two things on my Amazon list that had significant Prime Day savings so I ordered them and the total came to $46. I have an Amazon credit card that gives me varying degrees of significant cash back on Amazon purchases. Today was the statement date and this month I got ... $46 dollars back!!

That may be it for Prime Day spending.

The Walmart trip is the continued hunt for the elusive frozen cut breaded okra. Rumor has it that I can find it there. Plus I have a couple of other things on my Walmart list. So that's today's adventure. Not for a couple of hours, though. I want everyone to get to work first.

The kittens did not go to sleep with me last night and were not there when I woke up - no clue what happened while I was asleep. They are wild and crazy this morning. My dirty clothes live in one of those mesh pop up deals which, it turns out, are actually KITTEN PLAYGROUNDS! First they knock it over, then one gets inside and shadow boxes the one outside. The dirty clothes are part of the landscape.

My Twitter feed is evenly divided this morning - immigration and trump hating has moved over for these two camps: Don't Miss These Deals on Amazon and the equally vehement Amazon is more evil than Trump. I really need to get in there with a heavy Unfollow hand.

But, first, I need to get dressed. 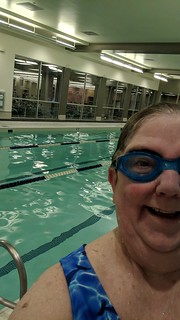 There's a Walmart about 15 minutes south of here (not an easy 15 minutes either) and one 15 minutes east of here (not much easier). Today I went east. No joy. Really. I love Walmart. Seriously, love it. I can always spend a bundle on stuff that delights me. Today, I had a list which I rarely and it was fully of very Walmart-ie stuff. And Walmart had none of it. None. I mean really. I finally found one thing on the list but by that time I was over the whole experience. And frozen breaded cut okra? NFW.

So I went to QFC which is owned by Kroger which says they have it. They do not. They have frozen cut okra. Not breaded.

I came home. And ordered what I wanted from Amazon. Worth the wait.

In the mail for me was a remote control for my ceiling fan. It needed a 9 volt battery. I have a house full of AAA's and AA's and C's and D's and a wide variety of button batteries - even a could of AAAA's. Do I have a Fucking 9 Volt???? no. Geesh.

I put my shoes back on and walked to the market on the corner. They had AAA's only. So I got my keys and went to Grocery Outlet (less than a mile from here). Got the battery AND low and behold they had a bunch of Ben and Jerry's on sale. Wait! What??? They had Vanilla toffee bar! My very favorite ice cream in all the world. I thought they quit making it - They may have, actually. That's Grocery Outlet's game. $2 a pint. I bought 4 pints. Freezer space is the show stopper. Although I may well toss some stuff out and go get more.

And, yes, I already had some. So delicious.

And the remote didn't work on my fan. Return to Amazon but no regrets. If it weren't for that remote, I'd have never discovered the bounty at Grocery Outlet.

We're making a little progress with kitty treats. The Smalls is still beyond indifferent, but Biggie's beginning to feel it. I put some Temptations in a plastic cut with a lid that I can shake and make noise. When he's out and about and comes looking at me, I shake it and then pop the top and let him sniff. Last night I let him chose one. Kitten steps.

And speaking of which... I have one on my side and one on my feet. 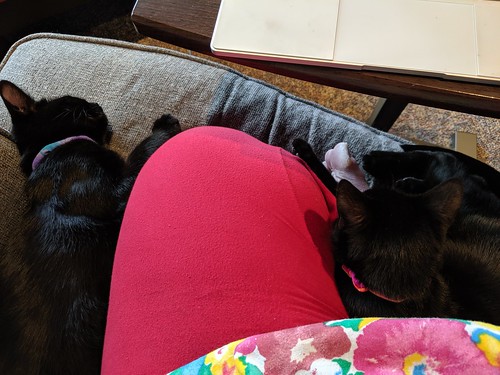 Time now for Acorn TV and the new season of London Kills which became available today. No baseball tonight so between DCI Banks and London Kills and the Bake Off, maybe I should have spotted dick for dinner!
Collapse