About midnight, I got woken up with stomach cramps. Immodium fixed.

About 3 am, I got woken up by an earthquake. No fix needed.

The revolt of the intestines continued this morning. Not horrible but not what you want to take to a swimming pool. So I turned the light off and went back to sleep for a bit. The kittens were not impressed by the earthquake but were sure confused by my sleeping in.

The earthquake was an interesting one. There was no doubt what it was but it was clearly not the big one. It was a gentle rolling one. Nothing crashed. The electricity was not interrupted. Turned out to be a 4.6. It's been a while since we've had one here you could feel. I would be fine if that's it for another while.

It's another cool morning out so I opened the door. The guys have been going in and out - on the ledge, on the table. And, yes, I need to put that grass/plant out of its misery. I need to pick up some potting soil and do some ministering to several of the plants around here. 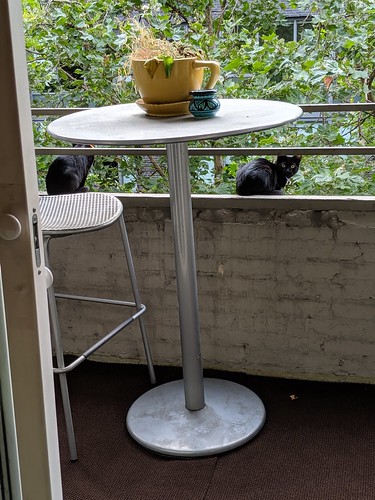 Not today. I do plan to do my walk around the block but that's it for leaving the house today, I think. The sun will be out in a bit making it too hot and glare-y. Plenty of entertainment here plus more imodium if I need it.

I had a nice walk this morning and already I can tell a difference. It takes so little but I hate it so much. But, this morning, my back felt way better and my breathing was easier as I walked and I could have walked farther but I promised myself I could quit after I rounded the block.

I inspected the progress of tearing down the viaduct. They are coming right along. There are still bits up over intersections and a section that is about 1 foot from the plate glass windows of a building but... otherwise, the thing is rubble.

I came home and stripped the bed and redid it and then did a load of laundry. I was washing up the few dishes in the sink when I remembered I had onions and celery that were aging out and grapes and hard boiled eggs that needed to be used. So I took some cooked chicken out of the freezer and thawed it and made a very excellent chicken salad.

Since there are no windows in most of my condo, the back recesses get dark. I keep low level IKEA lamps going in dark corners. The one in the bedroom was dark this morning. So I went to get a fresh bulb. Didn't fix it. Hmmm. Took the bulb out of another one and tried it. Didn't fix it. Hmmmm. Oh, wait, someone... no names will be mentioned.... knocked the plug out of the wall! Geesh.

And there are toys all over this living room. I think after I finish this entry, it's going to be pick up time.

I also think maybe the litter box in the bathroom might not have been a great idea. I don't like how it looks and they use it a lot. Too late now, I guess.

The kittens were a great help in folding laundry.

Baseball is back tonight. Yeah!

Tomorrow, I'll swim and then I think I'll make a run to the dollar store for more peach pie and to the grocery for more ice cream and kitten treats and then stop by Amazon on the way home to return an item.

carriea31 just asked me if I'd been in other earthquakes. So I thought I'd do a round up.

My first earthquake was in South Carolina. My Mom was over and we happened to be sitting on the living room floor playing cards. The earthquake was tiny but since we were on the floor we really felt it. That was in the 70's.

It was my last one until 1989. I moved to California. We had little ones here and there. You could hardly feel them. Then I had just gotten home on October 17. The World Series game was getting ready to start and I had my panty hose half off and was on the way upstairs to change into my baseball watching clothes when the Loma Prieta earthquake hit.

It was a BFD at home and at work for many weeks. (I was living in Morgan Hill, CA and my job, at the time, was head of communications (internal and external) for the IBM lab at Santa Teresa.) The damage to my house was not horrible but it sure fucked up a bunch of stuff all over everywhere. And work was a mess. I did a buttload of communicatin' 24/7 for a while.

One of the best earthquake stories from that one happened at my boss's house. They had this tea cart on wheels in the living room and on the cart was a crystal decanter of scotch. After the quake, they found the stopper across the room and the bottle upside down on the cart. It was standing on its skinny neck with the scotch still inside of it. It was amazing. He didn't touch it for a long time because it was such a showpiece and he couldn't figure out how to get it upright without spilling the scotch.

We had aftershocks for days and weeks. I was dating a guy at the time who felt earthquakes before anyone else. He'd be standing in the kitchen and say Earthquake!! I'd yell 'What??' and just as he repeated Earthquake! I felt it. This happened over and over again. it was creepy.

Then I moved to Seattle. In 2001, we had Mardis Gras riots in the next block. That night, a guy was killed and lots of plate glass windows were broken in the neighborhood. At 11 am the next day, we got hit with whopper. Walking around my neighborhood - one of the hardest hit - it was hard to tell what was riot damage and what was earthquake.

I put up a web page with pix so my Mom and her friends in Charleston, SC could see. It's still up looking very much like a 20 year old webpage!

The best story out of that one was this woman I worked with at the time. She was an annoying little airhead/drama queen. The only damage at her house was that the pink potpouri in a basket on the back of her toilet fell to the floor and the quake shook water out of the toilet onto that same floor. It stained the tile pink. Every day - every single fucking day... we had to hear about her FEMA application (to replace the stained tile) and how unfair the federal government was. The company went under shortly after her application was rejected.

I think we had one very small earthquake about 3 or 4 years later. And then last night's.