They have been here now for a week.

This morning they are chasing each other and fighting over ... a kleenex!

And now, they are once again butting heads over the one food bowl even though the same food is in a bowl right next to the one they both have their heads in.Every minute it is something.

Last night, they both slept with me all night - lying against my legs.

The Smalls is often more interested in me. This morning he tried so hard to get up on the bathroom counter while I was brushing my teeth. He tried to follow me out the door. He wants to eat what I eat, drink what I drink. He's generally the first to hop up on my lap and strongly, deeply, in the bottom of his soul believes he belongs on my keyboard.

Biggie is more of a stand alone operation. He's the first to get up in the scratching post basket and stay there. He'll land on the table next to me and just sit there for a long time. Or sit across the room and watch. He has nearly zero interest in my food. He also is a disciple of the Church of the Kittens on the Keyboard.

They prefer to nap in a pile. They really like stretching out next out to me on the chair - side by side or hugging. 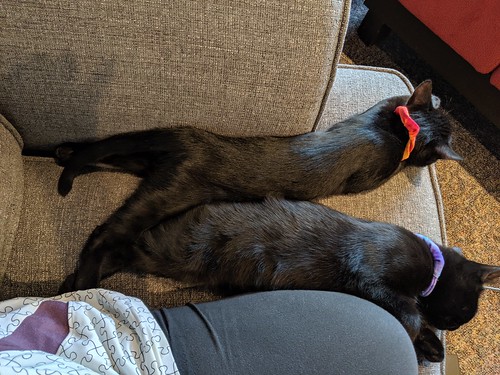 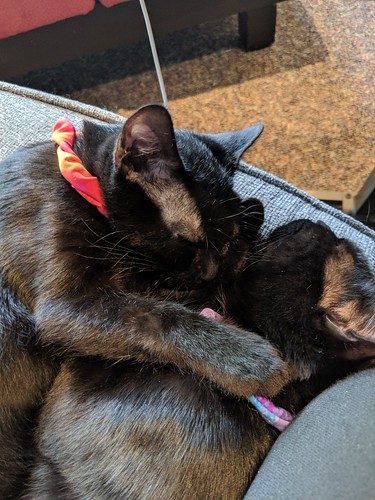 At a minimum, if sleeping for more than a few minutes, they need to be touching each other. If one leaves the room for any reason, the other one will follow. They have a hiding place in the closet and one under the bed. Neither will stay in either place without the other.

THE best toy is still the original stick with the ball and feather dangling from it. Last night Biggie dragged it by the feather from room to room with The Smalls prancing along behind for about an hour. The other toys are marginally amusing but only for minutes.

Wonder what the next week will bring.

But... clearly I need more/different cat food dishes and Daiso has the best/cheapest options. Daiso is a nice 5 block walk - 10 round trip. Not air conditioned but while it's warm today, the sun will be behind the clouds so not africa hot so... maybe that's a better bet.

Costco's not going anywhere. I can do it tomorrow or next week even. I need a supply of walking opportunities in my pocket or I'll go back to staying here in this chair every day.

I hate walking so much but I hate not being able to worse. I go through bouts of not getting out of this chair basically for days and then regretting it so much. I need to stumble over some way to magically get the kind of exercise that increases or maintains stamina in a way that I will actually do every day. It never will happen but maybe?

At least I'm committed for today and I think it will be Daiso. With a pop into Uwajimaya to pick up something for lunch and maybe some fruit for a snack. I still have teriyaki chicken left over from last night for dinner.

Ugh, the sun just came out. Hopefully it will go away again and soon.

Check it out! The new system is working at least so far. 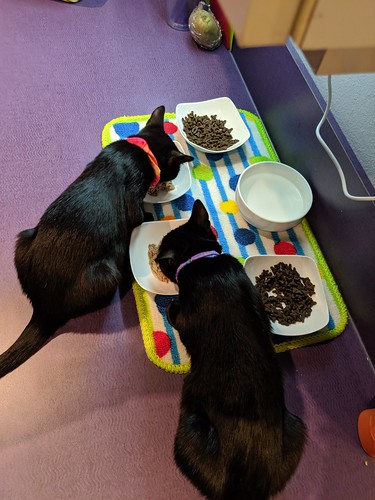 Meanwhile, the latest new toy is the eggplant I carelessly left on the kitchen counter. Those small Japanese eggplant weigh nothing and are easily batted around. Sigh.

I discovered I have several seasons of DCI Banks that I haven't seen yet and two seasons of British Baking that I didn't even know were out of the oven. And Monday brings a new series of London Kills. Nice.

I got a bunch of little stuff done today like register the kittens with the vet for next week's visit and get all their paper work organize.

The condo passed a new rule last night that meant I had to get more house insurance. You used to be able to make small changes on the website with no people involved but now you have to call. Instant Piss Me Off. However, it turned out to be a no telephone tree call with a very efficient agent. I was pretty impressed. Deed done and proof off to the building manager here in under 15 mins total.

Now I think I'll see how Banks is getting along with that pesky murder.
Collapse