I wrote this yesterday evening and forgot to hit 'post'!

Seriously, how good a sleep is this?? 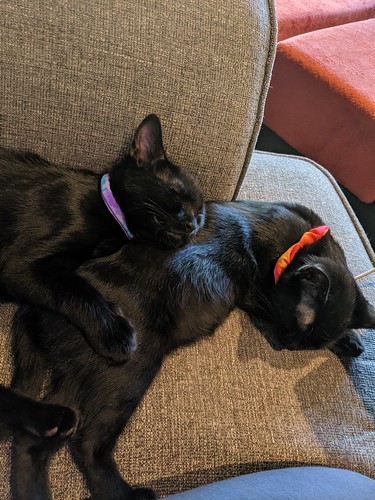 They got up a bit ago, and had a snack and now they are back in the same place in the chair but this time Biggie is at the front and The Smalls is at the back. I'm sure glad I got a chair and a half or else I would not have a place to sit.

I cheaped out with Showtime and HBO for sure and went with BritBox for $7. There isn't that much on it so I probably won't keep it after a month but it will get me through the All Star Break.

Now it is Tuesday...

I got up at 1 am and fed the kittens which at least kept them distracted enough for me to go back to sleep. When I woke up at 4:30 to go swimming they were both there and kind of pissed at being woken up. Kittens.

They were both awake and lively when I got back from my swim and the lively continues now 2 hours later. They were all over me for attention until about 15 minutes ago and now they are back to playing LA Police Chase up and down the hallway. It's so funny to me how they trade off. Biggie will be in pursuit as they leave the living room but when they come back, it's The Smalls who's on his tail. I love the attention but I also love when they entertain each other. They will crash and burn here in a bit, I suspect.

I'm afraid The Smalls is growing. I need to get a better base measurement for both of them - better than the TiVo remote. I'd like them to stay this size forever.

Yesterday the pool was packed. Today there were two of us. A week or so ago, Frank, the front desk guy was bemoaning the fact that we were losing Josh, our good pool guy. Well, whoever replaced 'our good pool guy' is, for my money, a GREAT pool guy. The water has never been as crystal clear as it has been these past two days. It's so clear that it's nearly distracting while I swim. I stopped by Frank on the way out today to tell him that New Guy is a keeper.

I think I'll wander over today to Mud Bay, the fancy pet supply place. I have a bunch of coupons that the shelter gave me. I have three cans of salmon cat food that I bought when I bought their other stuff and I want to trade them in. The kittens do not appear to be salmon fans. They will have been here a week tomorrow. Initially, I bought what I thought would be about 3 weeks worth of food. Turns out it was about a week and a half. This could dovetail into why The Smalls looks bigger.

Also I need to go back to Daiso (the Japanese dollar store) and stock up on these stick toys. The quality is good. Biggie has dragged this one all over the house. The feather is maybe 75% what it was and the rest of it has taken substantial hits but it is pretty high quality especially for the price. And is even favored over the laser. So I want to make sure we're not left wandless at any point.

I tried treats last night. The Sheba sticks that Zoey would have traded all four paws for were totally underwhelming. I pinched off a bit for each of them. The Smalls, who is pretty much an Eat Anything kinda guy finally did eat his. Biggie thought it was a toy. The fancy stuff from Mud Bay was way less impressive than the Sheba. It could be a challenge finding some incentives.

Ok, he just brought the stick up here to my chair and left it with me. I'm honored.

I never did get the sewing room cleaned up yesterday so that's today's chore. And figure out how to spend the $2.03 ecredit I have with Amazon. It expires in 9 days. Oh the pressure!

1. I think when you win a round of Bubble Burst 2 and while you were playing, you had to swipe a kitten of the keyboard more than once, you should get double points.

2. I went to Mud Bay for cat food and cat treats and totally forgot the fist full of coupons they game me at the shelter. Blegh.

3. I went to Daiso and got 3 more of their feathers on a stick. Three different ones, actually. BUT the headline here is that when I got back, both cats were asleep and so I managed to sneak them in the house and hide them away before being seen!

I got guaranteed kitty treats - turkey and cheese in little soft nuggets. The Smalls sniffed and moved on. Biggie just assumed it was a toy from the get go. Neither even tried to lick it. And the hunt goes on. I pulled out some of Zoey's cheapo kibble and Biggie ate a couple but not enthusiastically. The Smalls couldn't care less. Next I'm going to try a tiny bit of American cheese. I'd love to find something they'd knock over stuff to get.

When I hid the stick toy this morning, I tucked it under the seat cushion. After lunch today, Biggie came looking for it. It was on the floor in front of the chair but he didn't care, he went right for under the seat cushion to look. He was practically standing on it to look for it. Possibly not the sharpest knife in the drawer?

I think he was playing in the toilet. I don't think he fell in but just splashed himself. There were dibbles on the floor and on the toilet seat and on him. Water not pee.

The feather stick toy just got dumped for the tape measure. Temporarily. 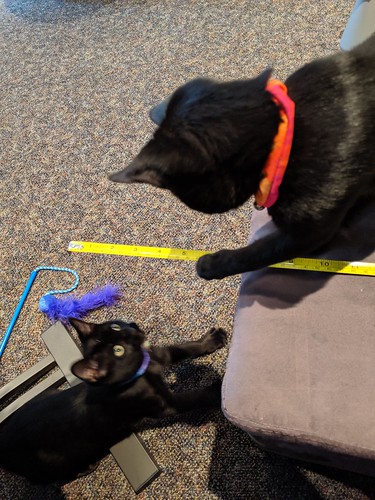 Squiggly and Squiggly Jr. are nearly impossible to measure, but best I could do is head to asshole, The Smalls is a smidge longer than 16" and Biggie is about 18"

They go to the vet next week - hopefully they will measure them then. For sure they will weigh them.

Of course, getting them out of the yarn bin might be an issue. They are pretty cozy in there. 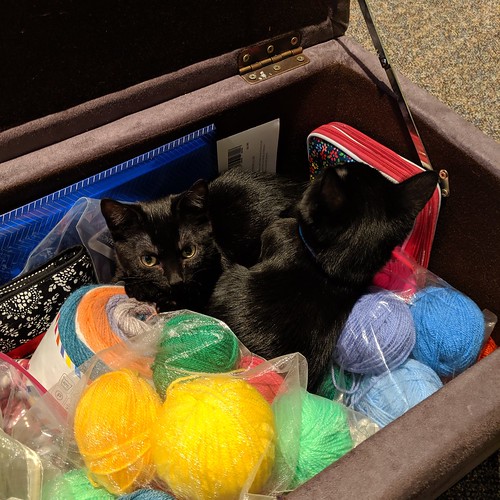