We're supposed to have a week of cool and rainy which is unusual and I want to take full advantage. It was cool enough last night to leave the door open but, no, I kept the a/c on and the door closed. No more. Today, already, The Smalls has scared the shit out of me by climbing out on the ledge and staying there and moving along it while watching the street. 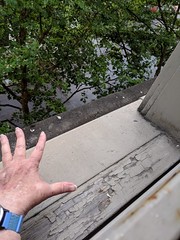 There's tons of room out there - see, it's wider than my flayed (woops splayed - thanks

zoefruitcake) hand - but, still, no barrier at all between that dark gray edge and 4 floors down to the street. He was out there for the longest time just making me crazy. Finally I decided to see if I could bribe him back in with a treat but as I got up to get one, he came back in.

Since then he's been out and in and they have been chasing each other from the terrace to the front door - back and forth with stops in between so I guess I'm going to let it go - at least for now. It is lovely to hear the sounds of the city in the morning again.

Last night they both did better. Biggie only tried to eat my nose once. I switched my very small blanket for a full size duvet cover without the duvet in it and it worked much better. They crawled all over me under the cover and above but in spurts and then slept. I did not get up for any midnight feedings.

Before bed last night, they decided not to fight over sitting next to me. They just piled on. 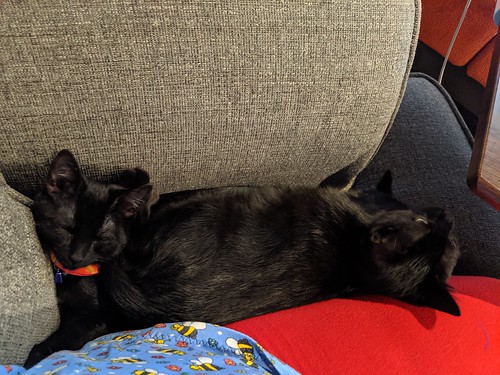 And then I turned on the auto laser toy and they chanced it for a while and then just decided to watch. You can really tell the difference between Biggie and The Smalls here. 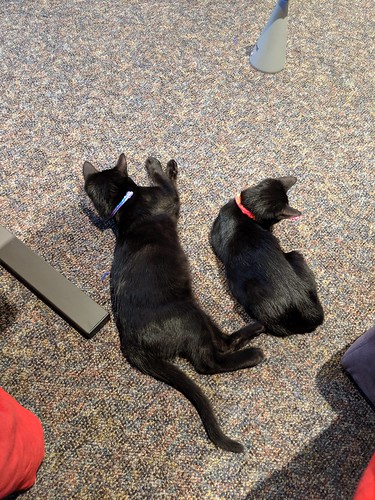 I got a lovely follow up note from the Humane Society yesterday asking how they were doing and also asking if I had any photos I could share. Well, yeah... a few. I have done no editing. But I did dump them all into one album. And the webcams are linked in my LJ Profile.

In non-kitten reporting... my swim was great. The pool was packed. I wonder why? My car air conditioning is working fine. I cancelled my appointment for tomorrow. Weird but I'll take it.

Nothing planned for today. No more baseball until Friday. I definitely need to clean up the sewing room and maybe pull out all the shit from that one deep drawer and organize/toss it. And sometime this week, I need to pull everything out of the fridge and the freezer and give it a good clean. Maybe even today!

OMG. The kittens just ran from a loud noise! With the door open, when the garbage trucks empty the dumpsters from the apartment building across the street, it makes a LOT of noise. Finally something they are afraid of something! The both high tailed it back to the interior of the condo, as far from the window as possible. And they didn't come right back. It's been 10 minutes and I haven't seen them. Hahaha. Now I'm getting worried about what they are doing back there...

I did it. I took every single thing out of my freezer and organized it and put it back in so now I know what's in there and where I can find it. Then I did the same with the fridge only there I also took out the shelves and cleaned them.

This time last year I did all of this and it was an all day job because I had not done it in years or maybe ever since the fridge came to live here. So once I got it done last year, I vowed to do it annually and even put it on my calendar which is exactly how it came to happen today. And, yes, cleaning out after only a year is way better and easier.

On the high of that victory, I also cleaned out the two cabinets I cannot get to easily. They each had become dumping grounds. I got out the stool and pulled everything out, put most in the Goodwill bin and put the rest back. One of the things I like best about retirement is the luxury of time to get things just the way you want them. I also enjoy the aftermath of same.

Meanwhile, Biggie and The Smalls have been playing non-fucking-stop at high speed with that damn stick/feather. I'm not sure where it is now - they were just in the front of the house, probably spreading the litter around. And came running back here. The stick is probably under something. It's turquoise. Won't be hard to find. I think they may be winding down for a nap now. Maybe.
They really are so hilarious. 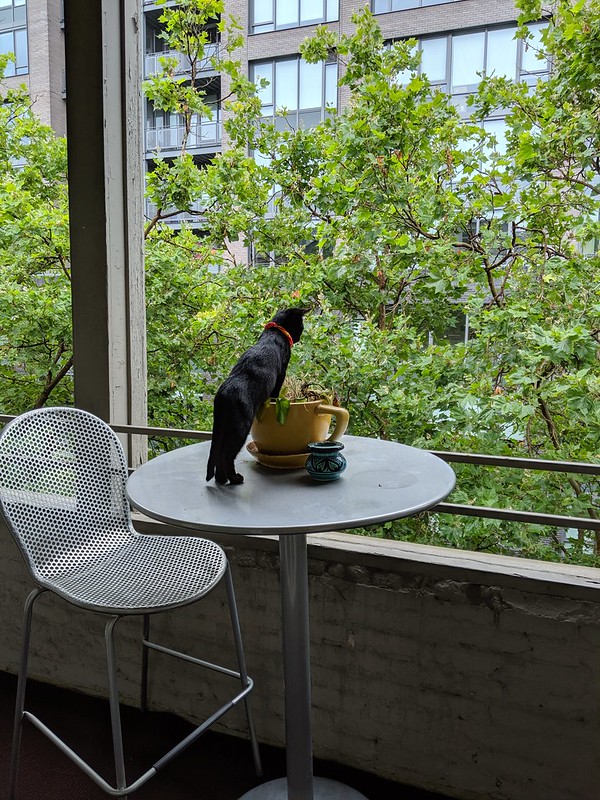