So... we have some challenges to work on.

The Smalls (and sometimes Biggie) feels the need to stand on, walk across, jump from this keyboard. I've seen more source code in the last 24 hours than I saw in all my years of web work. Apparently Ctl+U is his favorite landing spot.

This morning, while I was swimming, I worked on a potential fix. Gave it a try. Fail. I do have a plan B but it's a build so later.

Last night, I when I went to sleep, they were somewhere else - under the bed was my guess. But, they joined me shortly. One on either side. Very sweet. Until about 2 am when I got up to pee. That is apparently International Kittie Code for PLAY TIME!!!!!!! Omg. They would not leave me alone and they were biting me - my fingers, my arms, whatever they could find. The blanket I have on the bed is really just kind of a lap robe. That will be replaced today with a full on blanket that covers me entirely. And I will put a couple of toys nearby that I can grab for them to bite instead of me.

It also might be worth the effort to get up and dish them out some wet food. They could eat and then, hopefully, nap?

I have started the Litter Box Project. I need to move them from the temporary litter box in my bathroom to the real litter box in the sewing room. I sat it on a big bath towel yesterday and today I moved the towel and box out of the bathroom and into the bedroom on that towel. Tomorrow it will continue on its journey into the hallway and, hopefully, by Tuesday/Wednesday, we'll be in full compliance with the regular litter box.

They are, right now, playing POUNCE! I Got You!!! At top speed. They are just so busy.

On the way home from the pool, I turned on the car A/C just to test and it blasted cold air!! Like it should! Weird. I think maybe when it gets hot this afternoon, I'll take it out and try again. I'd love not to have to mess with, much less pay for a fix for broken A/C. I'm fine with a mysterious healing. My appointment isn't til Tuesday so I have some time to test and cancel if it I don't need it.

Plans for today include kitten watching and watching of kittens. Maybe some TV. Probably some baseball and then being entertained by kittens.

Biggie has the blue collar and The Smalls is the other one. Breakfast - important meal fo the day. 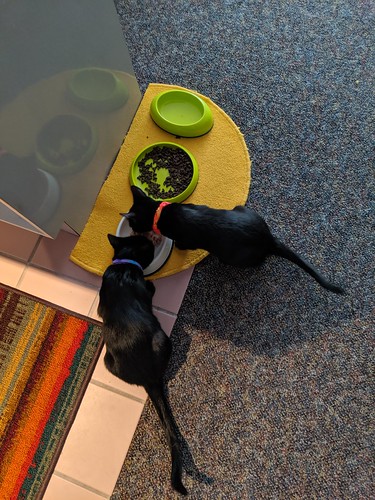 The Smalls is getting more and more attached to me. Biggie is not unfriendly but he has his own agenda which involves the scratching post perch. I try to hold him when the opportunity arises. I want him to get used to being held and carried but it's not going to be easy, I don't think.

I wore them out with lasers today a couple of times. I've come to appreciate kitty naps. As soon as I go to scoop out the litter box, I have the full attention of both of them. They watch me closely and then hop right in even if they don't have to go. Silly boys.

I am really sleepy. I hope we don't battle again tonight.

During kitty naps, I did finish watching Designated Survivor. So good. Netflix has not announced Season 4 but the internet tv critic peops seem to think it has a good chance. I hope so. I'm thinking about buying a month of Showtime. I want to see Billions and City on a Hill and Molly's Game. Maybe.

The Smalls in a now favorite spot next to my leg on the chair. 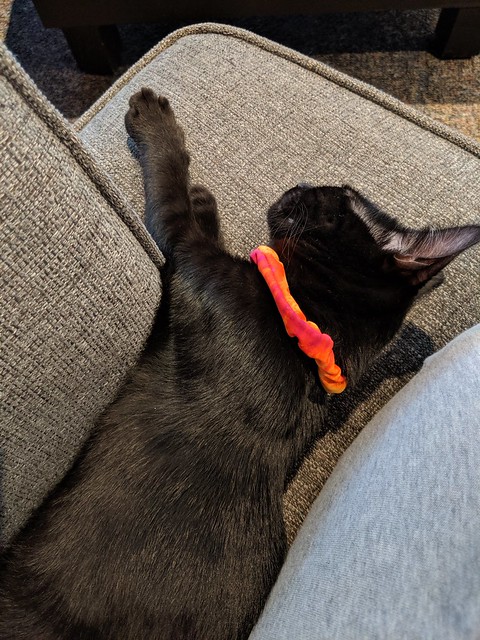 Biggie on the back of the chair. 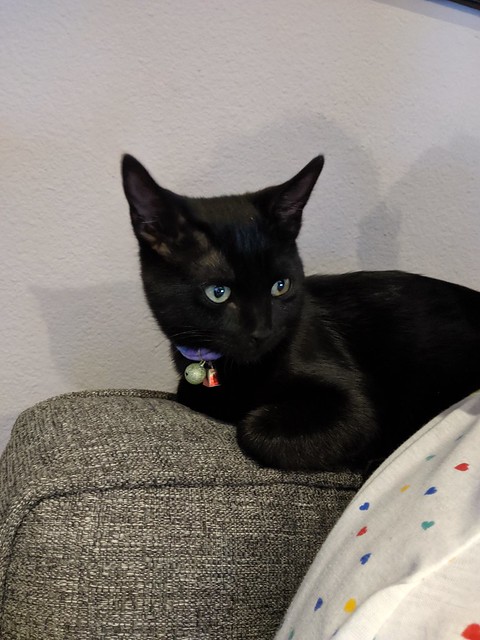 No idea who's deed this was. Nice work. Maybe a team effort. 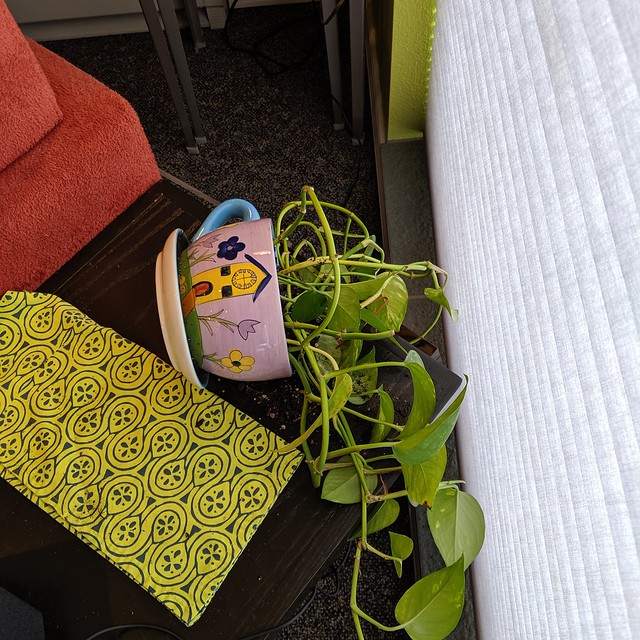