As a kid, I waved the flag like everybody else. My paternal grandfather was a particular flag waver and country lover. He had been born in Germany and was a naturalized U.S. citizen often extolling the virtues of "this great country".

Then as I left my teen years, "this great country" started requiring boys to go to Viet Nam and fight a ridiculous war we had business even being in. It was not fair that I was not required to do this. It was not fair that they were required to do this. And that went on for years. By the time it was over, the combination of red, white and blue made me sad and furious.

And, frankly, I never really felt patriotic again. I especially eschew the my-country-right-or-wrong patriotism born of 9/11. But these days it I find the United States mostly embarrassing. I cannot identify with Trump's America. I cannot identify with the 1%ers or the all-corporations-are-evil bunch. I am not proud to be an American.

I do not feel freerer than those who live in other a fair number of other countries. I honestly have no desire to live in another country. Heck, I'm not interested in living in another city.

I'm just glad the 4th of July is behind over.

I think I'm going start calling them Biggie and The Smalls. And they continuing their run here of hilarity. I have this motion laser. If you move it or knock it a little it throws out a beam for a finite amount of time - I think it's 30 seconds. And then it stops. It's sitting on this table with the laptop. Biggie keeps hopping up here and starting it off and then chasing it until it stops.

I swear it feels like he's scratching his head when it stops. He's so confused. It's so funny.

This is The Smalls 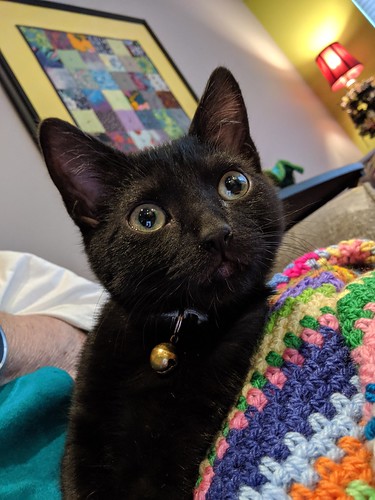 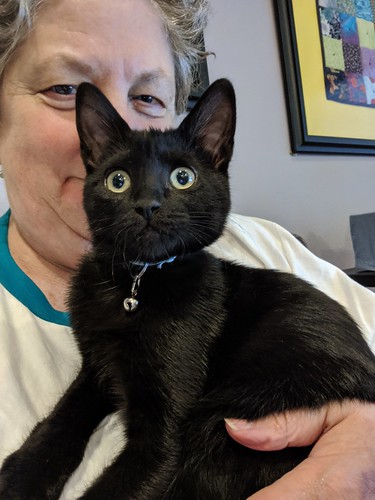 Today they are playing King Of The Mountain. Biggie's perched on top and The Smalls wants in on the action. He's trying so hard.

He's given up and now all over me and this keyboard while his brother is watching The Tree That I hate.

Not at all surprising, there was nearly no one at the gym this morning. Only a handful of us regulars. Front Desk Frank told me yesterday it was packed the whole time it was open.

After my swim, I went to the 24 hour Safeway. Frank is coming over tonight to meet the kittens and I thought I'd pick up some watermelon and stuff to make potato salad. Done and done.

It is cool enough this morning to turn off the a/c and have the door open but I'm not sure these two are ready for the terrace so I'm leaving the door closed for now. Maybe when Frank's here tonight and there are two of us, we'll give it a maiden run. I think it's going to be too hot to have it open for a couple of months so there's really no hurry.

This entry has taken me forever to write because I keep getting interrupted!

Guess I'll quit trying. I want to go make them collars this morning anyway. Sewing with them is going to be extra fun!

Actually victory for me. I successfully moved the food and water out of the bathroom. My bathroom floor real estate is not huge and it was getting really crowded in there. The Smalls can't get to the kitchen counter yet. He tries and it won't be long but for now, the food and water is on the floor. In the kitchen.

Whew. Then I vacuumed with the stick and the hand held and got a good 99% of the litter and the red tinsel from that toy out of there. Another Whew.

Then I went into the sewing room to make the collars. Guess who followed me??? They inspected every single bit of the room... very carefully. 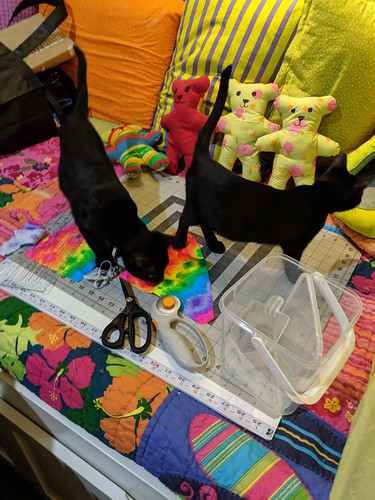 And while I was working, all on their own, they found the litter box cupboard and used it!!! The box (and spare litter and a container to scoop used litter into) are all in what looks like a blanket chest. It has an entryway on the side. Very nice and tidy. And now they know where it is. So I swapped the put the big litter box they have been using into the cupboard and put the smaller one into the bathroom. I'll give them a few more days and hopefully, they'll forget about the one in the bathroom. And then I can reclaim the whole room.

Their collars now have two bells. I think Biggie's may be too big yet. He's gotten his teeth caught on the bell ring once. If it happens again, I'll take it down a notch but I'd like to give them room to grow. 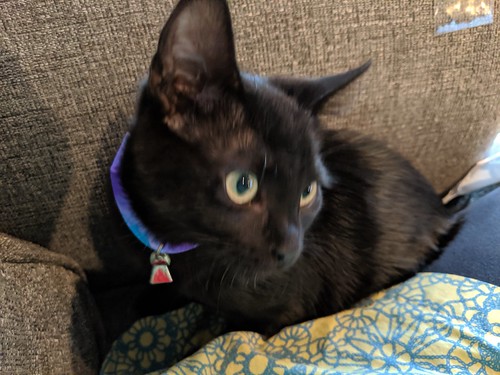 And The Smalls got neon orange/pink. 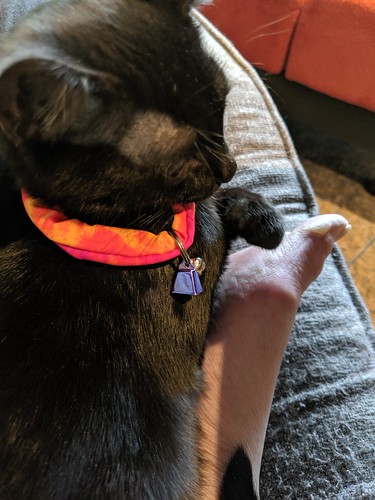 So far only Biggie had been on the top of the cat tree. But while he had his back turned a bit ago, The Smalls made a beeline. Biggie saw that action and tried to remedy. FAIL.

Now they've taken off again for the bedroom or where-ever. Another private meeting, I guess.

Meanwhile, I made two kinds of pimento cheese - one plain and one with olives and a kick. And I made potato salad and OMG that potato salad is FiNE. Had some for lunch.

Now I need to clean up the kitchen. I don't know what time Frank's coming over. I don't even know if he's working today or not. Doesn't matter I'm ready for whatever and have plenty to keep me off the streets until then. Plus, kitten entertainment. 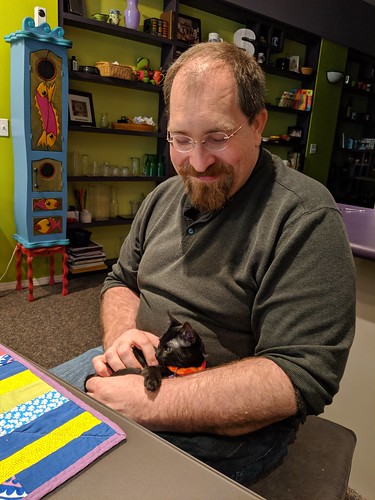 The Smalls just melted right into Frank's lap. At one point he had his eyes closed - a little lap nap.

Frank was expecting them to be shy or scared. They really were neither. They really aren't afraid of much. Clipping of nails pisses them off but I don't think they are afraid of it. Turns out neither is afraid of the vacuum. I had it in the bathroom earlier today and they just watched. They did try to attack it but they weren't afraid of it. And they were fascinated by the hand held one.

They are just calm, cool dudes.

They did finally figure out how to share the perch. 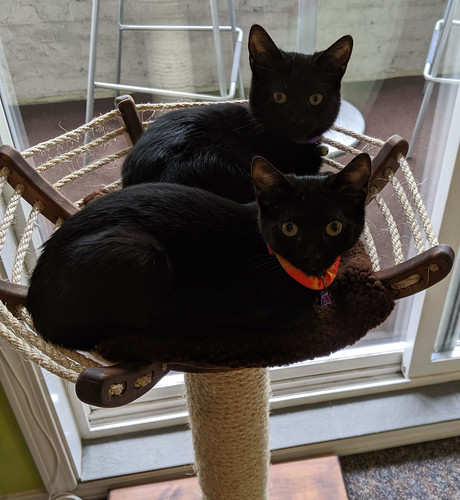 Perspective... That's The Smalls in front and Biggie in back.

Oh and while Frank was here, The Smalls finally got up on the kitchen counter. We did introduce them to the outside. They really weren't that impressed. We also let them wander around. I think by September when it's time to open the door again, they'll be fine.

I got really lucky with these kitties. They are the best.
Collapse