On my face. harharharhar That lady at the shelter would be appalled that I just ignored her instructions about keeping them confined for 2+ weeks. I barely made it for 2+ hours.

The kittens slept on my bed all night. A lot of it on my face. Some of it on my neck. Some of it in that spot made when I fetal up on my side. At one point, one of them landed on the pillow and draped himself over my head which was oddly very soothing. They jumped and trampled me at various times and it was fine. I managed to get a lot of good sleep anyway. I love having them there.

They are good eaters. They are not going to be tiny for long at this rate. The spreading of litter around the bathroom remains their top skill. I think, today, I'm going to get out the big litter box with the high sides and move the current one to the litter box cupboard. I think they will find it and learn to use the cupboard on their own but I'm now wondering if I'll ever get all the litter off the bathroom floor.

I have yet to see them hop onto the kitchen counter but I put a small bowl of food up there for them anyway. I have enough counter space and it's so much nicer for me than serving/picking up/cleaning up on the floor. I hope they pick up the habit. Edit: Kitchen counter/food discovered.

I could swim today. The pool opens at 8 but nah. I think I'll stay here with the kitties. I am going to the Mariner game at 11 - buffet lunch before - so they will be on their own all afternoon. This evening will be interesting.

I got out the crocheting last night and there was a little interest but not much. I also didn't get much done since kitten cuddling really requires two hands.

I did get most of the claws off the front paws clipped. No one was thrilled by this. I like the result but the kittens thought the whole idea stunk to high heaven. I learned long ago that making the extra effort from the time they are tiny, makes claw clipping sooooo easy for the rest of their lives. I tell them this but I'm not convinced they are convinced. But we're close to good for now. Mars has one more I need to get - he pointed this out to me last night landing on my boobs.

Ok, I just did the litter box swap. The one they have in there now is large and has tall sides. Of course they hopped in immediately and then draped themselves over the tall sides. Seriously, boys and bathrooms!

I vacuumed a bunch of the litter off the tile while they watched. I left the vacuum standing in the bedroom and now they are attacking it. I need to get the hand held to the corners where there are still drifts of litter piled up.

Now they are back into explore mode... no corner left examined oh and we found one of the scratching posts and figured out what to do. 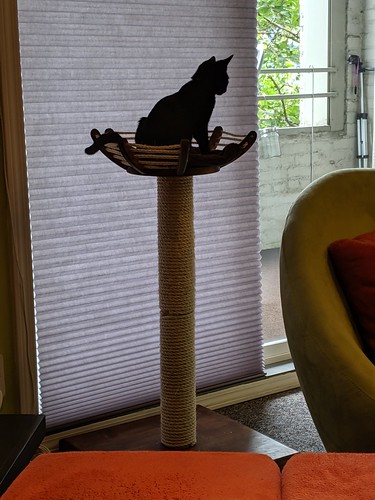 To Be Continued Ad Nauseam

I went to the game and my whackadoodle shirt I made to withstand the sun/heat worked out pretty well and got a whole lotta complements. It was not horribly hot but it was mostly uncomfortable. It didn't help that we lost. Again. To a team that is not as good as we are (hard to believe there is any team not as good as we are). I did miss the kittens.

I did leave them confined to the bathroom. The basket of toys I left in there was untouched. But, the food was pretty much gone. They didn't rush out to play with me and I tried not to be hurt. After a bit, I convinced them to come out of the bedroom (thank you, laser). And they played here in the living room for a while and now they have gone back to the bedroom. Executive meeting?

I think tonight will be crochet and TV. We may get a chance to see if these kittens are yarn kittens. Stay tuned.

Yesterday, they were happy to claw the arms of my chair. Oddly, I was not that happy about it. So I put a couple of rows of packing tape on the arms and did the aforementioned clipping and bingo bango, problem solved! Each of them gave it a go and discovered the problem and have not even tried again.

They travel together. They go off to the bedroom - under the bed, I think. And stay and then come out, together. They aren't in lock step. Mars is right here in my lap and Joy is off down the hall. If I turn on the laser, they will both chase that dot but otherwise, they do their own thing. Then, in a bit, together, they will go back to the bedroom. It's like they have a pact.
Collapse