To get to the pool at the gym, you go through the locker rooms. This morning I came out of the women's locker room just after two regulars - Matt and Michael - came out of the mens. They were in the middle of discussing which one would take which of the three lanes and I heard 'which side of Susan do you want?' CRACKED ME UP! I do always take the middle lane mainly because I always get their first but, as I told them, just consider me the peanut butter and jelly in your sandwich.

Today is house cleaner day. And, so, get out of the house day. I have a bunch of donations all ready to take to Goodwill and I need to make a grocery stop but Grocery Outlet (the one closest to here) will work fine. I need grated cheese and that's something they always have an abundance of. There's a chance I might go to the Mariner game with my friend, Frank, tonight. Some guy at his work is selling his very good seats. It might not happen but if it does, I need to make some pimento cheese. Frank has never had pimento cheese and he's very interested. Our get togethers are always so last minute that I never have time to make it before I see him. IF we get together for baseball tonight, I will have it ready for him after the game.

My car's a/c is out of cold ... again. This happened last year and the fix was expensive. He put some kind of dye in the juice so that if there was a leak he could find it. I'm guessing, it's now been too long to make that an option so we start from $cratch again. Sigh. At least I could pop him an email and set up a convenient time with minimal effort. Next Tuesday - 7am.

I ordered some yarn from a Danish yarn company the other day. The price was good and the offering intriguing. And the website seemed way amenable to sending stuff the U.S. So I picked an offering to test. I don't have the yarn yet, but so far the entire experience has been top drawer. Their website is clear and easy to understand and find what I want but mostly it's their communications. Their no nonsense emails and tracking is really nice and impressive. I can't wait to see the yarn!

I got a response to my email to the Humane Society and it basically said Come meet with adoption counselor.

So I got into my car and drove to their place - about 20 minutes east of here.

I told them what I wanted and they said I could see and pet and play with the two kittens but because of their FeLV status, I could not touch any other cat after that so if I wanted to look at other cats I needed to do that first. I said nope, I didn't want to.

These two were the darlings of the FeLV ward. There were lots of staff and volunteers and they were all hovering while I 'met' Mars Bar and Almond Joy (who, I'm pretty sure will hereafter be known as Mars and Joy.) It was easy to see why they were fan favorites. They were adorable and playful and fun. After a while I couldn't come up with a good reason why not so I said I wanted them. I nearly got a round of applause. I absolutely got lots of hugs. 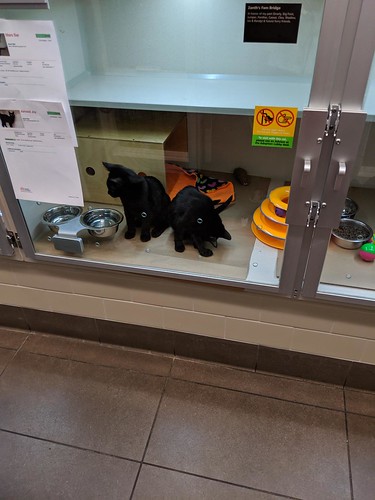 The processing took forever but they were very apologetic about the wait and I didn't really care. They have an onsite pet food and supply store! So I was able to get kitten food - the same stuff they have been eating. And they gave me some free stuff and coupons. Very nice.

Finally, I paid up $100 each. And we were on our way home. I have reams of paperwork for each of them all about the FeLV. In a couple of weeks they are due for another shot and a vaccine so I'll take them to my vet then and get the skinny on what needs to happen for them.

They are now in the bathroom with food and water and a litter box. I just grabbed the first thing I could find with low walls to put litter in. They took about 10 minutes to let me know the vessel I had chosen was incorrect. 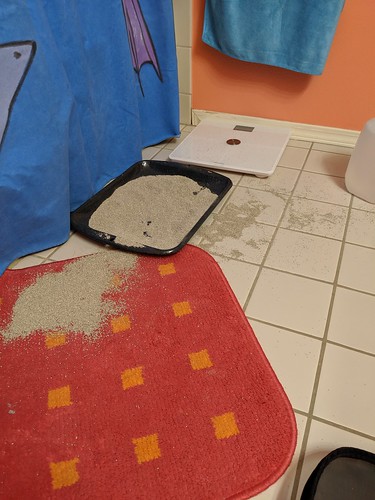 So, I found one with higher walls allowing more litter. I filled it up and took it in. 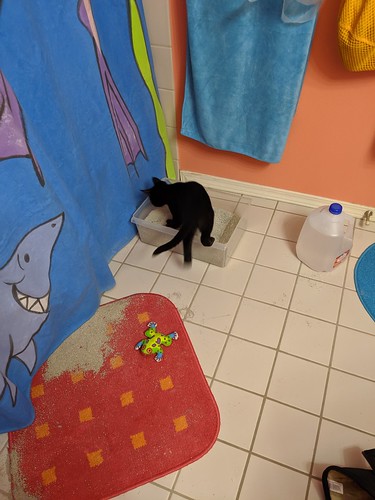 Mars jumped in immediately, pawed and it and peed. Then Joy one jumped right in with him, pawed at it and peed. The then Mars pooped then Joy pooped. This was all accomplished within 5 minutes of my setting it down. They are big on positive reinforcement for training their human. Then they proceeded to play in the litter - boys and bathrooms. Sigh.

Cut to later. I got a lot of the litter cleaned up and kept going in to check on them. They were very busy. Climbing the shower curtain, one of them managed to get one of my neoprene swim gloves. GREAT TOY!!!

And lots of jumping and running and SURPRISE!!! IT'S ME!!! They are a riot together.

Then I went in to check again and apparently they'd been plotting their escape. They had not shown any interest in what was beyond the door but this time, they just went for it.

The Humane Society lady told me to keep them in the bathroom for a week and then to confine them to another room for another week and then let them out for supervised visits. I knew that wasn't going to fly. It never has with any other cat I've ever had kitten or gown. Once they want out, in my house, they get out. If they act scared or shy, they go back, if not, they can go where they want. I leave the light on and the food and litter in there so they can go back any time.

BUT once they are out they are belled. for now, it's just a bell on some elastic that is tied on. Easy to get out of. They aren't happy about the bell but can't figure out how to get out of it so ... we're good so far.

I can sit here in the living room and hear them playing NASCAR in the hallway. I can't find my good laser pointer but I did find one that works pretty well. They are into it. Big time. So that's what we'll use to get their attention. Amazon is bringing me better ones on Friday.

They have now moved from NASCAR in the hallway to I'll GET YOU, NO! I'll GET YOU in the living room. They are energizer bunnies! Sadly I do not have

solteronita's kitten photo skills plus and stopping for a close up does not, so far, appear to be in their skill set. However, landing with claws out sure is OUCH!! Claw clipping is in the very near future. 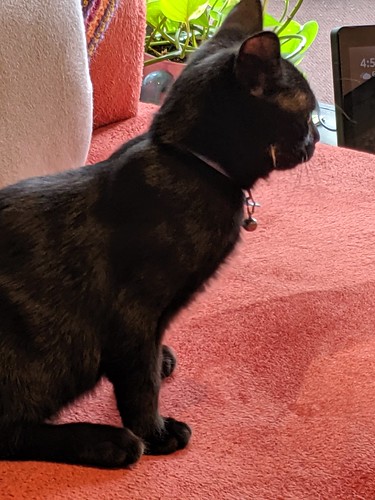 Ok, here's Mars curled up on top of my feet under the computer table. Joy is going to come along in a minute and say something and he'll bound down probably grabbing my feet with her claws as she goes. Oh there he is now! Now they are both up here... Damn they are busy! Kittens. amirite? 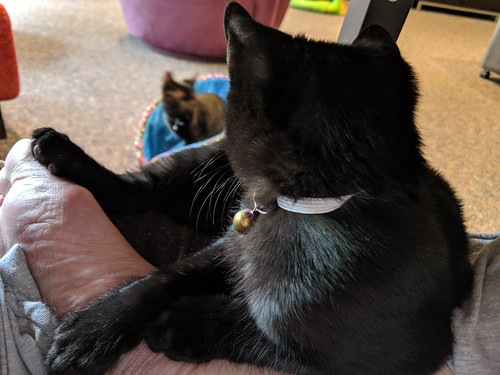 I got up to check on them a bit ago and they were both sprawled out on my bed!

At least my fitness tracker has quit bitching at me to MOVE!

In other amazing new, my housecleaner finally put the garbage can liner in correctly!! I've had the thing now for 6 months and showed her how to do it more than once and every time I have to redo what she's done. Until today!! Bless her heart, when she got here, today I told her I had two things to tell her. One was that Zoey had died. Interestingly her reaction was not surprised. "Last time I wondered if she was ailing, she look so thin." Then I said "and the second thing is" and she interrupted me and said "you want to cancel me." NO! I said. NO and she looked like I'd just told her she didn't have cancer after all. I don't know why she thought I was going to fire her she never has said that before. But I assured her that the people who come in after I die will have that duty. What I told her was that my neighbor across the hall wants to hire her!

Yep. We've gone from subtle little occasional bumps in the night to major crashes. Somebody and his brother have found the closets which have curtains for doors so are basically kitten invitations.

Also, WATCH WHERE YOU STEP!! Apparently, the prime real estate for kittens is under foot.

And man can these dudes eat. Of course, I did get the premium stuff but geesh it looks and smells disgusting and they think it's mana from heaven. Hope they will be able to live with Friskies someday.
Collapse