Zoey is napping right here next to my leg on this chair. Hottest day of the year and she has to snuggle. It's not going to last long, I'm nearly out of coffee and will be getting up soon.

But I really am hot day ready. The air conditioner is conditioning beautifully. I have the blinds drawn to keep out any heat building sun. I have no where I have to go. So the plan is to say cool right here. This particular heat spell looks like it might be mercifully short.

Oh! look what just popped up on Twitter. A great photo of a sea gull that includes my condo! Look all the way to the back on the right. Now count up four floors from the street. Just to the right of the lamp post is a unit that is half obscured by a tree. That's ME!!! And that's The Tree That I Hate! 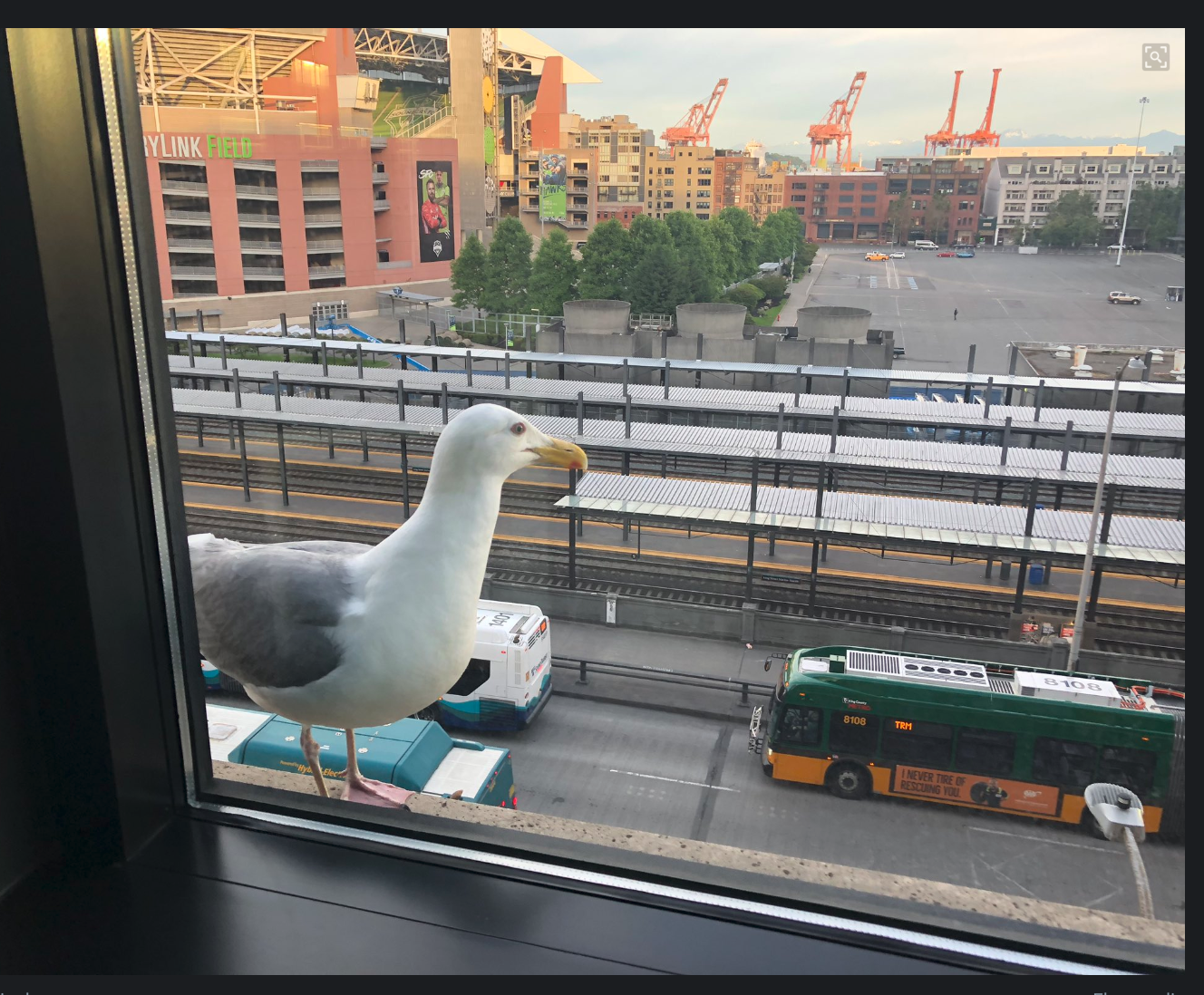 The Echo Auto performed fine this morning. It's not quite a zippy as the Google Assistant Roav but the content is way better. Testing continues.

So for two weeks now, the pool has been mostly empty. Just me. My friend, Matt, finally came back this morning and while we were waiting for the gym to open, I told him that all the regulars had abandoned me and it had been lonely. So, then, of course, this morning it was packed! We had quite the chuckle over "Matt's support team".

So. One November years and years ago, I got a package one day in the mail from my mother. It was a smoke detector (this was when they were just on the market and nobody had them yet). It came with a note in her handwriting that said "love, me". WTF??? So as soon as the long distance rates went down that day (yes, that was a thing - old people will remember), I called her and basically asked WTF? She laughed and explained that she had gotten smoke detectors for me and my brother and my sister for Christmas and then, when she was going to sleep that night had the horrible thought ... what if one of us had a fire and burned up between now and Christmas!! So she wrapped 'em up and sent them out the next day.

I thought of that this morning when I decided to take those stupid Tile fobs off my key chain. I bought a package of the trackers one day when they were really cheap. I have two key chains (one car/one no car) and have one on each. Plus one in my purse and one in my swim bag. Only one time in the six months or so that I've had them, did I need them to locate something and it could not. But, I don't take them off because I know as soon as I do, I'll lose the keys, my purse, something. But, fuck that. I hate extra crap on my keys. And I keep hitting it and making it squawk. And I'm done. Sorry, Mom. Hope the house doesn't burn down.

When I was last at my regular doctor, he told me to quit taking the aspirin he'd had me take every day for years. I did. And, it dawned on me this week what a difference it has made. Yes, my nose bled but the first time, only for a tiny little bit and while the second time was worse, it could have been way worse and, previous nose bleeds lasted way longer. And the senile purura ... These are the blood bruises you see on old people's hands and arms. They are gross looking. I used to get them constantly. It was horrible. Then the lung doctor took me off the steroid inhaler and they really cleared up. But, still, all I have to do is get the back of my hand near a sharp edge and an ugly red purple bruise grows all over the skin and stays for two weeks or more. Except, yesterday I hit one hand and then the other and instantly saw signs of the bruising starting but it never got bad at all. There is, today, a very small dime sized area on both hands that is a little darker in color than the rest of my hand. WAY WAY WAY better than those awful bruises. Fuck that aspirin shit. Of course, now I'll probably get a blood clot that will kill me but at least I won't look like I was beaten with a mallet when they find my body!!

Ramble ramble. Outside of staying in the house near the air conditioner, I don't have much planned for today. I think I'll go back and tidy up the sewing room. And maybe get a new project started. Zoey's new collar is good and I found a bigger bell that I can actually hear. Maybe no more sneaking up on me! 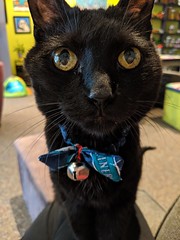 It's elastic and not as loose as the other one so maybe it will take longer to get groddy. It takes about 15 minutes to make one from scratch so no big deal either way.

This week it was announced that Amazon Restaurants is ending. This is disappointing. It is the only food delivery service I use. I really really like it. I don't order food often - maybe once a month - but I always used Amazon when I did. I can't bring myself to use Uber anything. They seem to be the deliverer of choice around here for restaurants so I guess I'll be ordering in even less. Bummer.

I need carpet cleaning. I have zero interest in the kind where you move all your furniture out of the room and then don't walk on it for a day but I sure could use a giants sucking/scrubbing machine in the major pathways. Our last building manager had the HOA buy a carpet cleaner for the hallways. Our current building manager can't be bothered so hires a service. I just sent a note to the president asking if we still have the machine and may I please borrow it. I'm sure this plan will not work but figure it's worth a shot.

When it fails I may just abandon the project and leave it for those who handle the rest of all this after I die.

I did get the sewing room cleaned up and organized better than it has been in a while. Now I need to get in there and make something - aka mess it up again.

But not today. The sewing room is farthest from the air conditioner so ... not today.

The baseball game is at 5. I've got a new book going on Kindle - The Gown by Jennifer Robson. It's a library book, so short life. I think I'll give it some attention.
Collapse