The only thing on my list of things to do today is making breakfast burritos. This appears as if it will be the very last cool day so I feel like I should take advantage of it. I'm considering getting on the trolley and riding up to Capital Hill for a bit of a walk around maybe.

The hot air that starts this week is only expected to last a couple of days but it seems that this time of year, once it gets hot, it stays hot til fall. Not hot like some places but hotter than I like for sure. I'm not an outdoors person at all, not close. But, once it gets hot, I feel like wild horses are to get me outside at all.

Every year I try so hard not to hate the heat and not to bitch about it and every year I fail miserably. I need to come up with another tact.

I finally cleared out all but a couple things on my TiVo. And there's little in the Coming Soon list so now I'll be essentially a cord cutter for the summer but one who also gets to pay the cable bill. Nice. Baseball is an expensive habit, tv-wise. And, speaking of which, there isn't even a game today.

Guess I'll get on those burritos now and then figure out the rest of the day.

I was listening to a podcast this morning and this guy was talking about finally getting together with his wife after both of them had been working long hours and going to a great Mexican place they had been to before and loved (in LA). They sat down and ordered and were waiting for their meal when all of a sudden, over the income, they announce Starting right now... It's Children Karaoke Night!!!!

They said they were trapped because they had ordered. Me? Order/schmorder my ass would have been out that door so fast it's memory would be gone, too. Holy crap. I cannot imagine anything worse.

I got my breakfast burritos made 4 in the fridge and 4 in the freezer. The last package of tortillas I got turned out to be some kind of whacko carb friendly ones which just means smaller. But, I'm good a rolling so it was just annoying, not a catastrophe. Note to self, CHECK and stay away from the ones with the blue logo.

Then I cleaned up the kitchen and put on my shoes and went up to the trolley. It was a lovely ride and then a lovely walk around. It was hot so I mainly walked around inside a couple of shops. Then I walked into THE best poke place in Seattle and got lunch. I have two closer poke options.

Sodo Poke is the newest and easiest to get to. It is bright and friendly. But even as a build your own, it's just not that great. It's really more emergency poke.

Uwajimaya has premade poke which is really excellent and the cheapest of the three.

But, FOB Poke is the best. Hands down the very very very best. It is build your own but they have better ingredients and a delicious sauce and they mix it perfectly. And they deliver.

FOB is where I got lunch today. I should have eaten half for lunch and saved half for dinner - their portions are just huge. But I ate and ate and ate. It's 3:30 and probably I don't even need dinner.

Last week when the Nurse Practioner blamed my lung issues on allergies I knew she was wrong. I followed her instructions anyway (Flonase) but poo pooing the theory all the way. So, of course, for the past two days I've been sneezing up a storm. I still think she's wrong and the Flonase is causing the sneezing. Address all mail to me in Denial.

I was asked today by the University of Washington to be a candidate for a Twitter study. They pay me $30 for an hour and do it at a neutral place like a coffee shop that I can chose. Friday morning. Should be fun.

Zoey, the cat, was napping outside behind the curtain that hides the storage unit. A gust of wind just sent that curtain flapping in her face. If looks could kill, that curtain would be a disintegrated mess.

A year after I first requested an invite, Amazon finally invited me to spend $25 on Echo Auto. I have they Google device that costs twice that and does some things brilliantly and some things incredibly poorly. I decided to go ahead and buy the Amazon one and try it out. If I don't love it to bits, it's going right back. It arrives tomorrow.

Now Zoey's sitting on this keyboard. Ok, I've convinced her that side view is better. Her Mariners bowtie collar is getting pretty groddy. I think it's time to make her a new one. 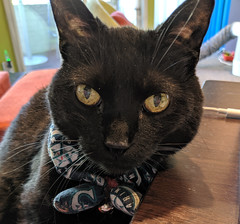