Today is swim suit making day. I'm down to 3 suits and one has only a few swims left. I have the next one cut out and ready. Even the elastic is cut to measure and ready to go so it probably won't take me more than an hour.

And that's really the only thing on my plate today. I'm feeling kind of poke-ish so I may go hunt some of that down for lunch.

I don't have anything that needs refilling any time soon anyway so I can now Scarlett O'Hara this whole festuche.

I just went into the bedroom to get dressed. I'm working through my stack of Summer shirts. Do I still love this one? Yes or Goodwill. Pockets? No but worth trying to add or Goodwill. I hit on one that I remembered as a disaster. The pattern was way wrong and I ran out of fabric so it has some weird issues like a fat V to skinny neck band. But... it's soooo comfy and it has a pocket and I love the bees. I think Goodwill is going to have to wait on this one. 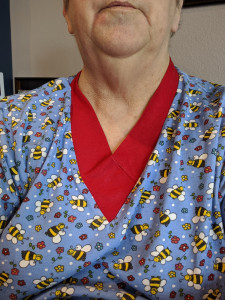 But I did find 3 more that I really love but no pockets. I'm going to try to add but first... the swimsuit.

I am nosy. Always have been. I majored in it in college. Really. All journalists do is find out about people's shit and then tell everybody. Being a journalist is a license to be nosy. I was fabulous at the finding out part. Where I fell short was the telling everybody. Once I knew, I didn't really care if anyone else did. Plus the pay sucked.

I never lost the nosy skill. Still have it but I'm finding it's dimmed a bit.

There's a couple down the hall here who moved into their condo about the same time I did - January 1992. We've been neighbors a long time. He's a retired university professor and she's a retired banker. He's kind of annoying and so is she really. They have a little yappy dog who's name is Maddie. The current Maddie looks just like the two Maddies before her. I think they shop at a Maddie store that only sells white furry yappy dogs named Maddie. But, I digress.

They are moving out. Today. Last weekend I ran into him moving boxes and he told me they were moving to Columbia City (a neighborhood maybe 15 minutes south of here). I wonder are they moving into another condo? Or are the renting? Why not move into a retirement place? Are they selling their unit? Why now?

She's actually sitting in the lobby right now watching the movers move stuff. I could easily go sit beside her and ask and she'd be fine with it. But, I discovered, that I don't care at all. I'm just not interested. Whatever. My nosy is running out of nose, I guess.

Happily my sewing is in tact. I have a new suit. 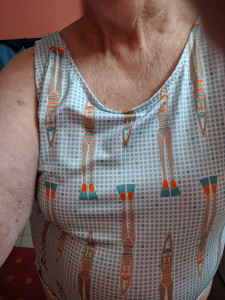 This fabric cost me $34 which is nearly twice what I usually pay. It is clearly a much higher quality. Thicker than usual. I'm not sure I like the thickness. I wonder if it will 'swim' longer than usual. My usual fabric, after so many swims, usually about six months worth depending on how many suits I have in rotation, just loses it's stretch and pretty soon the fabric starts pooling under my butt. Not pretty. I wonder how long this expensive stuff will last before the pooling. Guess I'll find out about January.

I did hop in the car and drive down to the new poke place. I don't know if I like it as well as Uwajimaya's but I do like it a lot. This week they have a new friend program to incentivize. I rarely sign up for these things usually because they require a card. But this place is owned and operated by kids. You don't need no stinkin' card! They sucked me in and now I am their poke bitch. Oh well could be worse.

I need to do laundry. But, tomorrow seems like a good day for that. I think I'll see what Steve and Kate are doing about those bad guys in Line of Duty.
Collapse