It's such a joy to have a phone that works correctly every time I try to do something. I had high end feature phones when they first came out and then went right to the first real smart phones and have had them ever since, so now, more than 20 years. Even so, until so many things I tried to do became unstable and/or not doable, I didn't realize how much of every hour involves some kind of really important mobile phone operation - some with no Plan B.

I think I'm going to spend some quality time today making sure my backup phone can step in and take over seamlessly with things like running the air conditioner, the window blinds, Google Pay, the TV, car entertainmet and also email, texts and phone.

Sure I can do all those things via other means but who the hell wants to? Not me!

More car news. This morning, the Annual Checkup Time Is Here light flashed when I turned it on. So my plan to get that done when the mirror back part comes in is a good one. Both items will cost more than I'm happy about BUT if I combine the two I only get one big shock. So not all bad. The land of Denial is not a bad place to live. 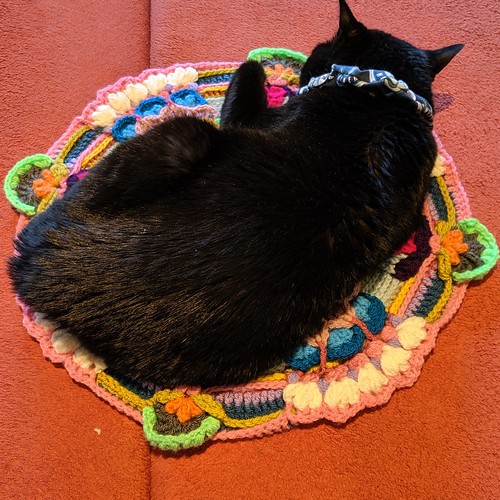 My fault for putting it there. It's ok. She's not really healthy right now so whatever she wants is fine. I'm not sure what's going on with her but she's not retaining her food. Attitudinally she's fine. She's happy and perky and her same old self. But she now throws up about every other day and I find diarrhea in the litter box often. She eats a lot to make up for it and is enthusiastic about her food and is drinking water. A trip to the vet stresses her out more than any other cat I have ever seen so that is really a very last resort. She's had her blood tested within the last year and it's fine. The next step would be a scan which would be very expensive for me and probably scare her to death. So I'm watching and cleaning and appreciating her.

Edit to add: She's had this same whateveritis before and recovered nicely so I'm sure this, too, will pass. And, of course, if she loses her perky or her happy, I will take action. Right now, she's fighting my fingers in hopes I'll quit typing and start ear rubbing. Ok will do.

So... these three games are biggies for both teams and for me and my nephew and my brother. I kind of wish baseball had tie games.

I took my phone over to the little market in the next block. I looked around for something to buy and wouldn't you know it? My focus went right to the high end ice cream shelf. Pecan Praline. I got a pint.

I told the clerk that the ice cream was an excuse to test and see if my Google Pay was fixed. She was all over that as a plan. It didn't work. Then she said 'let's go try this other terminal. this one is sometimes twitchy.' Sure enough, at the non twitchy terminal we hit pay dirt. Worked like a charm.

When I got home, I gave it a quick taste test. OMG. high end ice cream is my cryptonite. I will forever be morbidly obese as long as they keep making this shit.

I also spent some quality time with my spending spreadsheet. I also made a friendly-ish URL for it. http://b.link/spend-2019 I'm going to keep the year in one sheet with a tab for each month.

And speaking of spending... My new scheme of OK Google in the car is turning out to be pricey. My plan is $20 a month plus $10 per gig used up to 6. Until this month, I mostly used under a gig so my total bill was generally about $30. But, now, using data in the car for every trip, my bill is going to be closer to $40 a month. Still not horrible in the world of cellphones but is data in the car worth $10 a month? Probably. Plus, in a crunch, it would be a very easy $10 a month to cut back on. So maybe ok... maybe.

Apropos of absolutely nothing, a fashion rage right now is coveralls both the farm kind and the upscale fancy fashion kind. Both kinds, by the way, are stupid. This will become abundantly clear to all these women, the first time they go to pee in a pubic toilet and have to balance their purse and their butt while holding onto their coveralls so they don't drag on the floor. Seriously, those things may be lovely but are ridiculously impractical. Unless you never have to pee.

There's a very nice little smoked meat butcher deli sandwich shop around the corner. They have started selling baggies of their left over bits and pieces. All kinds of ends and odd slices of their various smoked meats. A very generous amount for $5 a bag. And they are called... Butt Bags! Which makes me giggle every time I open the fridge and see mine. I'm about to hit the bottom of mine so Butt Bag is now on my shopping list. I'm as easily amused as a 12 year old.

And, finally, I'm just about over the Ellen Show. Today was yet another day with an hour of a Kardashien. (I don't know if that is spell correctly and I don't care and I'm not looking it up. I don't want Google or Amazon to think I care.) I find myself fast forwarding through most of the show these days. BUT, I'm now totally addicted to the podcast that the staff does - Ellen on the Go. I love hearing about the behind the scenes shit. I think now, I'll just record and not watch until and unless the podcast mentions something I need to see. Then I'll look and delete. It's a plan!

Zoey is sleeping in her bed next to my chair. She was snoring softly a while ago and now she sleep purring. Loudly. That's one busy cat nap! 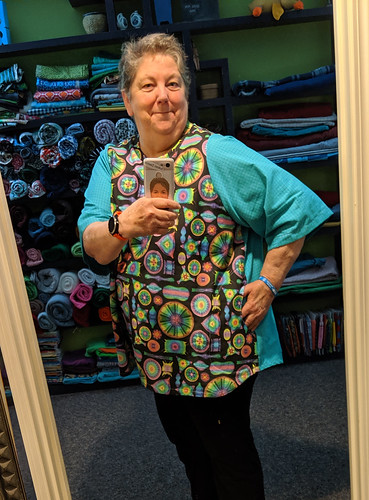 The front is expensive fabric so I only got a yard. The blue is a sheet I got at Goodwill a while back. I might shorten the sleeves but I might not, too.
Collapse