Yesterday, I spent way too long trying to make a web thing work and I never got there. Today I learned that I actually did get there but was just checking too soon to see results! Yahoo.

Yesterday, I tested out my new phone holder for real and it works great. The phone stays put without effort and, yet, is easy to plunk in and pick up with one hand. BUT it's sitting in this little drawer under the radio and now I can't close the drawer. I thought I could live with it but I hate an open drawer. So I brought it back upstairs to see if I could maybe shave enough off the top to preserve the function and still close the drawer. The first think I tried was my handy cut anything scissors. Worked perfectly on the first try. Phone still sits that nicely but now I will be able to close the drawer! Yahoo!

After my swim, I came home and made breakfast for today and the rest of the week. I whisk up eggs, cream, salt, pepper and add a bunch of shredded cheese. I put sausage crumbles in the bottom of large silicone muffin cups and pour the egg/cheese mixture over them. About half full. Then I bake at 3:50 for 20 mins. Once cooled I just store them in the fridge. In the mornings, I nuke one for 30 seconds and pop it between two halves of a toasted english muffin. Today I poured the mixture into a bigger cup for breakfast today. It was delish and now I'm set for the week, too.

The ballgame is on now. It started at 10 our time. It's our third game against Cleveland. We lost the first two by one run each. This game may be better. 1st inning, we hit a grand slam home run. I feel better.

It's warming up here in Seattle. We are looking down the nose of a week with the highs in the 70's (20's C) with a dip into the 80's by the end of the week. I was hoping to hold off pulling out and setting up my air conditioner until at least the end of May but my unwillingness to suffer heat means that it's time. I used to pull out my floor fan first BUT last year I discovered that the floor fan (a fancy Dyson) uses as much energy as my air conditioner. And my eyes don't like fans.

So, when I finish my coffee, I'll pull it out and set it up. I've learned by experience that waiting until it's hot to do the set up is a sweaty biz. Forearmed is cool ready. This year, in addition to setting up the vent system out the door, I'll also be reconnecting it to the network. Fingers crossed it all goes nicely. 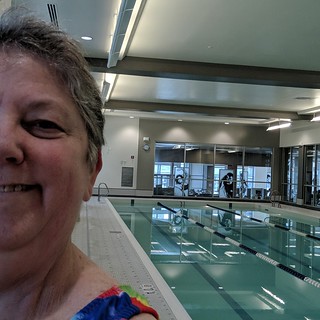 There were some tricky bits that I had forgotten about but once I figured out the tricks, it was easy sailing. And way better than my old setup which involved a pet door insert and lots of make do. And the end result was not nearly as sleek looking.  I keep this baby behind that blue curtain and so I didn't have to drag it too far. Also I store all the acctrements back there with it.

I had to move one of Zoey's beds and her stratching post so she'll be out shortly to examine the site and give it paws up or paws down.

The only hitch with the network was remembering my air conditioner's password. I did.

I started using a portable air conditioner in 1999 but didn't start this journal til 2002 so didn't keep records til then. But here are all the set up and take down dates for the last few years. Kind of a global warming story, too. 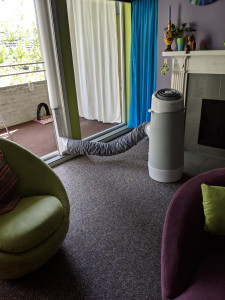