I decided to skip a swim today. My pool is closed and the good city pool is just too hard to get to and harder to get home. I wouldn't have given skipping another thought except tonight's a Diamond Club game. I decided a long time ago that after staying out late after a ballgame, there will be no swimming the next morning. To this week, that's two no swim days - back to back.

So this morning I woke up at 5:20 and changed my mind about skipping. I got on my suit and headed out to the city pool that is on the other side of downtown. It's an old pool and always crowded with problematic parking. But, there is lap swimming every morning from 6-7:30.

Getting there the most direct way involved going through several different construction zones and waiting for a long freight train. I could have taken the tunnel through town and, likely, that was the better route. But I made it and discovered tons of parking.

At my gym we have 3 lanes, no life guard. Pick which lane you like and go.

At city pools they have 5 to 6 lanes and life guards. The lanes are marked which is very handy. There's Very Fast, Fast, Medium, Easy and Very Easy. I got there just as they had opened and there were only about 3 swimmers. I hopped into the Very Easy and took off. I was later joined by two other swimmers for about 20 minutes. They were clearly faster swimmers who wanted to go slow and side rest a lot. It worked out perfectly.

The last time I was there - several years ago - the locker room/showers area was old and dark and creepy. They have revamped it completely so it is now really nice. I let Google guide me home and sure, enough, she took me through the tunnel which was fine.

Actually, probably taking the tunnel both ways is smart and makes that pool more accessible BUT. Starting something this Summer the tunnel will require paying a toll. And, since I'll be in it during rush hour, it will be a FAT toll. So, there's that. But, otherwise, this city pool is, I think, nice viable alternative on weekdays. And maybe Saturdays. Sundays, their lap times suck.

I just focused on the fact that tomorrow is the beginning of the month. Hmmm. Ok, so I need to get my finance tracking figured out and organized. And I need to move some money from one account to another as soon as the first of the month checks come in.

Also I have my annual physical next week. This is always somewhat of a stresser for me. I do not want to hear that I have diabetes or anything else that will put a crimp in my lifestyle. If I don't hear about it, I can live in denial which is fine by me. On the other hand, if I've squeaked by another year, I will know that in a week and that's the opposite of stress! Plus, my ears are driving me crazy. I need him (the doctor) to fix that.

Today will mainly be crochet. This new pattern is tricky and requires concentration. And then the game tonight. We're playing the Cubs who we only play once every six or so years since they are in the other league. It will be an interesting crowd at the stadium. 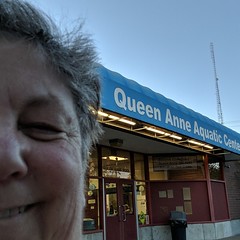