Yesterday I had a very unpleasant encounter with the building manager and it really just colored my entire day a dull ugly color that I really couldn't shake. It's so weird. I really enjoyed and along with all the building managers except the first one and the last two. Oh well. Come time to go to the game, I left all the ugly color behind and had a great time. We played the Texas Rangers and they put a brand new pitcher on the mound. It was his first game in the major leagues and his day turned out to be far worse than mine. He pitched as if his last job - which he left yesterday - was accountant. And we took advantage. 5-0 in the 1st inning and then we proceeded to chew through bunch of their relief pitchers. Until they finally got to one of our relief pitchers and the final score was Mariners 14, Rangers 2. And we get to play them again for the next 3 days. We need the wins.

Julie and Erica who sit next to me were there and, as always, such fun. But last night, the casino seats on the other side of me were filled with three guys who were equally as much fun. It was just a great, great game. Even though I had to leave early.

Every quarter they clean and wax the lobby floors and elevators from 10 pm to 5 am and so they are unavailable to residents.* I had promised the building manager that I would try to make it home as close to 10 pm as I could. This turned out to be in the 7th inning and I made it home at 10:05. But, between the broadcast outside the stadium and turning on the TV when I got home, I really didn't miss much so it was fine.

*The lobby being closed was not the reason for the horrible exchange with the building manager... the way he handled my telling him that I might be home a few minutes after 10 and need the lobby and elevators was the issue. Turns out at 10:05 there was zero sign of anyone working on or getting ready to work on the project AND there were 4 people who came in after me in 2 different groups. But. What.Ever

I actually even stayed up after the game for a little to listen to my book and then finally went to sleep way later than normal and I slept like the proverbial log. It was luxurious. I woke up this morning at 6 and then went back to sleep for another hour and a half.

No big plans for today. USPS says they are going to deliver some new tech. I signed up for the Amazon Auto Echo. It's Alexa for the car. But, it's by invitation only. I requested an invite early last Fall and so far... crickets. So. Screw 'em. I bought the Roav Bolt. When I bought it, it said May delivery. And, here is it still April! Take that, Auto Echo! It's kind of hard to see what it's going to do differently than my phone already does. And I may have just scammed myself... We'll see today.

The Edgar award winners were just announced so I think I'll pop over to Audible and see if any look interesting. Then I might get dressed and make up my bed. I'd like to get the latter done before lunch. No reason. Just seems right. It's hard to know how to take a day off when you are retired. 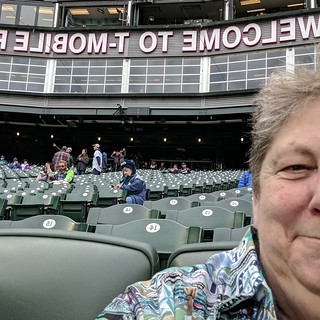 My body has gotten progressively older but my mind, I think went from Woodstock to the nursing home in the blink of an eye. All of a sudden, it seems, I am afraid of falling... all the time. I have not fallen but still I feel like I might. I can no longer open jars or boxes or push myself off the floor or out of some chairs. I think I broke my toe today when I stubbed it just walking in my living room.

Ok some of that is an exaggeration. Not the toe thing, and, btw, it hurts like a bitch and is already looking very grape like. I can get off the floor but it's a huge effort and I can only do it by rolling into a table stance and getting up from there. And sometimes not that. The opening of jars and boxes is real. I do not have the strength I used to and likely haven't for a while but my mind just now figured that out.

It's ok. I can pull myself up after a fashion if I have to. I can eventually get shit open using tools but geesh. What a PIA. It's ok. It's inevitable, it's still just shocking when yet another piece of evidence comes to light.

Today did turn out to be a big tech day here. I got a Wyze Sense which is two tiny contact sensors and one eagle eye sensor. You put one side of the contact sensor on one thing (like a cabinet door) and the other on the jam and the app will tell you when that door was opened or closed. I put it on my dryer knob so now I can tell when the dryer is done. I haven't figured out a use for the other one or the eagle eye which is a motion sensor. But they were very impressively packaged and really nicely designed and set up perfectly and also really cheap. I'm sure I'll figure out very cool things for them.

The car thing came too and I did not scam myself. It pops into my cigarette lighter port and feeds sound into my radio and is lightening fast in responsiveness. I set it up so that when I get into the car in the morning I can say 'good morning' and it will tell me if there are any traffic issues in my way, then the weather and then give me the news from news outlets I chose. I've suffered through my last pledge drive and no longer have to listen to the vocal fry tones of the 12 year old NPR reporters.

I even made a routine for the Saturday pool that kicks in when I say 'happy saturday!'

Yes, I could have done this all with my previous setup BUT... half the time the bluetooth didn't kick in at all and then my phone didn't respond. This thing snaps to attention immediately with no hesitation. I like it a lot.

And I did all the laundry. And picked up stuff around the house. And put away all my baseball stuff so that it's ready for next Wednesday's game. And now it's 2 pm. I think I'm going to watch some TV. Oh! I have last night's Jeopardy to watch. On it!
Collapse