Today's swim was a difficult slog. And soooooo slow. I started out at a slower pace in hopes of having enough breath to make it comfortably. That part worked but it was just a slog the whole way. I did not think up any more body reinventing scenarios. I used a new and different playlist and so just listened to the music and flapped one arm after another.

My car lives in its space in the garage which is one flight of stairs and then an elevator ride below my condo. When I got into the elevator coming home after swimming this morning, I was panting. So out of breath. And it triggered a memory of pretty much this time last year.

COPD is a degenerative condition. I will never get better and will get progressively worse. How progressive? How much worse? No idea but, of course, I constantly look for clues. Is this as good as it will ever be? Or is this just a dip in the action, so to speak.

Last year I had a really bad time after swimming in a pool who's chemicals did not like my lungs. This time last year, I was still recovering, I thought. I had the same breathlessness in the elevator coming up after swimming.

BUT... I did get way better. I also remember months later, one morning when I realized how much better my breathing was.

So I'm thinking I'm allergic to early spring. And, in a month or so, all will be fine. That's what I'm going with. And, also, I'm going to be more vigilant about taking a day off swimming now and again. Like tomorrow.

The caster wheels I ordered from Amazon will work but they are bigger so I'd have to replace all four and it would make the already a hair too tall ottoman, taller still. BUT, except for size, they are identical so I went back to Amazon and found identical in the right size. They will be here today. I'll probably just return the bigger ones. But, at least now, I know I've absolutely got a fix.

Also broken is my tissue box cover. Well, not broken but the tissues I bought at Costco are in a bigger box so the cover does not fit. I like it because it's gray like the chair it sits next to and so just kind of blends in. Turns out I have just enough of that very same fabric to make a cover for the bigger size. So that will be happening this morning.

I have no errands I want or need to run so I think I'm going to just hang here. One of my favorite TV shows - Line of Duty - has a new series coming soon on Acorn.TV so I'm rewatching from the start to get ready. Also the new Bosch series is out on Amazon. And TiVo still has some good stuff waiting. So, I have TV entertainment.

I finished up an audio book last night and the next one is queued and ready. I am still reading the palliative care doctor's book on Kindle and still finding it so interesting. And, I'm way behind on my podcasts. Not enough hours in the day.

Oh, funny swim thing. There's a guy who comes once in a while. He's huge - 6 feet plus with muscles carved out like from marble. And very dark black skin with tatoos. He wears black googles, black spandex swim suit and a swim cap that is bubblegum pink. It's shockingly and hilariously incongruently pink. He got there today about midway into my swim so I had a lot of time to backstory him. At first I thought maybe he was just making a very cool statement. Then I dreamed up his little daughter who was with him when he bought the cap and after winning a bet of some kind, got to chose the color.

He was still swimming when I got out and as he made the turn at the pool's edge, I saw that the cap also had pirate skulls on it and was from triathlon. I was kind of disappointed. I like my version so much better. 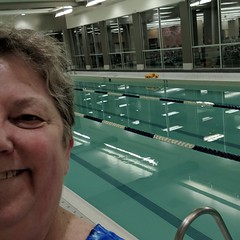 My fancy assed kitchen garbage can has a holder thing in the lid for a charcoal pouch to absorb the smell. Yesterday was, apparently, that pouch's expiration date. When I first got the fancy assed garbage can, it came with two filters. I put the first one in, expecting nothing.

But, then, one day, the can just started stinking. So I switched it to the second one. I figured it was a fluke. Until today when I learned that it was, in fact, NOT a fluke.

Happily as I typed all that I remembered I had a third one that the company sent me for filling out a survey. Sweet. I mean,literally, not stinky!

I also ordered some replacements from Amazon. I went with diaper pail ones because they are cheaper. If they don't work, I'll pay full price for the ones that do because I'm hoping to be able to forget what stinky garbage smells like!

My tissue box now has a cover. My stack of mending is gone. My crochet blanket is now ready for corners. The center is round and then you add corners and then you crochet a big ass border. Corners are next. 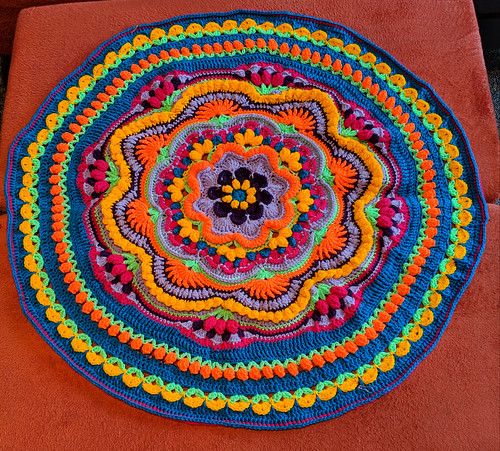