Sometimes my mind wanders down a path that makes zero sense. Mostly this happens while I swim. I have an hour of uninterrupted time and my mind just has a field day. For the past couple of days, on and off, I've been conjuring on - what if the body's crotch - genitals and elimination tools - were in our arm pits instead of between our legs? Both in one pit or sex in one, poop/pee in the other. How would that affect motion, clothing, plumbing, architecture.

Then, today... what if our noses were the other way around so that the nostrils faced the sky? what kind of screens - nose clothes - would have to be invented to keep crap out and would you drown when you had a cold?

My brother says swimming is boring. He's so wrong.

A caster wheel broke on one of my ottoman (ottomen?) last night. I think they are maybe not built for fat people to sit on a lot when they are on carpet. Happily, it looks like maybe Amazon has the same casters. I ordered a set for $13. We shall see. They will be here today. There are others but it would be nice if these worked perfectly.

I think I might be fighting off a bug of some kind. I've been so sleepy during the day this week. I hate day sleeping so much. I hate to sacrifice the time, plus I don't want to make it hard to get up at 4:30 for swimming. So I just plow through. But, also, it's been harder to breathe. Rather, I'm running out of breath way more easily. I can even tell in the first couple of swimming laps.

Once again - and I probably think this at least once or twice every single day - the life I've created for me is so perfect. I don't have to go anywhere or do anything nor am I expected to for any reason. So this current trouble breathing does not really impact anything adversely. Also I am grateful that I live alone. I don't have to explain or cover up or make any compromises in what I want and how I want to be. I am so very lucky. In every way.

Well, except in my baseball team of choice. The Mariner's glory season is over. It was sweet but really really short. They cannot win or even play well any more. Back to their old tricks. Bummer.

I have sewing projects cut out and ready to do but I'm also really into the crochet project right now. And I haven't forgotten about the tiny rooms. But, I also feel like I need to get out if only for a small errand. Maybe a walk through the Goodwill store to see what's new.

I think I'll get dressed and then decide. 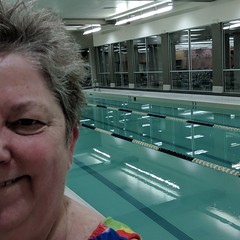