I'm so weary of apps, advice, warnings that your life will be ruined by screen time and, like eating things that taste good, you should avoid it as much as possible.

My life is ever so much richer and more fun because of all the wonderful things that my screens bring to me. Putting myself on an online diet would be as stupid as restricting myself to eating only healthy things regardless of taste or enjoyment.

I noticed last week that four of us were around a dining table between courses and all four looking at our phones. I felt the judgement of the masses on our heads. Most of the time when our phones were out, we were checking on facts, scores and or other bits of info that ultimately enhanced the discourse around our meal.

Judge all you want. If you need me, I'll be in front of a screen. Happily.

And a whole different coin.

I have a friend who is constantly working to make her life better. I so admire her efforts and her successes and that she stays at it always. Lately, she's taken to exclaiming with victory, that she is now a trophy wife.

To me, there is nothing to admire or respect in a trophy wife. They are so named because they are for looks only and dumb as the metal they are made of while being the prize that the husband purchased.

She, clearly, has a different view of the term and has explained so but still it makes me nuts to hear her call herself a trophy wife. Just nuts.

The Mariners had this crazy bit of scheduling that had them with a day off Tuesday - going to Chicago and playing one game against the White Sox yesterday. Then another day off Friday and playing the White Sox again Saturday and Sunday. But, yesterday's game got rained out so they now play today, tomorrow and Sunday as god intended. At 11 which is very nice.

I have tidying up to do around the house. A little here, a little there. And I may make some bears but mostly today will be TV and baseball and crocheting. I could use a grocery run but I can do that this weekend. 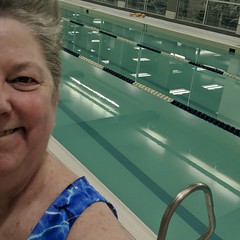 The Mariners lost ... wah wa... it was a kind of stressful game and given a few more innings they might have turned it around. Oh well. Tomorrow is another game.

I decided I wanted chicken for dinner and, as luck would have it, I found two thighs at the bottom of the freezer. They had both been in there way too long BUT, I'll bake 'em and they'll be fine.

I went out for a walk this morning and I didn't even have to. I no longer have two walk my minimum around the block any more. Now I can walk if I want and not if I want and today I wanted. I walked up to Uwajimaya and Daiso and it was lovely.

I made an Amazon sale today. My last one. I am now officially out of left over tech to sell. Everything I have now is either in use or not worth anything and still a little functional (I'm talking to you Very Old Fire Tablets.) I took the stuff I really never use to Goodwill.

Last night I dreamed I lost my phone but I was really relieved to know that everything was backed up to the servers so I really only lost $$ and nothing irreplaceable. I was even happier when I woke up and discovered that it was just a dream and I still had my phone with me.

Tonight there is junk TV on TiVo to watch.
Collapse