I've got no time. But I can't not post the outline even if only so I'll remember it later.

We started out with breakfast back at Planet Java. Then Bill (brother), Matt (nephew) and Cyndi (nephew's wife) all went on a tour of the historic underground of Seattle - I came back home to reorganize and then met them after. We wandered down to the ferris wheel which was great fun as always and then on to Pike Place Market and lunch at the Athenian which is really kind of a dump and crowded and noisy BUT is the restaurant in Sleepless in Seattle and also has really good down to earth seafood. We ate ourselves silly.

We wandered around the market a little and wandered on home. Tonight we went to Nijo. It's hard to find seafood in Des Moines, Iowa so Cyndi is getting all she can. Matt will eat whatever to ensure she gets what she wants.

We watched a few innings of the Mariner game until it was pretty obvious that the Red Sox victory was not a lock... again... and they went back to the hotel. Bill has gone to bed. It's just me and the game in the 7th inning and so far, the Mariners are holding on to a nice little lead.

Tomorrow kicks off at the Space Needle and then maybe a duck tour. 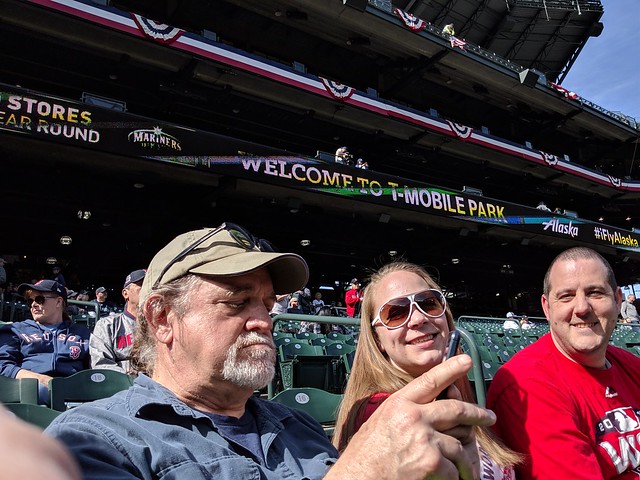