The hapless Mariners won their second game in Tokyo. These two games count!! But there will be no other games played in Major League Baseball until the real season starts next Thursday.

So... for 7 days the Mariners are the very best baseball team in all of the MLB. We have 2 wins more than everyone else! The Oakland A's (oh how it sucks to be them for a week) have 2 losses and everyone else is 0-0. It's glorious.

Today's game went into extra innings and my taping ended before the game did so I had to finish via words and highlights. To us Mariner fans, the news was the win, but to the rest of the world, the news was that Ichiro retired from baseball after the game. He made a couple of decent defensive plays and did nothing at the plate. It was time. And they really did it up right. The 45,000 spectators, teams and press gave him a true hero's goodbye. It was classy and really nice. Sometimes baseball does stuff exactly right.

Back here in the town of the winningiest team in baseball, we're now doing laundry. This morning I changed the bed linens and retired the winter comforter to it's space in the closet. See you next Fall! I love sleeping under that thing but, the fall/spring quilt and the summer quilt look so much nicer, tidier on the bed. So I'm ok with the change. 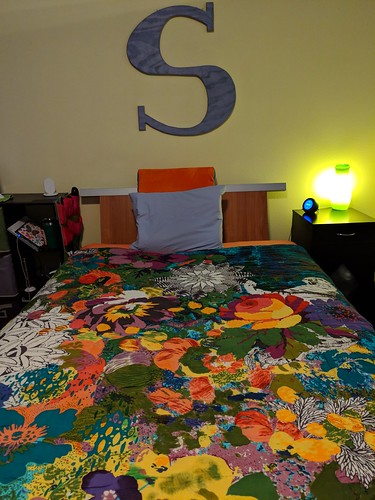 Next up is sewing. I want to finish the top I started yesterday and maybe start another new one. While I was swimming this morning, I remembered some really cool fabric I got just as winter started. It is black on cream until the sun hits it and then it gets colors! I saved it since the sun was going into hibernation. But now is the perfect time for it. 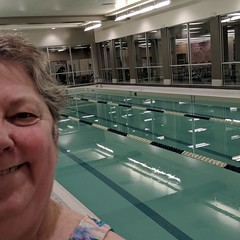 I took my walk around the block around a different block today and made a very cool discovery.

When I first moved in here - January 1991 - there was a bus stop on the corner and I used it a whole lot. The buses that stopped there took me up to Pike Place Market and beyond. I discovered Seattle from that bus stop. Then, one by one, they started moving buses from that stop. Then they moved the stop up two and a half blocks. Then about 5 years ago, they moved the last buses. The end. We now have to go from here on 1st Ave to 4th Ave to get a bus. Pain in the Ave.

But, up on 4th is also the bus tunnel which goes under downtown and makes lots of stops there. It's quite handy to use so ok.

Except, now they are moving all the buses out of the tunnel and reserving it for the light rail line only. So all the buses now are back on surface streets. (Surface street buses make turns and stop all kinds of crazy places so much harder to figure out.) Pain in the Ave.

Also, even though the gym is only 11 miles from here on a very busy road, it is fairly impossible to get from here to there on public transpiration. You either have to walk a really long way or take two buses in an lovely around-your-elbow-to-get-to-your-knee scenario.

But, today, on my walk, I discovered, one block from here a whole new bus stop!! Starting this Saturday. And one of the buses is a frequent flyer that goes directly between here and the gym!!!! YES!! This is major. I will be able to take the bus to and from the gym any time I want. Wow. Very cool.

Also, very cool to have handy bus stops, once again, that go up to the center of town regularly. This is so good.

I finished my new top and it's fun. I can't seem to get a good photo so you'll just have to trust me. I did take a video, though, of the magic fabric that paints itself in the sun.

I'm going to cut that shirt out as soon as I fold the laundry and put it away which is happening right now.

Also, turn off your sound your you'll hear my stupid COPD breathing. I should really not breathe during videos. Sorry.