This morning, for the first time since last Fall, the butter was soft enough to spread easily. This is the counter point, season wise, snuggling under a fluffy comforter. I do appreciate that I get half a year of each.

The past couple of weeks have been filled with reminders of my age. Turning 70 is on my mind, certainly, but there are also physical signs reminding me that I am old and while each one is shocking, the intensity of that shock is wearing down. I'm cataloging if this, then that's. If I can no longer get on a ladder to get to the stuff in the storage cabinets, I'll hire someone via Thumbnail or Task Rabbit to get it all down for me and I'll store it some place else or give it away. If I can no longer... then I'll...

I don't really worry about it. I'm still very hopeful that I'll drop dead before I have to make too many compromises but it's interesting to me how many times a day now, the whole situation crosses my mind.

The sun is now streaming in the windows I washed yesterday and damn, I did a pretty good job! Not perfect but, way better than it was. Go, me!

Today I want to get some more homework done for the University data study. I have a minimum of four pieces to complete. I've done one and I'd love to knock out another one today.

And, then my walk and maybe some bears and the rest of the usual... another nice day ahead! 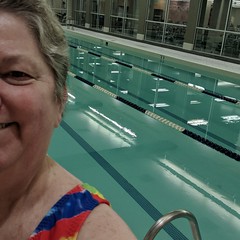 Last year sometime, Grocery Outlet had 5 boxes of Celestial Seasoning's Lemon Zinger tea on closeout for a Get This Shit Out Of Here price. They were k-cups and I think a box of 12 was selling for something like a buck fifty. Lemon tea sounded good to me so I bought all 5. I'm not a tea drinker. So they have been on the shelf since.

Then, when my old Keurig died and the new one arrived, I noticed an button in it that said "Iced". I grabbed one of the Lemon Zinger cups to try it out. Turns out, I don't think it does anything different from the non 'Iced' buttons but, I did learn that Lemon Zinger iced tea is DELICIOUS!

This started out as a kind of nothing day but it got momentum. I did finish off another homework project so now I'm half done! and then I walked up to Uwajimaya and back. And then I decided that it was time to put the Instant Pot into storage for a while - at least til next winter. So I had to move some storage stuff around and, in the process, added to the Goodwill bags I was collecting to take tomorrow.

In the storage area I discovered my toaster oven. I haven't had it out in quite a while. I thought that might be a fun thing to have out again for a while. At least to try again. So then the hunt for the pans. I think maybe they all went to Goodwill. Oh well, guess I'll go buy some at Goodwill tomorrow! Circle of Life.

Also I found an old Chromebook and an really old, mostly useless, windows tablet. I reset those and they will go as well. The chromebook took 2 minutes. The windows tablet is coming up on an hour. And is only so far 75% done. I think it has about 2 bytes of memory.

I think my lungs are not happy with the air. Or the dust. Or both. This morning, when I got in the pool my face was so relieved to get all the dust and stuff off I could feel the difference in breathing in 5 minutes of swimming. One massively handy side effect of swimming is that it's a great way to get every single bit of nasty airborne stuff off of you. Honestly, if there was a pool handy right now, I'd hop in and swim some laps. I should close the door to the terrace but I dontwanna.

Well, we interrupted this entry for a massive coughing fit. It was ugly. And one of the longest, most intense ones I've ever had. It's hard, dry cough that sounds truly gross. I'm so grateful no one was here to enjoy it but me. It's going to be a long, fucking Spring, I'm afraid.

But, while I was coughing, an email came in from the Mariners. A free ticket to a game on account of my birthday!! There's one towards the end of April on a Wednesday at 3:40 that was an option with a decent seat so I said, cool and thanks!

I just remembered that somewhere I have a little personal humidifier that blows moist air into my face from a water bottle. Another interruption while I dug it out. - yeah for finding random shit! 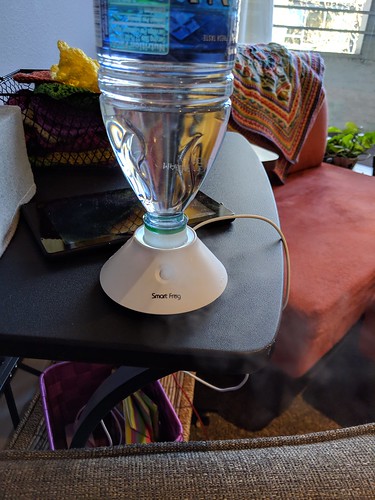 Oh and Zoey also made out by 'shopping' in storage. I get tired of seeing some of her scratching and lounging toys and beds periodically so I toss them into storage just to get them out of sight for a while. I pulled out several to get to the toaster oven and she immediately started rubbing on this one and then just sat one it when I put everything back. So I told her she could have it but she had to keep it on the terrace. Now she keeps going out there to make sure I don't go back on my promise. 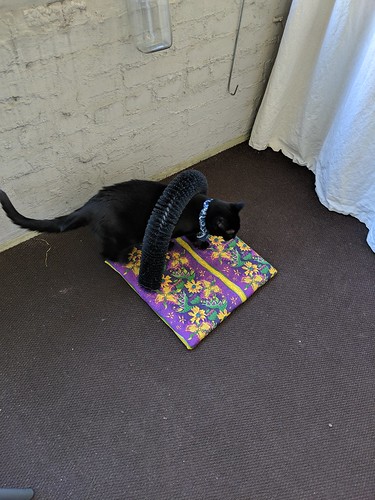 Ok, so I think the humidifier is working or maybe it's just sitting down and breathing without moving but what ever. No more coughing. Whew.

Maybe time for some TV and crochet.
Collapse