I slept 3 hours longer than I normally do... so, yeah, I'm rested. We weather is for sure changing. The guy who is at the gym when it opens every morning and wears the exact same thing every single day - black shoes, black pants, black t-shirt, black jacket - this morning showed up without his jacket. Momentous. (In my head, I call him Black Jack.)

The other Real Regular - there every single day when the door opens, like me and Black Jack - I call him Ben. No idea why except he just looks like a Ben.

There are other regulars who are there on some days or most days. But, me, Black Jack and Ben are there every day. And have been now for more than a year. About 3 or 4 months ago, we started saying 'hi'. And then, one time, Amanda (who opens on Thursdays) was late and we very nearly had a conversation about it but, then we saw Amanda running to open the door. Whew.

I came home and made breakfast with fresh eggs from my housecleaner's chickens. And now I'm trying to decide which thing to do next. I have my tiny room stuff out and it's bugging me. It's weird this tiny stuff. Successes are amazingly fabulously rewarding. Look at that tiny pitcher!! Failures are butchering. What a pile of mess... why in the world do I try to make this tiny stupid shit??

And then there is a mess on my dining room table that I see always.

When I put it all away, I think, I should get that out and work on it some. And then it's all out over everywhere and I think, I need to pack that crap up. At least the sewing is in a room off by itself and the crochet is in an ottoman where it's hidden (except it's now at the point where it doesn't need hiding!).

Maybe I'm just not putting the tiny stuff away for long enough. Maybe it's bigger breaks I need.

Clearly these are monumental issues.

Just now I need to clean up the breakfast stuff and hang up my wet swim suit and go for my walk before I think of too many reasons not to. 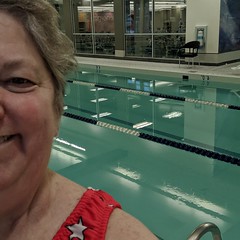 I have watched Project Runway since day 1. And I was really getting over it. I think, the last time, I fast forwarded through all the bitchy drama which means I pretty much watched only about 10% of each episode.

Then Heidi and Tim split and I thought, OMG, that's it. The End. But, I forgot to tell TiVo so episode one of The New Project Runway recorded. And I thought I'd give it a go before I deleted it.

Well, guess what? It does not suck at all! There is far far far less drama. Only one person back biting. And then only a little. It was straight up interesting clothing design and construction. Now, when they whittle down the number of contestants they will likely add in more hysterics but for now. I enjoyed it enormously.

And, for once, the exact correct person got eliminated. Cool.

The other day, at the store, I spied and picked up a ready made meatloaf for two. I finally had it last night and it was spectacular! I also left enough for another dinner (tonight) and a sandwich (this afternoon). It was quite the treat. I must remember to look for another one next time I'm at that store.

I think I may be getting a cold and I am more than a little pissed off about that. I haven't had a proper cold in years and now, with my brother and nephew and wife arriving here in a week and some change, it NOT the time to be breaking my streak. BUT then I remembered the prednizone. Yep. That sweet Dr. Lung gave me a prophylactic prescription for just such an occasion. Not so much for working though a cold for my convenience but because he's pretty sure any cold I get will go right to my lungs and then right to pneumonia. So my happy little pills will be killing two birds + a cold.

So now I'm just annoyed at the idea but not stressed about it. I have a fix. Drugs are so wonderful.
Collapse