I heard, on the way to the pool this morning, that 49 people were shot by an idiot in New Zealand. I was sure that NPR had fucked up again. They are so ridiculous these days with their 'fun' reporting plus it's pledge week-or-two. People in New Zealand don't shoot other people and 49 is like 490 in the US - per capita speaking (and no, that's only a guess - my math skills are no longer up to the task of really figuring out what it is exactly).

But, holy crap. Poor Christchurch. Poor New Zealand. I cannot imagine what this is like there. Here, idiots shooting people is just a Tuesday but, there..

Here, it's also turning warmer. It's no longer ice cube city standing outside the doors waiting for the gym to open. I think it's also time to put away the space heater. Normally the space heater goes where the A/C lives in winter - swap/swap. But, it's way too early for the A/C. I need to find a home for the heater at least until May or, hopefully, June, when It's A/C time.

It's still cold enough for fabulous sleeping. I know those days are numbered so now, every night, when I snuggle down under the comforter, I'm extra grateful for the few remaining days of that that are left.

Also the sun. I suffer from the opposite of SAD - well, actually, not really. I have Seasonal Affective Disorder - it's just I hate those times of years when the sun is relentlessly out every goddamn day. The glare hurts my eyes and I hate the hot. So this time of year, when I know we are facing months of glaring sun and hot, I'm bummed big time. This condition is exacerbated by having to listen to everyone - in elevators, on TV, on the radio, on podcasts - everyone in voices rife with vocal fry, squeal about the wonderful weather.

Get off my weather lawn!

Ok, so, hopefully, that little weather rant will last and I won't have to do it again... soon anyway.

They building people came by yesterday to discuss the drywall damage left by the leaks of 3 and 2 years ago. Finally. I am certain that, after all this time, they will chose to fix it while my out of town guests are here. And I will say no and that will set the whole thing back another 6 months. The building manager has a spectacular inability to coordinate effectively and communicate anything. The guy in charge of fixing it says it's a very simple job that should take an hour to fix and less to come back the next day and paint. I'm translating that to a week of construction disruption while they do 4 minutes worth and then say 'we'll be back tomorrow' and leave all their shit spread out in my living room.

Man, I am just a bitch machine today.

I'm not bitching about the afghan I've been crocheting. I'm actually way more pleased with it than I expected. I am adding to the border as long as I have yarn left. I'm guessing maybe an inch more. 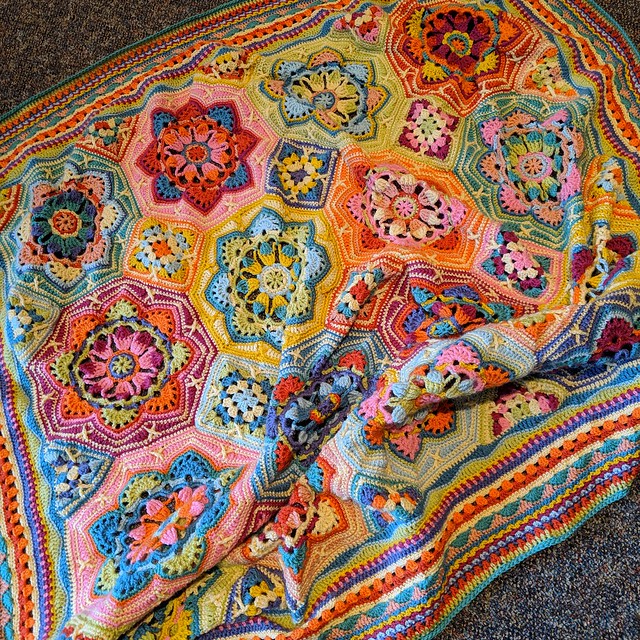 When you knit or crochet stuff with a lot of different colors, almost always it involved ending and staring different yarns along the way many, many times. Then you have to tie off or weave in all those end bits. Normally you do all that weaving in of end bits at the end when you are finished. And, believe me, it is a giant, depressing, major Pain In The Ass. Since crochet is not my first yarn language, I tend to follow directions more closely and, these directions said to tie those ends in immediately after every yarn change. It was a little bit of a PIA but I got used to it and now, nearing the end, I am every so grateful that I did it. Note to self. Do it that way always. Also, by the way, after doing this so successfully, I'm beginning to think of myself as fluent in crochet which pleases me.

Ok, so now it's time to get off my internetting ass and do something. Like get dressed. 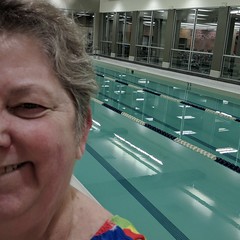