I got an email from FedEx last night saying that my package will arrive on Thursday. Cool. Cool. Except. I've got nothing on order that is due to arrive via FedEx. There were clues, though. It is coming from some guy in some 3 named business - smells like a law firm. Ohhhh maybe my very own Scrooge McDuck hads died and left me a fortune! Or maybe somebody I pissed off is suing me for severe pissing off. Now I'm intrigued.

Google tells me that the guy does, indeed for for the 3 named firm but that he's a data engineer????? and the three named firm is a data security firm???? Ok so maybe it's a letter telling me that my real family is royalty who's fortune is just waiting for me to claim. (I always suspected the royalty thing, btw.)

This morning, I got an email from my Mariners guy that my tickets had shipped and here is the FedEx tracking number. Ok. cool. Securely.

Up until last month, I could easily reply to comments and replies in a little form box in my email (web gmail). Then either LJ or Gmail (and I suspect LJ) made a change and I no longer have that option and it's driving me nuts. Because the click to reply also takes me to a window where if I don't stop and think, after my first character is typed, I hit something that says post. Way before I'm ready. I'm an old dog who actually loves new tricks but not this one.

Today's agenda may include a trip to Grocery Outlet. But, also maybe not. I've already forgotten what I wanted there. Oh wait, no, Marie Biscuits. They often have them and when they do, they are cheap cheap cheap and otherwise, they are kind of hard to find around here. I cracked open my last package today.

Otherwise, bear making and that dreaded walk. I think I'm ready to get back to tiny rooms again but... the house cleaner is supposed to come tomorrow. I sent her a note and asked her to skip tomorrow and come the next week but I have no idea if she saw the email. Sometimes she responds and sometimes she doesn't. So I don't know if she's coming tomorrow. I don't want her to have to clean around my tiny room mess. So I think I'll wait until tomorrow on that unless I hear from her. 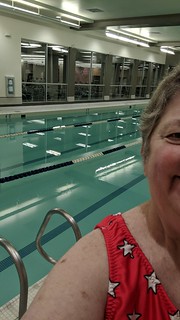 I totally forgot to hit Post! Now I have made some bears. Gone to Grocery Outlet. No Maries but I did score on some other good stuff. I still have to do the walk but I'm thinking after lunch. The baseball game is on at 1. I think I can squeeze in some steps between.

As lovely as yesterday's walk was, the one today was torture. My hips were killing me with every step. On March 27, I will give up this folly, if I make it that far. UGH.
Collapse