My swim this morning was great. I always enjoy the swim after a take a day off so much - I forget that until it happens. I came right home and made breakfast and then killed an hour or so interneting and organizing my birthday trip.

My bother's youngest (of two) son and his wife (of 18 months) are coming. (And, my brother is, too.) It started out with a text from Matt (nephew) saying they wanted to come to Seattle next Spring. I responded with great, they should come for my birthday. He was all over that - his is the week after. And then it turns out that his baseball team - the Red Sox - are playing mine for the season opener here and we had a solid then.

They have no kids (and don't intend to have any) and enjoy traveling here and there. My brother says they are fun and easy travel people. I have never met her. Or really even know much about her. I haven't seen him since he was in junior high. (He's now 30+.) We share baseball and dead relatives and one living one and that is all that I know of.

So, picture this. Hey, new wife, wanna to to Seattle to see some baseball games and my strange ancient old maid aunt that I don't know very well? Oh and let's rope in my Dad who's also older than dirt. For a long weekend. Ittle be fun?

I dunno. I'm not sure that would be the funnest invite in the world. I'm guessing she's not a baseball fan and surely not a fan of the Red Sox or the Mariners. We're going to two games. hmmmm

So anyway, they have never been to Seattle. (They live in Des Moines, Iowa.) My brother put together a skeleton schedule of things to do and see. I flushed it out a little this morning and made it into a shared Google doc.

I have one clock left to change, oh and the stove one. I'm undecided about the car one. It's a bitch to change and last year, I just didn't. It righted itself eventually and, I trust, will do so again.

Today's agenda is baseball on TV, cutting out more bears to sew up, crochet and whateverelsehappensalong. I have a bad case of Don'tWanna with my walk-every-day-until-I'm-70 project. I think I'd probably go do that first before I 'forget' it. 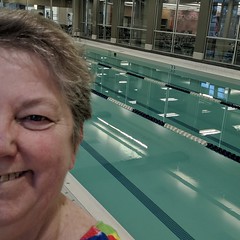