My Twitter and Instagram are all full of insipid International Women's Day - we respect all women. I kind of want to scream - oh yeah??? when are you doing to start showing it with actions instead of insipid social media content?????

I'm having a minor (I hope) attack of can't breathe really well. I'm waiting for the rescue inhaler to kick in and I think it's starting to. I think I may have triggered this one or at least made it worse... I poured in a bunch of new kitty litter holding my face over the pour without holding my breath. Dust and I have really become sworn enemies. And then I cut my hair.

My hair has been getting really shaggy looking. It's still suffering from The Incident in January when I accidentally used the clippers wrong and cut some very unintended patches out of the back. But meanwhile the hair around the patches is getting out of control. I briefly considered going back to Rudy's - they did send me a 'we miss you' 20% coupon. But every time I thought about it, I thought about how the conversation around the current state of my hair would go and I couldn't face it.

So, this morning, I put on my big girl hair cutting pants and took a deep already ragged breath (well, really a shallow cough) and did it. And... NOT TOO BAD!! If I don't study the back carefully, which I never do, it's pretty decent. And I got in and out with no chitchat and no loud music and didn't have to explain why the back of my hair looks like someone cut gum out.

Win win... but tiny little hairs maybe in my lungs?

I have a load of laundry started. I love my washer dryer. It actually has more capacity than that old POS and it's so simple to operate.

I ended up watching TV yesterday afternoon. Two new - to me - shows. I have this weird trope for new broadcast shows. I set up TiVo to record all expisodes, but I won't watch them until I have at least two episodes recorded.

So Whiskey Cavalier was actually new a week or so ago but I didn't get the required two episodes til this week. And weirdly... while the whole set up is horribly convoluted and I don't even like Scott Foley who plays the main guy, I found it charming and fun to watch. And now I have another episode all ready.

I watched 40 minutes of the first episode of The Enemy Within and killed it, the second episode and the TiVo subscription. It was tortured and I don't need to be.

And then I flipped to Amazon Prime and watched The Widow and then watched the 2nd episode and now, I'm hooked on it. There are only 8 episodes.

I may do more watching this afternoon.

A few weeks ago, Google offered to print up a bunch of my photos into a book and send it to me for free. I thought, hmmm that might be fun so I picked a bunch and fucked with the options and then saved it all and did one of just the bears and dolls and other toys I've made and given away. And then I saved it and figured I'd go back and finalize one or the other later. Today I got a reminder that the offer expires so I went back to pick and finalize and while the thing was loading, I thought, why the hell do I want a book of pictures???? If I want to see pictures, I just log in. If I want to share pictures, I just send a link. I don't need the paper. I need less stuff, not more. So I deleted everything and marked that on my todo list as done!

I finished the book by the Seattle bus driver. I'm planning on leaving it down on the bookshelf in the garage. We may not have the free shelf but at least we still have a shelf of leave-one-take-one books that I actually started years ago. And, the inventory rotates pretty vigorously.

I killed off some Trader Joe's hand cream yesterday. I really liked it but I have a house of hand cream. All kinds, all smells, all thicknesses. When I get down to handcreams I hate, I will allow myself the luxury of throwing them all out and buying another tube of the Trader Joe's stuff. Until that time, however, if anyone sees me buying more handcream, shoot on sight, plz. Danke 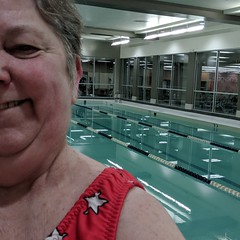