In some kind of creative brain blip, I ended up getting to the gym 40 minutes early this morning. Yeah, no clue what happened there. But, I was wide awake. I drove over and filled up the car with gas and then just parked at the gym and played sudoku on my phone. I was a nice ice block by the time the gym actually opened. But, no biggie. The pool water was finally clear again and my swim was one of the best in a while.

This morning, I'm off to pick up my Amazon delivery. Apparently they have now installed lockers. There is a nice lobby there where you drop off packages so I'm guessing that's where the lockers are. It's also next to Starbucks headquarters where they have food trucks every day at 11. I just looked, however, and the ones there today aren't doing much for me. So that means that 1. I don't have to wait til 11 when the trucks get there to go and 2. I'll just pop by Blazing Bagels - in the next block - and pick up one of their amazing lox sandwiches.

Other than that, it looks to be just a regular nice day. No baseball game but otherwise the usual. 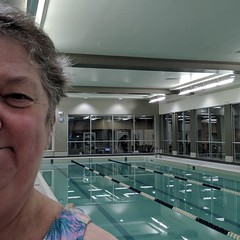 Just before I headed out, Instagram told me about McDonald's new donut sticks. Soooo... stop number 1 was a research mission. OMG. I have found THE NEW CRACK. They should actually be called beignet fries. Their flavor, weight, texture is all far more beignet than donut. But, actually, they could call them urine sticks and I'd still eat as many as my fat little hands could grab. They are heaven.

Then on to Amazon. They have, indeed, installed package lockers in that lobby and moved the package drop off to a far more convenient place and added packing materials so you don't even have to box up your return ahead of time. That's all great.

Not so great... to get your package out of the locker, you have to have a code that is only good for 15 minutes. There is 1 byte of cell service in that room a minute. They have wifi but it requires a password. Finally, I went outside but when I got back to the Get The Code thing, it said it had expired and I couldn't have another code for at least one minute. WTF??? I wait. 3 minutes. Finally I get another code. I go in and it says my package is available in the locker on the left. There are 9 lockers on the left. None have handles. I hear one of the doors pop open but none look open.

I do the code thing again. This time watching all 9 doors. It's the one at the bottom. I finally manage to get the fucking thing open and get my package just as a guy comes out to say 'oh I see you got it, I was going to ask if you wanted me to get it from the back.'

I explained the data problem and he said 'oh we have free wifi - Amazon Internet'... not so fast there, Amazon boy. I showed him how his free wifi was asking for a password. Ooops. It's not supposed to do that.

I did get a really nice free grocery bag out of the deal. So not the end of the world. And, if it worked correctly, it would be quite handy. Not as handy as their delivering the same day, but I can deal. I'm just glad the pickup/drop off place is so handy to me.

And I picked up a sandwich for lunch. And Zoey is a happy camper. She was waiting by her food bowl when I came in with the new cat food.

On with the day!

I just picked up the heater remote to turn on the TV. They are both black and the same shape and size. That should not be allowed.

I was 31 years old before I ever even saw a remote. I bought a BetaMax and it has a remote. It was not wireless. BE CAREFUL - THE CABLE!!

Most of them I do not use. I use my phone or Alexa. But even so, that's too many remotes.

Having said that, it does seem ridiculous to have to get up to preheat the oven...

That Holly Near and Kevin Bacon are first cousins. Their mothers are twin sisters! I had no idea.

In fact, truth be told, I actually hadn't even thought about Holly Near in a while. She was the voice of my early adulthood and I hung on her every word and every note she sang.

She was the subject of an American Masters episode that aired here last week. I just watched it ... twice. It was amazing to see her again and see videos of the past.

And man does she ever look good. Talk about aging well. She is exactly my age but wears it ever so much better.

It was a cool piece to see.
Collapse