I had a lovely swim. Mostly I had the pool to myself. And no need to hurry. It was nice.

Then on to Trader Joe's and then to Safeway. I had a list for each place and remembered to check the list. Gold star for me!

Then I stopped for a lox and bagel and came home and made coffee to go with. And that's where we find me now. Actually, I'm on the second cup of coffee and now just killing time. I need to get off my ass and put the groceries away.

Today I'm tracking the number of tissues I use in a day and the number of times I use the toilet. Old people and bodily functions - a natural pairing. While I was swimming, I counted how many times I got my mouth out of the water to breathe in a 30 second span. 30. I'm making homework inroads.

I noticed a lot of changes today on the way to the pool and back. Odd quirks of things. A car that has been parked across from me without ever being moved for several years - it does not even have license plates - today has a cable hanging from it's hood. Someone is charging up its battery. Wonder where it's going??

The restaurant on the corner that closed a couple of years ago, today has a fence around it. Originally they had grand plans for redoing the building but then nothing... until today. Action!!

Then coming home, I pass a corner that has forever - like years - been a giant pile of dirt with a big sign on it saying FREE FILL DIRT. Today was leveled and the sign was gone. Ch Ch Ch Ch anges...

The transportation folks are now saying they are shooting for Wednesday to open up the new interchange. This is going to be huge for my trips home from the pool. There's a Sounder (soccer) game in the stadium across the street on Wednesday night and they want it open for that. Me, too! Today was the first day I'd used the new entrance/freeway in the daylight. Most interesting.

There are still mounds of snow in places. Some of it disgustingly blackened. All if it looking pretty pitiful. One of my greatest memories of snow was the snow in Minnesota which never got ugly. Fresh snow hid whatever ugly might have been. Right up til June. I remember walking on dry pavement, in the sunshine, in shorts with between 4 inches of beautiful white snow on either side of the walk in June. I could not get over it.

But, here it is chilly and rainy and the snow piles are black and ugly down here and white and muddy in the hills.

It is also now noon and really I'm still on my ass drinking coffee. This will not do. I have tiny shit to glue which I cannot do until the groceries are all put away.

5 tissues so far and 5 visits to the toilet. 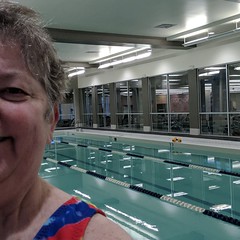