There is a shocking (to me) amount of snow hanging around. But, from my garage to the gym's garage and back, there was no slippery. There was also a surprising number of regulars missing from the wait-outside-for-the-gym-to-open crew. Schools are closed again today so that probably accounts for some of the missing.

But it was soooooo good to get back into the pool. So good. I had it completely to myself for the first 55 minutes. It was almost getting lonely.

The roads are still not completely open from the highway shut down before all the snow BUT I figured the way home wouldn't be real crowded today because of the school closure and the still some snow. So I swam a mile and took my time in the shower and I was right. No traffic at all coming home.

All in all, a perfectly lovely outing.

Normally, around here, Amazon offers same day shipping on a whole lotta goods. In fact, during the holidays, nearly all of their prime items were available for same day if you ordered in the morning. But, during the snow... and still today... nothing is offered same day. Also now, it is very rare to get delivery from any of the agnostic carriers. All their stuff is delivered by their own carriers. Except during snow. Their carriers were put to rest. I have several things on order. Some are arriving via USPS and some via UPS. None via Amazon's own system. Also, none since last Friday. Not surprising that they can turn their whole operation on a dime when needed, but kind of surprising that they do it.

I'm out of lunch food. And running short on eggs. So there may be a grocery outlet run today but also maybe not.

I might just go back to the cured meat deli and get another one of those sandwiches. I'll bet it won't be crowded today but I also suspect that today might be the last 'free' day.

Otherwise, no big pans. More bears for sure. But, no telling what else. 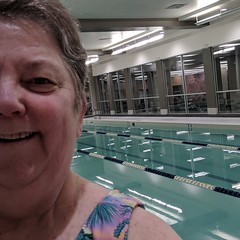 I inadvertently punctured my pinky finger just at the top of the nail bed with a yarn needle (meaning not sharp enough to pierce but plenty fine enough to bruise severely). It is a paper cut situation. The bruise is right in the spot I need to leverage for cutting out more bears. It's really pissing me off.

I need a heavy coat. I made a coat earlier this year that was plenty heavy but it turned out to be not practical at all because of the shape. Plus it looked really weird. Goodwill got it. Sorry, Goodwill. So I thought I'd make another but I could not find the fabric I wanted. In looking for the fabric I fell over a ready made coat that looked perfect. on Amazon with free return. So I ordered it and it's almost perfect. Really. Except. it's too small. it was the last one. it only came in one size. it really is otherwise perfect. I spent forever looking for one that was bigger and I liked even half as much. Then looked for fabric again. Finally I decided to keep the fucking coat. I can button it but it's a stretch. I looked at the construction and I think maybe I can fix it to fit better. Regardless, I'm keeping it.

UPS promised they would deliver my next tiny house kit today. Lying liars. I hope it comes tomorrow.

I got the final bit I needed to do my taxes today so I did them. Well, not true. I did the software thing to send to the CPA so he can do them. I'm finally in a 'same as last year' situation. I have almost nothing to deduct any more. My income does not vary any more. I'm just 'hit that button again, Sam' and spit out how much I owe this year. Hopefully, not so much. My goal is to get my estimated payments to equal the taxes I owe. And since last year, he knew how the 'new tax savings' were going to cost me more this year, we set the number correctly. I hope. (And, thankyoujesus for my CPA.)

Friday I find out the exact number of for the property tax bill.

Love spending money on these things... At least this will be my last gynormous bill until next December.

I think I'm going to have Trader Joe's Orange Chicken for dinner. It's my new favorite and since I know I can get to TJ's this weekend, it's safe to eat the last one (from the freezer). So I'm going to!
Collapse