It's Friday and everything is closing early on account of the snow forecast and I thought maybe, just maybe, I could sneak in a longer swim and still get home before noon. OR if I was wrong and the traffic was as bad as it has been, I'd just sit in it. Not like I had a brain surgery appointment or anything.

I figure it's going to be my last swim for a couple of days or more. Might as well make it a winner so I did.

Last night's twitter feed was hilarious. Picture after picture of empty grocery store shelves. And one of really long lines at Costco gas. But the one that got me to LOL was (Metropolitan Market is an oh so hipster grocery.)

At @MetMarket now. Looks like Super Bowl Sunday, but everyone is buying for 3-4 days. Just about out of #kale

OMG, my Pixelbook just got the most amazing feature. I can finally write and draw on PDF's!! All those knitting and crocheting patterns where checking off a row or adding notes has always been a PIA on the laptop, is now EASY PEASY! This is such a big deal in the world of me. YEAH!!

In the tiny world of me... my latest kit came with torn wallpaper. I wrote the seller to let them know. The seller wrote back that they were sending a replacement. I wrote back and told them not to - I really just wanted them to know, I didn't want a whole new kit. I suggested that I wouldn't mind getting a different kit.

And that's what they are sending me! I think it's this one which looks very cool.

I remembered to turn on the heater this morning as soon as I sat down with my coffee. Way better. This little ceramic heater does a great job of toasting up the room. My window blinds are thermal so the smart money would be to close them but, if I do that, I won't be able to see the snow. So NO closing of blinds in this room. There was already a little flurry of flakes but the rest will be here soon. They are saying big flakes by noon. 1 inch by 1 pm. 2 inches by 2 pm... cute trick, it will be interesting to see what actually happens.

Wait, what?? CNN just tweeted that Seattle averages 6.8 inches of snow a year. Not the Seattle I live in. We average maybe an inch. Maybe. a year. CNN is in Atlanta. They probably can't even find Seattle on the map.

There's a woman who's normally in the crowd with me waiting for the gym to open on weekday mornings. She's a florist in a little shop not far from the gym. She noted this morning in the snow chatter that she was just hoping the roads were clear for Valentine's Day. I had never actually thought about it but holy crap. Your business's biggest day ruined by icy roads. There's stress level for you. So, I'm collecting all my spare good thoughts for her for next Thursday. 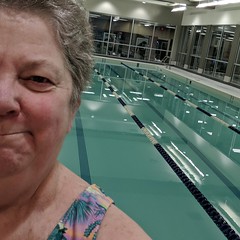 I made a giant batch of spaghetti and it is meh. Not bad but not heaven. And I'm not sure what to add to it to make it heaven. Oh well.

It feels like this snow is going backwards. My terrace faces east and most weather - rain, wind and the last snow - comes from the north to the south if it'snot just straight down. Today is going from the south to the north. Are they doing it wrong?

It's now 1:55 and Google traffic maps + Twitter says everyone is going home RIGHT NOW. The streets are clogged and the busses are full.

I finished the yellow cabinet. And I'm happy with it. The more of these tiny things I do, the smarter I get at doing them so the doing of them is not nearly as frustrating as it was. I'm enjoying this kit most of all. 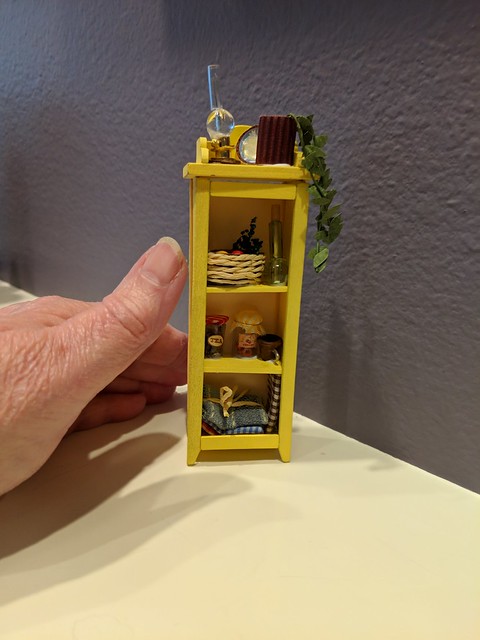