It was snowing just a little when I went to bed. None of it was sticking to the ground. And the forecast said it was going to stop about 1 am.

So, I'm actually kind of impressed that I stopped to look when I got up this morning before I put on my swimsuit... Yikes! Snow all over the boats parked in the stadium parking lot after the boat show. Snow on the road.

NFW was I going to attempt the hilly bridge to the pool. I didn't get a whole lot of extra sleep but enough. Finally I got up and turned on the TV to get snow reports.

It's still coming down at a lovely clip. I wish it would hurry up and be daylight so I could actually see it.

My breakfast egg 'cake' was delicious. Nuked it for 30 seconds and then plopped it in the center of a toasted English muffin. Success.

I think I'm going to get dressed and get ready and then have another cup of coffee and wait for daylight. Then I'm going to go snow walk!

Just read this on Twitter from the Seattle Weather Blog:

Yeah. We've waited long enough. It's just getting light now... I'd say another 20 minutes and I'll be crunchin' snow! on my own street! 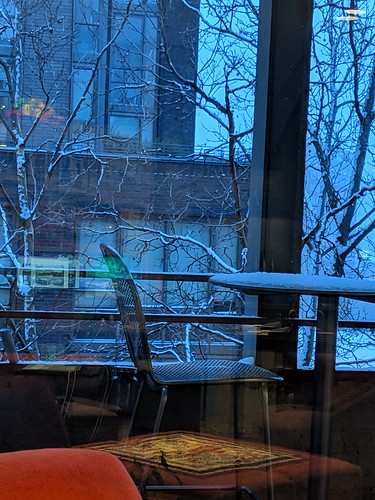 That's an Uber Rent A Bike, the ready for tear down viaduct, the mechanics of the new tunnel (the lights in there rotate through colors continuously), moi, the boats in the parking lot from my terrace and You Know Who.

My foray out into the flakes was short. It was so windy. The wind chill made it not as much fun as it could have been. Or, said another way... FUCK IT WAS COLD! I walked over to the new interchange to see what I could see. Turns out, it's confusing. I had to come home and restudy the maps to figure it out. They made new roads/access/ramps and reconnected old ones and some aren't open yet and the signs are either not finished or just flat out confusing.

Once I try it out, it will be fine but at least now I know that my original plan to get from here to the pool was wrong. Well, not wrong, but certainly not at all the most straightforward way. I get it now. Or at least enough to get to the pool.

And then I came home. I think the rest of this snow storm will be enjoyed from my living room.

I'm making honey garlic ribs in the slow cooker. My guess is that they will either be spectacular or inedible. The ribs were on sale and I had all the other ingredients on hand so outlay $6. I have a backup for dinner if fail.

The Winter Weather Advisory has now been extended to 1 pm. I think I'll go make some bears.

I hate to look a gift flake in the nose but... as much as I love snow, this particular snow was kind of hard to love. It wasn't beautiful. It snowed for hours and hours and hours and I'll bet we didn't even get an inch here on my street. It just closed everything. Places that opened, closed early.

I just called the gym and they were open (at least one gym near there did not open at all) and a very cheery guy said that they would be open at the regular time tomorrow.

Other local peops noted that the big tall bridge I have to go over to get there was all outfitted for slick this morning. They had salted and/or whatever to make it dry and unslippery overnight and the people who were on it even early this morning said it was easy going so I'm expecting the same.

I've had too many non swim days. I'm ready to get back into the water! ut, I did make bears and crocheted octagons and my ribs are going to make a fine dinner so day not wasted. But, still. I'm ready for a regular day. My tracker says 2500 steps is not enough steps and I agree.
Collapse