The day got off to a great start with a great swim. The usual Saturday people who annoy me were totally missing. As were, actually, most everyone. I never even had to share a lane and for a lot of my swim, I didn't have to share the pool!

Between my shower and home, I got a text from Frank about a trip to find the new massively stuffed Oreos. He said he's be ready to go before 11 so I hustled home and scrambled up some eggs to go with my coffee and got ready.

One block over they were getting ready to open up the new tunnel for walkers to explore. They first had a fun run/walk that drew massie crowds. I was afraid Frank wouldn't be able to get here to pick me up.

But he did and we headed down to SouthCenter to the Target there that had told him on the phone that they had the goods. That Target has been there for 30 years but they have totally redone the insides. It feels more like a JC Penny's than a Target in front. But we made a beeline for the back/food.

No massively stuffed limited edition Oreos. Just an empty spot on the shelves where they should be. Sigh. We were nearly out of there when Frank decided to go back and ask. He finally found a stock person who did some digging of her own and finally turned out a case of the beauties. VICTORY!

Then we went on to Ikea. Ikea on a Saturday. We agreed that the idea was not terribly bright. It was packed to the gills. Walking around wasn't horrible though but getting something to eat was not possible - the line was away too long. However, we discovered that the checkout lines were even longer. They were, actually torture but we made it though and back to the car on our last legs.

Frank, then asked if I was interested in stopping at Popeyes.

So... it's time to go on record. IF ever ever ever in my life I am not interested in stopping at Popeye's - amy time of the night or day, it will be because I am dead. And probably dead for awhile because just after I die, I might want to pack in a 3 piece, mild, dark meat only, for the journey.

And the trip to Popeyes paid off handsomely because since either of us was there last, they built a Sonic next door!!! That's some tasty real estate there. Note to self, make sure nursing home is in walking distance of that corner.

By the time I got home I was starving. I truly am embarrassed at the voraciousness with which I inhaled that fried chicken. But, sooooooooo good. Really.

Twitter is full of reports about how crowded and out of control the tunnel/viaduct walk program has gotten. A couple of years ago they opened a new suspension bridge and opened it up for walkers the weekend before they opened it to cars. They grossly misjudged the number of people and were not at all prepared for the hoards they actually got. This time they said they had learned from those errors but, apparently, not. They had a plan with tickets and schedules that according to Twitter they abandoned after the first hour. I'm perfectly fine with not having even tried to go.

What a fun day. 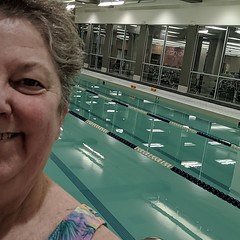