I only swam for 45 minutes this morning. Quick shower and I was on the road by 5:57 and missed the bumper to bumper. Yeah! I think tomorrow will be a day off. My ears are feeling prickly and I do NOT want that ear problem I had for all of October to come back. Plus traffic. So day off tomorrow. I think.

Today... regular day. I have one car errand that I want to do but can't until after 10 and otherwise, a lovely day at home. Some sewing.

Maybe lots of sewing. I have new project in mind that will be fun and clear out some storage. I hope.

I'm trying out a new (to me) slow cooker recipe. I'm really not using my Instant Pot any more. I'm not ready to give it up but I may move it to the terrace storage closet for a cleaner looking counter. Before, I do, however, I thought I'd give this recipe a try. It's a 6 hour one so not quite time to get it going yet.

I think I'll get up, get dressed, and get crackin' on one thing or another. It's not mid-west cold but it is chilly here so it's either turn on the heater or move this giant ass. I'm going with door number 2 for right now. 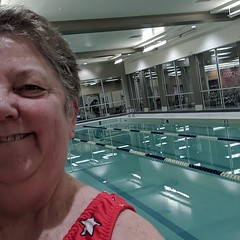 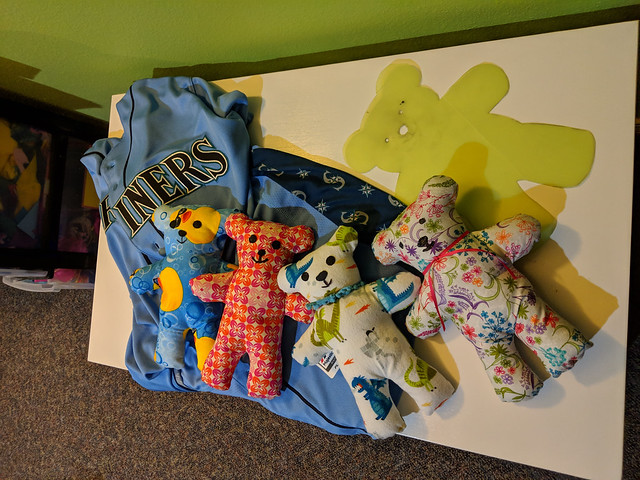 First I took the Official Spring Training Jersey that I won off the new pitcher the other night and added some side panels so it will fit over my ample ass. I used the fabric from some pajama pants they gave out as swag last year. Now I'm all set. (I would like to note that the fabric and the badges/labels on official major league stuff is really junky. The PJ's fabric isn't much better. BUT, I will look fabulous!)

Then I made some teddy bears. I used to knit teddy bears by the dozens and make dolls by the double dozens and then I stopped. The place I gave them all to closed down and I never found another place as easy and fun as that one for donations. And I wanted to knit and sew other things and crochet things.

I'm dicking around with face elements. I think I like the felt but the one on the far right is painted and that sure is easy. The paint is really a paint/glue and it takes a long time to dry so I'm reserving judgment.

My plan is to cut out a bunch o' bears and maybe even do the faces ahead of time and then assemble and stuff as the spirit moves - in between stuff or maybe in batches... I have no plans for them. Maybe Goodwill. Maybe Mary's Place (shelter for families). No one is begging and I'm not at all interested in calling around looking for places to take them so we'll see what's happening when the volume hits Do Something.

But, I like them. A lot. So there will be more.

I just remembered about the cheesey chicken that's in the Instant Pot. I need to formulate a backup in case it sucks. Scratch that. I just peeked. It's going to be fine.

Now I think I'll watch a little TV and do a little crocheting.
Collapse