ljtourist to the Mariners Premium Partner event and it was fabulous. It was a fancy dancy reception and it was really fancy dancy.

They dressed up the lower level of the stadium - the area where the players hang - and filled it with booze and scrumptious hors d'oeurves. They had tons of staff on board who had clearly been given the instructions of "make these people feel like the most important, nicest people that you've been waiting all year to see and serve" and the staff followed that direction perfectly.

Here are the ice baseball that they served in a special cocktail. 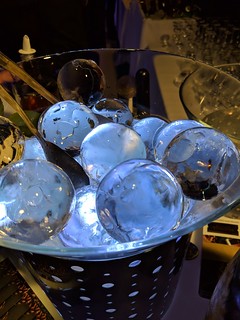 The name of the facility recently changed from the name it's been known by for 20 years - Safeco Field to T-Mobile Park. The management and staff apparently have a penalty jar that was $1 for each time someone said Safeco instead of T-Mobile but it was not effective until they raised the fine to $10. Still, it was clear in the presentations that that they are going to need a bigger jar.

This was a knit fabric that I'd love to get my hands on. Currently the Mariners do not license any logo'd fabric that is knit. Much to my sewing fingers' dismay. 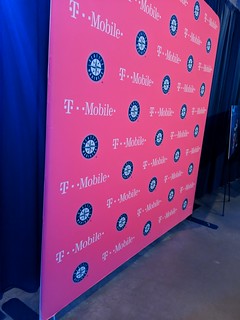 Drinks in hand and munchies on the way, we wandered down the hall to see the sights. The training room. The workout room. The indoor batting cage! They were allowing - encouraging - everyone to step in and try their hand. We declined but it was fun to watch. 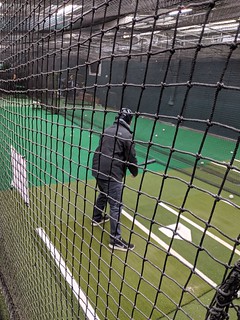 This is the stairway that the players use to get to the dugout/field. So cool. 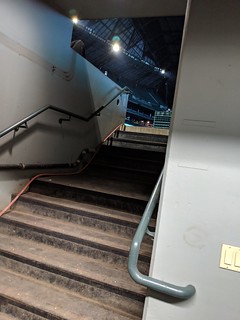 Then we went into the locker room. They had players and management there mingling with us - more booze. More food. Gonzales is a pitcher that I actually know for Instagram!  Here he's talking to Rick Rizz who has been broadcasting Mariner games for 34 years. BUT, I knew him from before that and got to actually meet him last night.  In the late 70's he was a braodcaster for the Southern (minor) league Memphis Chicks and he would come with them to Crockett Park where I was a season ticket holder for the Charlotte O's. He talks about Crockett Park sometimes during a Mariner game and I wanted to tell him I was there. He remembered players I didn't and vice versa. It was pretty fun.

While I was talking to him, Frank wandered off and chatted up another guy - John Statton who, unbeknownst to Frank is the Chairman of the Board. Yep we were hobknobbin' fer sure. 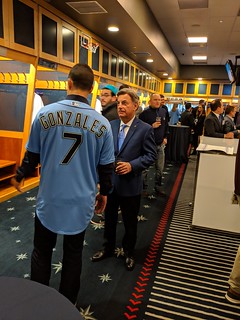 We wandered from there into the dining room which had a full on buffet of good food.

Then we went into the presentation which was fun and nice and interesting. They had 5 players - 3 new (to us) and 2 returning. They answered questions from Rick (who acted as MC) and the audience. It was very nicely done.

At the end, they gave away their jerseys - these are the new Mariner Spring Training jerseys - via lottery.  And I got one!!!  I got the jersey of the second guy from the left. Justus Sheffield. He's a pticher we got over the winter from the Yankees. 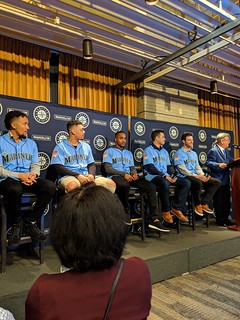 It's a real live regulation jersey and he took it off, signed it and gave it to me!! 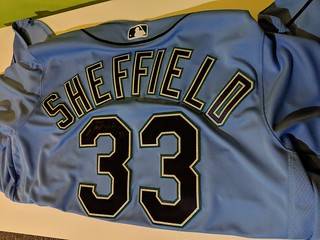 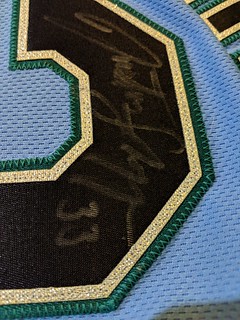 All in all it was a very very fun, evening.

I did not get home real late but I was still spent so I turned off the alarm and figured if I woke up, I'd swim if not, no biggie.  I opened my eyes at 4:30 but before I could finish the 'swim or no swim?' thought, I was back to sleep til 7.  And, reading the twitter traffic report, sounds like my decision was a wise one.

Today is laundry day. For some reason, no laundry has been done here in quite a while. If I don't do it today, tomorrow will be Naked Ass day as I'm wearing my last pair of clean pants.

A couple of years ago, I had a string of solar powered fairie lights that I strung along my balcony railing. Until I was told by the building management that that was against the HOA rules to have lights like that visible from the street except for something like 10 days before a holiday and 5 days after.

Last night, we drove by the front of this building after dark and I noticed no fewer than 5 balconies with lights strung on them. This morning it's all I can to do to keep from sending the HOA a whiny note about why they are allowed to have lights and I'm not.

Only. Why. What good would that accomplish. It would be petty and mean. Those lights aren't hurting me one bit. It's not like a neighbor cooking something stinky on their terrace just below mine (so glad when he moved out) or one with a dog that won't quit yapping (I think that's ended as well). So, while my sense of justice and fairness is bruised, I'm still taking the high road on this one. I'll save the scraping for when I need it.

Time now to get glueing some more shit to stuff.

The place I've been going to for haircuts for a couple of decades is also the place that made me swear off going anywhere but my own bathroom for haircuts. The back of my hair which I butchered is looking a little better. I briefly thought about taking it in to have someone just even out the roughage. But, then decided that nope. I was done with hair cutting places. Then this morning, I got an email from the hair cutting place. They want me back. 20% off. I'm semi tempted...
just so I could say 'see what your loud music did to me????' but, no. No, thanks. At least, not yet.

I'm in another phase of the miniature project where it's glue/wait/glue/wait/glue... So I have a half a bed, a semi lamp, an almost chair, and curtains nearly ready to hang. Plus other stuff in progress. But, I did get the desk done.y. 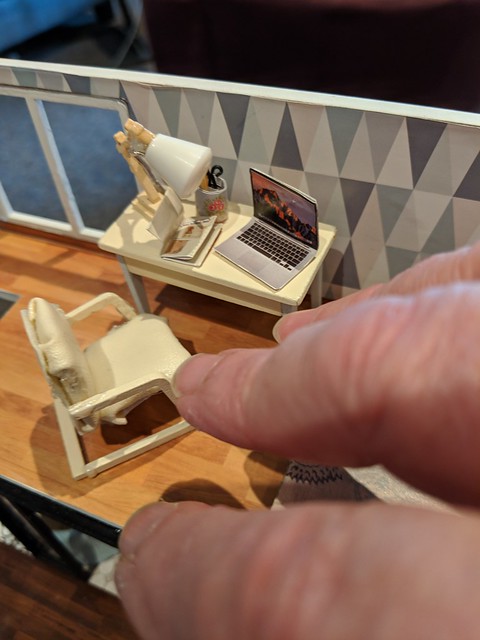 My bed is covered in clean clothes. I need to go fold everything and put it away.

We have a measles outbreak going on here in Washington state. It's like the olden days but different. We did not have fancy vaccinations back in the day. And there was a bit of a different attitude especially about measles (german and red), chickenpox and mumps.

This sounds totally not real today but, trust me, it was. When a kid got one of the above, that kid's mother would throw a party and all the healthy kids were invited. In hopes they would catch the disease.

I'm serious. Old people, back me up here.

The idea was that kids bounce back from these things way more easily and if you get it as a kid, you were immune for life. Particularly Mumps was thought to make men sterile and German measles did really bad things to unborn children.

We had no vaccines so we made our own. Germ parties.

Hard to believe today. Of course, it's also hard to believe that we have a measles outbreak here. And it's because people won't vaccinate their kids. Maybe they are planning germ parties.
Collapse