Again I cut my swim short and left the gym at 6:02 and, according to twitter, just missed the major backup which, at least this week, has lasted until 10:30. But, in order to leave by 6:02, I have to rush, rush, rush and it's really not that much fun. Plus, I'm used to swimming a little over an hour. 45 minutes feels like I got cheated.

They are still saying that they are shooting for having the tunnel and the roads surrounding it open on Monday, Feb. 4. No guarantee but that's what they are hoping for. It can't come soon enough for me.

One of the people I follow on Instagram has a little 4 year old girl who had a nasty bout of the flu recently and she said "The flut [sic] is bad for my happy." These road closures are bad for my happy.

I may take tomorrow off. Depending how I feel after my hot date tonight.

The Mariners are having their 'premier' ticket holders in for a bit of a January 'due'. And I get to bring a plus one. So

ljtourist and I are going to hang with the baseballs tonight. They set out really nice 'heavy' hors d'oeurves and cocktails that you pick up as you wander the underbelly of the stadium. You get to see all the places the players hang out. It's really fun and interesting.

Then they call us all together (there were about 200 of us last year) and there's a little program where some players, staff and one of the broadcasters talk about the season to come.

The Mariners have traded away all but a couple of their players so the team is a giant, not hopeful, question mark. So not good news BUT Edgar making the Hall of Fame should brighten the mood considerably.

It was a fun event last year and I'm thinking it will be again tonight.

Before then there is plenty to do. A lot more glueing of tiny shit. I am getting kind of wearing with having this big mess in my living room. My previous organizations did not work in terms of keeping it more tidy.

Today's goals are to get the bedroom floor/kitchen and bath ceiling installed and the 'office' placed and glued. And then clean up entirely. I need to either get it really tidy or put it away for a bit of a breather. Maybe do some sewing for a change of pace. At least that mess is in its own room and mostly out of sight.

Today I also need to make some cornbread today. I finally got my hands on the Martha White mix that you cannot get out here in the wild west. It calls for buttermilk which, of course, I cannot find without a very out of the way trip to Safeway which I'm too lazy for. So I'll make faux buttermilk. I also will have to use oil rather than Crisco. Clearly I need to get to Safeway. But not today.

Yesterday, I walked up the street to the new 85°C Bakery Café. The line was not out the door but it was pretty crowded inside. Lots of different pastries and baked things. I got a variety of stuff. Some good. Some bad. Some blah and a couple of OH MY That's Delish! I'm looking forward to going back when it's not so crowded.

Ok, second cup of coffee gone. Time to get my giant ass in gear. 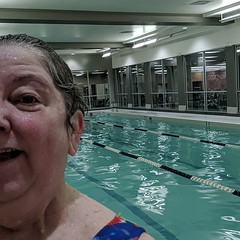 The bedroom floor /kitchen and bathroom ceiling is in. I was worried that it wouldn't fit but it fit fine. And all the electrical worked as expected. 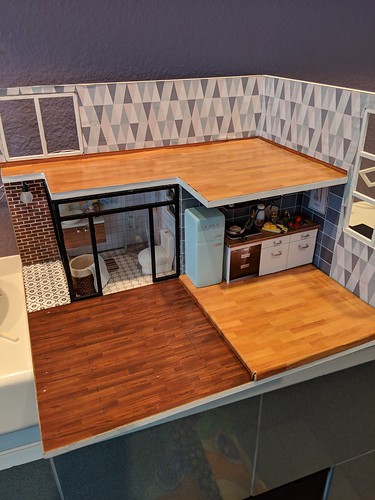 Then I broke a tiny, very hard to fix piece of the desk lamp but I think I got it fixed. And glued the desk chair - which, by the way, no one should sit in, they will fall right out.

Then I cleaned up and organized the gynormous mess. I actually do feel better about it all now. 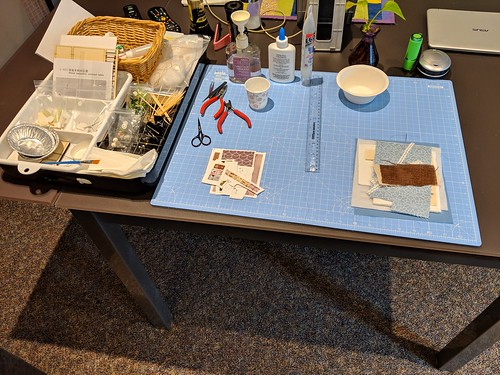 Whew. I don't think I'll put it away. I think I'm at a stage now where I can still do work but keep it tidy. I will put it all away for the house cleaner next Wednesday, tho.

Across the street is an apartment and in that apartment is a fabulous cat tree that I want. I finally was able to get a photo of it. (And, can we take a minute to appreciate the zoom talent of the Pixel 3... this is across a two lane road, two sidewalks a 40 foot terrace and, probably, 5 feet into their apartment! Wow.)

It's a bowl (in photo it's a bowl full of cat) on a scratching post that is probably 4 feet high. 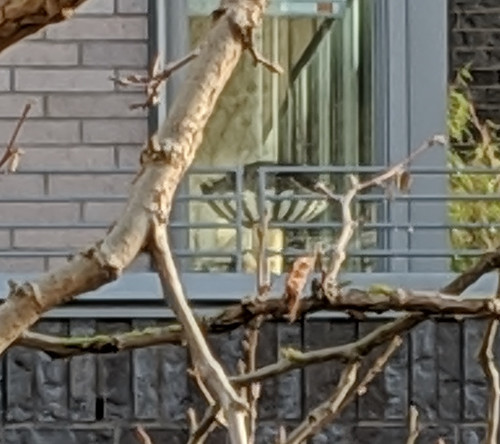 I'm waiting for the cornbread to cool a bit before I cut into to it for a taste test. All the cornbread out here is just too sweet. I love a good corn muffin but when I want cornbread I don't want sweet. Finger's crossed. 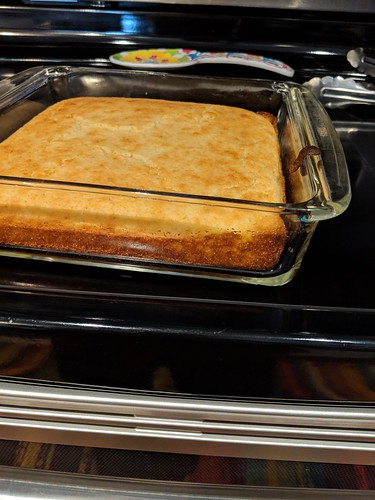 Ooops just fell down the Etsy Rabbit Hole. This guy appears to make to order and have something very close to the cat tree across the street.

I sent him a note asking about replacement posts and wood color.

Now I'm going to have to make some chili to go with it.
Collapse