Turns out that, as expected, the traffic in this, the second week of at least three weeks of traffic hell is more hellish than the first week. Yesterday was a holiday high. Today was the worst yet. I even cut my swim short and still got caught in bumper to bumper stand still frustration.

What does it matter to me? Nothing at all. So my coffee is delayed 30 minutes. Big fucking deal. But, sitting in the dark on the bridge stuck between three gynormous single occupancy SUV's while others try to skip the line and then break in, just kind of stretches my good will, ya know?

We have at least 9 more days of this which seems like a very long time right now. Where the fuck did I put that traffic zen?

My hair is beginning to show signs of normalcy from my egregious shearing of last week (was it only last week???). Thankgod it was in the back that grows fast. People staring at the back of my head will still waste brain cells trying to figure out whatthefuck happened but those passing by might not even notice. Progress.

I may give the Grocery Outlet trip another try this morning. Maybe. But first, I am going to get going on a very teensy tiny bathroom 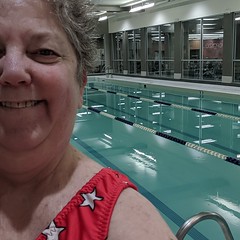