I took the new suit out this morning for its maiden voyage. It did great. I tweaked the pattern to give me more arm room in front and it worked perfectly. It was luxurious to swim as long as I wanted without having to worry about traffic on the road or in the pool. I did 1,800 yards before I ran out of steam.

A guy who teaches some classes there told me this morning that he's trying to get them to let him teach an aqua fit class on Saturday mornings at 9. Every other pool in town has an aqua fit class on Saturdays at 9. I like to swim an hour or more. If the gym does not open til 8, it's at least 8:05 or later by the time I get into the water and a class that starts at 9 likes to take 5 minutes or more removing the lane lines and getting set up. So a class that starts at 9 fucks up my Saturday swim.

But, you know what? BFD. So what if I have to cut my swim short. The world will not end. It's not like my Olympic chances will be ruined. Worst case my journal readers will be so annoyed at my whining that they won't want to read anything I write ever again.

I stopped off at Trader Joe's to stock up on stuff I don't need: food version and then came home and had eggs over the rest of the hash browns my brother made when he was here last weekend. YUM!

I think after I clean up the kitchen, I'll set up the next miniature room goods and do a little creatin'. 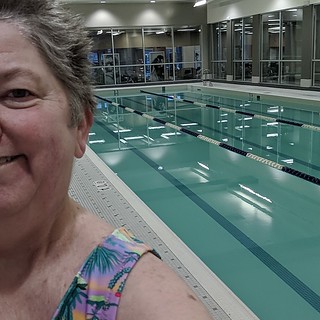