The 5 am regulars at the gym welcomed me back into the fold. Only, really, like the silent warriors they are, nothing was mentioned about my missing 3 full days. We we got to the pool, we found split pea soup.

My buddy Matt was there and we decided to chance it. As I was swimming I thought 'well, if it were a lake or the ocean, it wouldn't be clear...' But then I realized that all the fish had died, too. ugh. Just gross.

When we were done and leaving Matt quipped 'see you in the ER!' hahaha I am going to feel so stupid if I get sick from that pool.

Then I went to sit in traffic. Normally, I'm showered, dressed and on the road about 6:15. And that was the case today. But, normally at 6:15, the road is pretty darned clear. Today it was bumper to bumper for a good third of the trip. The entire trip took me about 3 times longer than usual.

There are several sets of railroad tracks between the gym and home. Today I had just cleared the final one when a freight train came by and stopped. The stop was longer than usual but at least I was on the good side of it. When I got home, I discovered on twitter that the stop was WAY longer than normal and had gummed up the works causing a backup that started even before the gym.

So my swim slimy and my ride home a lengthy mess but I did manage to dodge a pretty big bullet. Not so bad.

And, out of the shower, I managed to finger style my wet hair so that the back of the head situation isn't as glaring. I hope.

Today is house cleaner day. I'm guess she will be late and blame it on traffic. Maybe not. I have a load of stuff to take to Goodwill and then I'm not sure what I'll do to kill time til she's done. Maybe Trader Joe's. Maybe the book store. A local bus driver has written a book of essays about his route (Route 7) that I want to read. I also want to support the author so I'm happy to buy it. I just wish it was Kindlized. But, it's not. So book store it is.

Then home to a clean house. The laundry all got done yesterday so today I may sew or I may miniature or I may just watch junk tv and crochet. I don't have to decide now.

I do think I've made a dining chair decision. No chairs at all. I currently have two chairs that are uncomfortable. And, get in the way - they are too tall to see the TV over as well. So my new plan is to get rid of them and replace them with ottomans. Ottomen? I have two ottomans there now - 2 chairs, 2 ottomans. And when it's just me, I use one of the ottomans to sit on. So why not just get some more? They don't make the ones I have any more but I found a nice version - storage and casters and ordered one. If it works like I think it should, I'll order another so at least two will match.

Time to get crackin'! 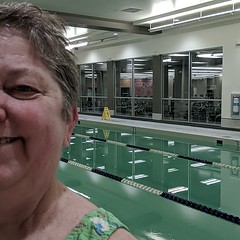 My two IKEA dining chairs went home with the house cleaner. I really like that they aren't here. It makes the room so much bigger.

I spent lots of time today at that table working on my miniature room. I'm not going to love the finished product but I have learned so much. I know I will love the second one. I plan on finishing the first but probably it will have a short life.

It's 7 pm and I just had a wild hair to call the gym about the pool. Sure enough they apparently closed it after I was gone this morning and don't intend to open it until at least tomorrow. I'll call tomorrow mid-morning and get an update. But, I'm not going to go get up at 4:30 and fight that traffic for no swim. Soooooo glad I called.

Ordinarily in this situation, I'd just pivot to the LA Fitness in the Ballard neighborhood north of here but in the current traffic/road closed situation now, NFW. Ballard takes me 20 minutes to get to with no traffic and it would probably take me a good hour or more in this mess we have now.

My Plan C pool, normally open on Thursday mornings and in a location I actually could get to easily, is closed for maintenance til May.

Swims are not plentiful this month. Sigh.
Collapse