solteronita is having the most simple friendzy yet.

Why not join and spread the word?

First of all, I slept in today. I woke up at the usual time and had 2 second debate - swim? no swim? No swim won and I went back to sleep for 2 and a half more hours. It was nice then and I'm really feeling the benefit now 12 hour later.

My brother wanted to try Impossible Burgers and found several places in Seattle that serve them. One of those places overlapped with Places I Want To Try. So we went to Trace - the restaurant in the W Hotel downtown.

The Impossible burgers were an interesting experiment. My brother liked them better than I did. The texture was close but the taste was off. But the rest of the food was great and the fries were outstanding and the staff was really really sharp, nice and fun.

The restaurant is next door to the downtown library which, in Seattle, is a BFD. It was opened in 2004 (they tore down the old library and built the new one on the same spot). I had been in there many times but not in many years. The building is architecturally important. I'm not wild about the outside but I'd totally forgotten how marvelous the inside is. Plus, I'd never down the circular walk. You go to the 10th floor and follow the circular path around the building going by all the stacks down to the four floors. It's wonderful. You have marvelous views of the outside on one side and a great glimpse at the massive collection of the printed word on the other.

We stopped and looked as we went, at various books and sections of the collections. It was just thoroughly wonderful.

Then we walked home. My feet have had quite enough of this walking business but, in truth, my tracker is underwhelmed. 7,386 as I type this. No swimming really annoys it.

Also today we pulled the TV assemblage away and got back there and dusted and cleaned and picked up cat toys and reorganized all the cables and moved the Roku speakers over to the side of the room where I sit so that now I can hear even more clearly and only have to have the volume at 2 (instead of 25 and 30 before).

Then this afternoon Zoey crawled into her now heated cat bed and I couldn't tell if she was in there so I wired it up with light. I was afraid she wouldn't like it but she's apparently fine with it. 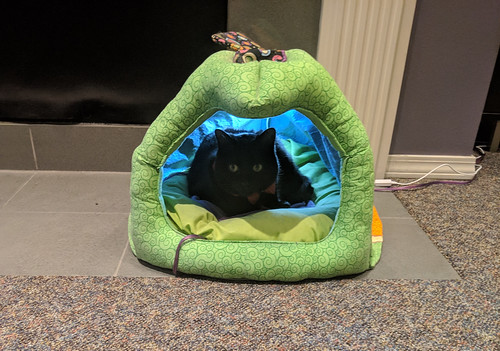 Tonight we are going back to the omakase bar at Mashiko in West Seattle. Our reservations are for 7:30 so by that time, hopefully, the traffic will be maybe doable. We've done omakase there twice now but he wants to go again so okdokey!

And a final note... I did some trimming of my hair the other day and have had a series of excellent hair days. I'm so delighted that I decided to change to the Hair Cutting Salon of Me. No stupid chit chat. No appointment necessary. No charge. It's a hair dream.

Seattle has a state highway running through town along the waterfront that is lifted up in a viaduct. That viaduct closes down tonight and will be demolished.

The closure was set for 10 pm tonight.

My brother and I finished up our absolutely fun and delicious omakase sushi dinner. (It was great fun and tasted great too... )

We were coming home from West Seattle, when in the middle of the bridge we hit the backup of cars trying to get onto the viaduct one last time. It was 9:40 and the parade had begun. 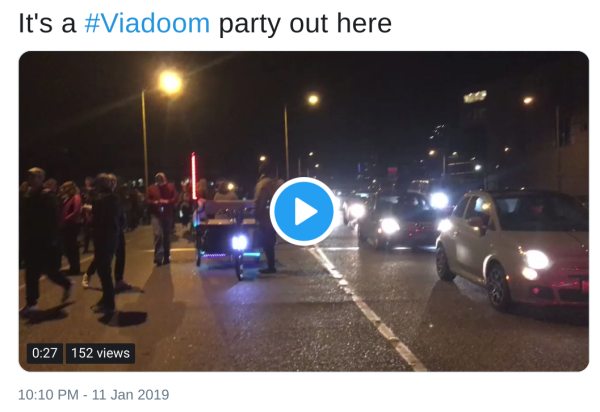 Even now here in my living room I can hear honking and helicopters and partying. Oh now there are fireworks. Wild. But, past my bedtime.
Collapse