I ended up taking the light rail out to the airport which was fine. He got here with no problems and so far, we've had a great visit.

Last night we braved rush hour/road closure traffic to go eat at the new restaurant that everyone is raving about in Ballard. We now do not have to do that again. The restaurant was pretty. The writer of the menu is clearly talented. It was mainly small dishes and one, out of the six we tried, was good and interesting. The rest ranged from ok to WTF??? And the server we had was an even mix of I Don't Give A Shit and Huh?

I went to sleep undecided about swimming and woke up only 8 minutes after the alarm would have gone off so I got up and went for a swim. I only did 1,400 yards but it was good and fun. When I got home, my brother was up so we had coffee and then went to 13 Coins for breakfast. Yummmmmmy.

Our waiter had the tiniest manbun ever and was obviously working his solicitations to the bone for tips. My brother noted that if we could have poured last night's server and this morning's into a blender, we'd have the perfect waiter.

No clue what we're going to do today but it will be fun, I know that. 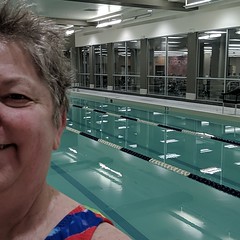 Tonight we went to an old old restaurant in the International District - Tae Tung. I've always known about it but never gone. It is as run down and shabby as last night's place was bright and shiny. But the food was amazing. I mean fabulous in every way. So delicious. It has officially ruined me for all other Chinese restaurants.

Before that we went to the Space Needle which was fun. I had not been up there since 1991 and they are finishing a major renovation. It was really neat and fun.

They take your picture like all tourist places BUT they do it digitally and free. 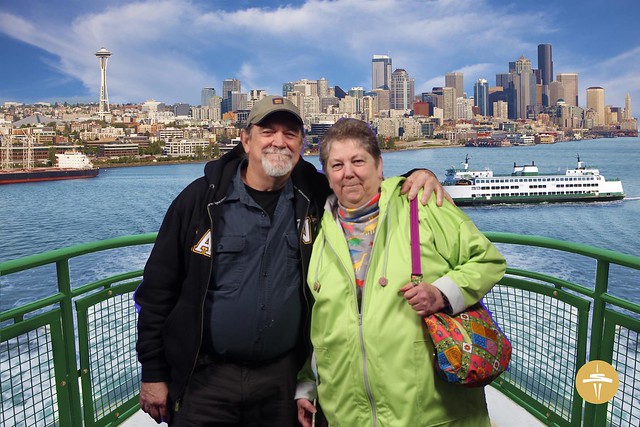 We had a lovely time in the massive gift shop. They have done a great job of assembling it but could stand to spend some effort in helping the clerks understand how to staff a retail operation.

We rode back to town on the monorail and then walked home. We did a bunch of house things on my list. Right now my watch says I've done 19465 steps. My feet agree. It was a really nice day but I'm beat. 'night!
Collapse