At 2:30 am my phone rang. I don't put it on silent but it rings maybe 3 times a month and last night was the first time I ever remember it ringing in the middle of the night. It was the power company telling me the power was out. Which it was not. I went right back to sleep.

Turns out, however, it was out in many many places all over the city. Including the gym/pool. When I got up, the outage map said that the pool would not be restored until 9 am. So no swimming. Over the course of the next hour, I got fine with that. Weekend swimming is not my favorite anyway. I can just stay inside here with no reason to even get dressed.

And then I checked the outage map just now (7 am) and, it appears the power is back on at the pool. So I had a little debate and decided to go with Plan A. I'm going to stay here and do laundry and watch TV and make little stuff and crochet and read more of the new book I started last night, which so far, is pretty darned engaging. (The Safest Lies by Megan Miranda)

While my brother is here, swimming will be a day to day adventure. Then, after he goes, I can get back into the rhythm. Back into the swim swing. 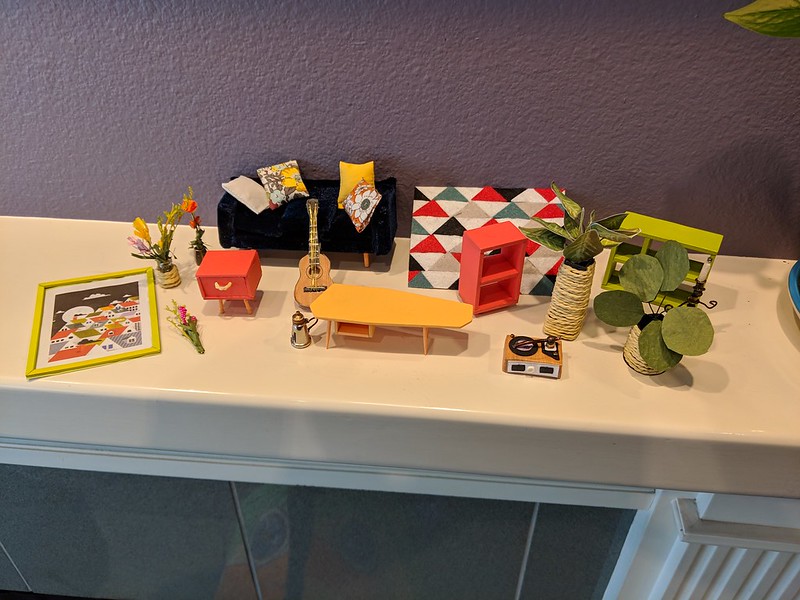 This tiny shit building stuff is infectious. I pick up one thing to glue so I can do other stuff while that one thing dries and then next thing I know, it's 2 hours later and a whole pile o' shit is now glued and drying.

And my fingers are a mess. I was using some cheap white glue which glued fine but smelled. After a while I couldn't stand the stink of it so I switched to a kind of latex fabric glue which works fine. No smell but gets all over me and, unlike white glue, does not come off really easily.

I think, if/when I do another one of these, it will be after some glue shopping. I'll be both sniffing and looking at dispenser options. The latex comes with a nice fine, nozzle which is handy but not perfect...

I'm working towards a natural stopping place sometime on Monday so I can put it all away and clear off the table for my brother's visit. I think I'll pretty much have all the furnishings and accoutrements done and be down to the walls, floor, window, lighting...

The laundry is done and folded and put away. At least I do not feel like I have wasted my no swim morning.

I've also paired down my LJ list and organized it into two groups. I'm not big on seeing the same memes/questions/answers over and over again so I put the people who mainly use their journals for quizzes and memes and lists and lengthy photo essays into one group and left those write about their day to day lives and thoughts in the default. I can easily monitor each feed and am more likely now to read everyone's entries more closely now that they are separated.

There were/are apparently lights out all over Seattle. We were very lucky this time here in this neighborhood!

I've always joked that the reason I swim is to have a valid excuse for sitting on my ass for the rest of the day. Turns out, that's pretty much the truth.

I'm just no good at free lance moving. I'm too lazy to go do stuff. My mind is perfectly fine with sitting here watching TV or listening to stuff and crocheting or making tiny shit. My body, however, is more appreciative of my moving. I'm ok with one day of doing absolutely nothing - less than 2,000 steps when I usually have more than 10,000. But only very once in a while. It's a good reminder. Next time I get lazy, I will remember.

And, I am really looking forward to getting to that pool tomorrow!
Collapse