poliphilo pointed out this morning, this time of year, every day feels like Sunday. But my new pill dispenser told me right off the bat that it is Monday but remembering that is an uphill climb.

The pool was packed this morning. It was full of weekend walkers. There is one woman who comes on Saturdays who is just a mean bitch. She's a walker and she does not believe she should ever have to share a lane. And she's pretty unkind about it. This is a 3 lane pool. Not one of those three lanes is marked Prima Donnas Only.

At one point all the lanes were full, even the bitch's, when another regular came in. I offered to share my half lane with her and the guy in the other half suggested we circle swim. The guy in my lane is really really fast and the woman joining us is pretty fast and I'm turtle slow but happy to share. We made it work and it kinda turned into a fun game.

I am home now and in until tomorrow when I'll go for my Christmas swim.

The apartment across the way - the ones who just moved in - have been having a house party since yesterday. It's fun to watch action.

I discovered a bunch of movies that I had saved on my bedroom TiVo this morning. Turns out I just don't even turn that set on except during baseball season any more. I used to watch the 10 pm news on it but now I'm usually asleep by then. So it just doesn't get turned on. My old TiVo is attached to the TV and I use it for storage. Stuff I want to save and/or movies I haven't seen yet but might want to. I'd forgotten there were so any good ones there. Nice find in during this time of barren TV.

Plus last night I found a quirky little series on Acorn called Indian Doctor. It's odd but compelling.

Oh! Breaking news: My KickStarter bone conduction headphones just arrived and they are about $200 better than I thought they would be. I am so delighted. I cannot wait to give them their inaugural swim! What a delightful Christmas surprise.

Ah man, it's already noon. I hate not being able to swim til late. It just eats up half the day. Tomorrow will be worse since I can't get in til 9. Oh well. Wednesday-Friday will be regular. I can live til then.

Oh and no swim selfie. For the second time in two days, I left my phone behind! I never do that. How weird. Anyway, I had my watch so... Garmin stats. 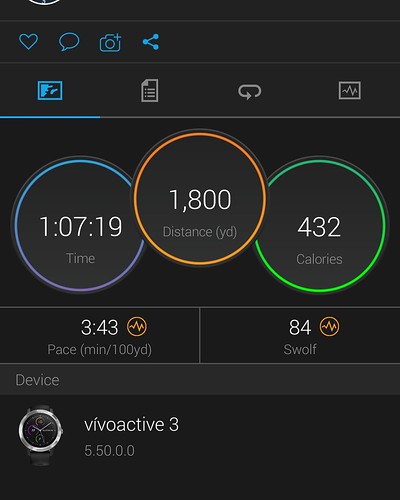 I'm guessing those dark times will be in about an hour or less. The power went out here about 1:45 pm today. I got on Twitter and bitched to Seattle City Light. About 2, they said they were on their way. About 2:15 we were on their oooops outage map. And that's where we sit.

They party is still happening across the street. They have more windows than I do so more light.

I finished my audio book - The Optician's Wife by Betsy Reavley - it was the wildest ride of any fiction I ever read. Appropriate to finish it in the dark for sure.

I'm operating on my cellphone's internet and my embarrassingly large cache of external batteries. Some of them are not as charged up as they should be - note to self, how about a little monthly charging party for these guys? Whaddya say?

It's now 4 and current ETA is 5. I'm not sure how much confidence I have in that ETA.

Soon I'll be here in the dark. Glad that my Kindle has a backlight.

I am so glad I do not have to be anywhere and that no one is on their way over here expecting Christmas lights and a hot meal. I expect this is fucking up some holidays around here. But, not mine.

This is no longer amusing.

So... after they moved the ETA of juice back on to 9:04. I found some cheese and crackers for dinner. Read some more of my audio book. Cleaned up the kitchen a little. Then the status changed to December Fucking 25.

By this time it was 8:30. So I came up with a plan. The place with the pool has a restaurant that opens at 7 am every day, according to their website. So I made a list of everything I wanted to take and figured I'd go to sleep and then grab everything in the morning and head out as soon as I woke up. Worst case, I'd have to spend an hour sitting in the car before the restaurant opened. Maybe I could sit in their lobby.

So I made the list. And turned out the light and settled in. And then my eyes SNAPPED open. The CAR!! How in the fuck was I going to get my car out of the garage, past the electronic door, at oh dark 30. It was worth maybe having to climb those fucking stairs to try.

I thought chances of finding someone down there in the garage to help me figure it out were better tonight than they will be at oh dark 30 on Christmas Day. So I got up and threw on my full length warm swim robe and grabbed my keys and flashlight went down the stairs.

Our garage has 6 different spaces so there are 6 different doors. Sure enough, there was someone cracking the case in the space next to mine. I went over to watch how he did it. It was not easy. You pull on a string and a rusty old latch kind of gives way and then you can manually open the doors.

The trick turned out to be latching it back. It took all three of us (the guy, the woman with him and me) - I held the flashlights on the two key areas and they maneuvered the rusty latch back. It took about 20 minutes and many frustrating tries.

It was enough to convince me that getting my car out was not happening. But, before I could conjure on Plan B, while standing in the garage... the lights came on!!!!!! There was much loud joy. Turns out, we were not the only ones in the garage.

I went and got into my car and drove it out and parked it on the street. Fool me once. This was after I noticed that the apartment building across the street was still very dark. As I type this now at 9:45, they are still dark. Sorry guys! One of those apartments is 12 floors and the other is 24. That's a whole lotta stairs.

The elevators came back on line here instantly so I rode up with a bunch of my neighbors who were all really happy.

Now I have everything plugged in and charging including all the external batteries I used. I do need to make sure I have a selection of movies and TV shows saved locally for next time.

And I'm enjoying the sound of the ice maker working hard after having the afternoon off and the fridge. And Alexa is back. Thankgod I did not need any emergency spelling this afternoon!

Ok. That's it. Now that I have electricity, I'm going to sleep. Ha!
Collapse