Frank is the guy who most often opens up the gym in the mornings these days and staffs the first shift on the front desk. Bridget, the woman who used to clean there always called him the Old Man. He's probably in his 50's and moves like he's in his 60's. I think he's also in charge of the gym maintenance.

He is a letter of the law kind of guy. About half of the gym lights are on a timer and come on at 8 on the weekends and 5 on weekdays. He's always there, behind the counter and ready for a good 5 to 10 minutes before opening but he will not budge until those lights go on. Then he unlocks the elevator and then unlocks the front door. Every. Single. Time.

He's never not there. And he never varies his routine or his words one tiny bit. He is pleasant and nice but has no sense of humor. Just an odd duck. But, those of us standing outside the front door this morning waiting to get in and watching him watch the clock, all agreed, he's a keeper. The weirdo you know. You know?

Anyway, they put up the holiday signs today. Always before they closed on Christmas and New Years. But this year they are open on New Years!! I asked Frank about that and he said they were always open on New Years. ???? Well, I just did an LJ check and sure enough. Old Man Weirdo Frank is 100% correct. He also volunteered that he'll be working that day so I told him we 'of the early birds' were always delighted when he was on duty. I got a nice grin out of him.

I came home and made breakfast and then waited for the Amazon delivery guy. I placed an order yesterday for delivery today and then realized I could order it from Prime Now and use my $5 discount and get it yesterday. So I did but it was too late to cancel the delivery today. So I wanted to meet the delivery and refuse the package. The delivery guy turned out to me one who delivers here a lot and he knew me and was very gracious about my refusing delivery. Done.

bill_schubert has a list of books he's read and enjoyed. I picked one and started reading (listening) it a couple of days ago and I am so hooked. It's fascinating. A well written novel with interesting characters and some interesting plot lines - at least in the first hour and a half. The Optician's Wife by Betsy Reavley

And I'm still working my way through Michelle Obama's book on my Kindle. It's so fascinating. I don't want to get to the end, so I'm only reading it during meals.

Today, I have sewing to do and then I'll finish off the 4th and final (so far) season of Line of Duty. I'm going to miss those fine folks. Happily they are already working on Season 5 for next year. Whew. I did tackle This is Us last night. I ended up fast forwarding through most of the episodes I watched and then skipping a couple. Basically, I think I'd be happy with a plot synopsis and just pass on by all the angst. Anyway, it's no longer taunting me in my to be watched list. 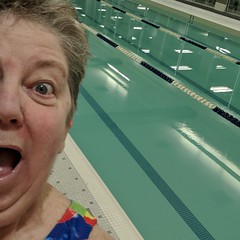 I sewed. I watched the rest of my now favorite TV show ever. I listened to the dog barking next door.

Last night I was woken up by an dog barking incessantly next door. I am a really good sleeper and can usually sleep through anything but this dog was relentless. It's the apartment of the two guys who already are at their max of 2 dogs. One of which was my hand attacker. This was not either of their two dogs, I did not believe. So now they have a third one???? They do not own but rent their unit. And their landlord is pretty twitchy about them anyway.

Then today... it started again. After an hour and a half of constant - like metronome constant - barking, I went and knocked on their door and rang their doorbell. Nothing. Well, not nothing... barking. They have two numbers listed in the directory. One is clearly a wrong number and the other goes to unidentified voice mail.

So... email it is. And I cc'd their landlord. Just as I got to the last line the barking stopped. I guessed it's because one or the other of them came home. I sent it. I did hear back really quickly from Colin saying they were babysitting a friend's dog and he'd gone out to run an errand and he promised he would not leave the dog alone again. Thank you. I'm kind of over you and your dogs.

Meanwhile my hand is starting to itch. My Mom used to say that it itches when it's nearly well again. God, I hope this is one where she was right. I'm tired of wound care. The biggest of the gauges is still prone to re opening if I'm not very gentle with it.

Not much going on this coming week. Wednesday has all the action but the rest of the days are fancy free. Nice.
Collapse