Everytime I feel a twinge in my ear, I'm all YES! Bring it on! I'm going to spill doctor all over you in 3 hours and 30 minutes so give me your best shot. My other ear started to itch this morning so I'm ready to get this all fixed before it kicks in.

Now that the weekend is over, we can get on with my important stuff like my new speakers coming in via FedEx. And those three mysterious packages via USPS. Important stuff!

This morning was banking morning. The first of the month is when my bank accounts get a new infusion of cash. I move it around and pay off stuff. I do keep a daily eye on most all of my accounts but once a month I do a deep dive into everything to make sure all is kosher and I have the money I need in the right accounts for the rest of the month.

All done now. And laundry done. I'm ready for whatever. Bring it on! 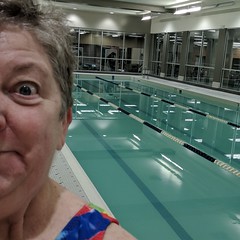 I love the new (at least new at my doctors') scribes thing. First of all today's scribe was an incredibly attractive young man. Nice to have some eye candy. But, also, I love that I get such focus from the doctor. Such a good idea.

Anyway after picking up the ear drops and getting out of there, I was hungry and remembered the new Whole Foods is now open and they have a whole floor of food court and Amazon Prime discount. So I went. It's a pretty place with a huge selection of all kinds of ready to eat stuff. I got sushi for lunch and a pizza for dinner and some cole slaw because it just looked good.

Well the sushi was about the worst sushi I have ever had in my life. Actually, it was about... it was the worse sushi. I hope the pizza isn't as bad. What is it with me and Whole Foods? We're just doomed.

Oh and I did not get a receipt so I have no clue if I got a discount or not. I would have asked for the receipt if I had realized they weren't going to volunteer it.

So I decided to go ahead and make another breakfast casserole and eat a slice of that fresh from the oven for lunch instead of the horrible horrible sushi. It should be ready for eating in about 10 minutes.

But on the up side, I discovered on the way home that an empty cafe on a nearby corner is no longer empty. It had been a weird scary looking place that was only open for a couple of years and then the place sat empty for the last year.

Now it's a fun new burger and shake joint owned by a local chef. I'm so excited. We have one place on the corner that makes a good designer burger but the music is really loud and take out is not easy. But the new place - Megs - looks to be easier, quieter and delicious. Just the kind of place I love. Not tonight because pizza but soon. Maybe tomorrow!

FedEx showed the tracking number as still at the warehouse until they changed it to DELIVERED! Way to tease, FedEx.

The Roku speakers are, indeed, a no brainer to set up and they look nice and they sound nicer. And they have neat little tricks like dialogue enhancement and sound leveling. Totally excellent. And way better than any of the sound bars I've tried over the years.

They came with two remotes, neither of which I really need. But, I have a drawer for Shit I Do No Need Now. So no biggie.

The pizza was really bad but then the only take home cook-it-yourself pizza I've ever had that was not really bad is Papa Murphy's. The Whole Foods pizza was no worse than the rest but still pretty bad. I did not do an actual taste test but I suspect the cardboard under the crust tasted the same as the crust.

Live and learn. I think I've given Whole Foods enough tries. And they have enough love from the public. They don't need me.

Now I'm going to see how the good folks in Line of Duty sound with excellent speakers!
Collapse